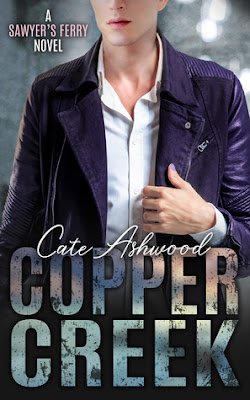 After spending a year jobless and on the edge of becoming homeless, I’d officially reached a level of desperation that, even if I wasn’t completely broke, retail therapy couldn’t fix.

While Sawyer’s Ferry, Alaska, is the last place on earth I’d ever want to visit, when my best friend, Holden, begs me to fly out and plan his wedding, I can’t say no. What I didn’t expect was to stumble into the administrative chaos at Copper Creek Brewing—or its too-hot-to-be-legal owner. Clearly the man needs my help, and I’m willing to go above and beyond. Way beyond.

Six months after my assistant up and quit, I’m not any closer to finding a replacement, and things at the brewery are starting to fall apart. And then in walks Frankie. He’s not the typical guy you’d find in these parts, and he brings with him a world of confusion. Because as much as I need his help, I can’t seem to keep my eyes—or hands—off him.

He’s supposed to be getting my life in order, but instead there’s a chance he could turn everything upside down.

Let's talk about Frankie and Barrett and how much I'm loving Cate Ashwood's Sawyer's Ferry series. Next on the agenda: a cruise to Alaska. It's been FAR too long since I visited.

Copper Creek is so much fun, not just because Frankie and Barrett and their sizzling opposites-attract chemistry but because we get to visit with Gate and Holden again, and they're getting married!

That's why Frankie is in Alaska—to plan the wedding (sort of; this is really just a ruse to get him on a plane so he stops moping around, jobless and depressed, in New York).

What Frankie doesn't expect is Barrett, who's built like a freakin' gorgeous mountain of man muscle. Barrett is drowning in paperwork. Fortunately, it's Frankie to the rescue! Frankie is an administrative assistant extraordinaire after all. He gets Barrett's systems in tip-top shape. Then he sucks Barrett's dick. For free.

Alas, this is one hell of a sexy story, but it wasn't JUST sex: it was lighthouses and spa days and Frankie dancing.

I got a kick out of both MCs and really enjoyed the opposites-attract trope. I mean, could these guys be any more different?

Barrett had only ever dated women before and freaks a little about his newfound bisexuality. He is burly and brews beer and can't imagine leaving Alaska.

But somehow Frankie and Barrett fit. There's no undue relationship angst in this book. The ending is warm and wonderful. I was super sad when the book ended.

My one (minor gripe): I wanted more detail in the epilogue, like did Frankie move in with Barrett? Was he going to continue working as Barrett's admin? I didn't need every box checked, but I was left trying to fill in too many blanks.

Conclusion: I adored this charming, romantic story! MORE hot men in Alaska, please. And thank you.