ARC Review: A Chip and a Chair (Seven of Spades, #5) by Cordelia Kingsbridge 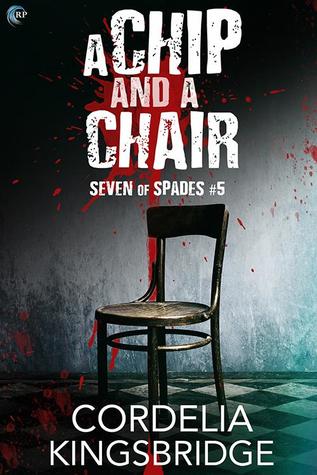 
Detective Levi Abrams and PI Dominic Russo are reunited and more committed to each other than ever, but they can’t truly move forward with their lives until the serial killer who’s been tormenting them is behind bars. When a secret burial site is discovered in the desert with the remains of the Seven of Spades’s earliest victims, that goal finally seems within reach.

But just as the net is tightening, the Neo-Nazi militia Utopia launches their master plan with a devastating act of terror that changes the landscape of Las Vegas forever. As Levi and Dominic scramble to prevent the city’s destruction, they’re opposed by treacherous forces that propel them toward catastrophe. In the end, Levi’s fate may rest in the hands of the very killer he’s been hunting.

We finally know who the Seven of Spades is. And by "we", I mean those of us who have finished the series (or, I suppose, if you've read spoilers, but I'm going to stay spoiler-free). Wow, what an amazing and wild ride it was! Now that I know, I'll say this -- I'm not saying. I'm not saying if they are or aren't the person I suspected. I will say this -- before all is said and done, you'll probably suspect, even if just a little, nearly everyone in the books.

We get a whole lot of questions answered in A Chip and a Chair. A whole lot. We find out who's been behind the SoS killings, we find out why and how and all the little things that we've been wondering. We see Levi and Dominic really solidify their relationship. They are so in sync, one is like an extension of the other. They are brilliant, and I'm thrilled to have gotten to know them.

This fifth installment of this very intriguing series, took a turn I didn't expect. I can't even tell you a hint of the events that happened, but I didn't see it coming. That last 30% was the most unbelievable part of the series, but I went with it and was entertained by it.


I have to say, I've enjoyed the ride that Cordelia Kingsbridge took us on, through these five books. She's a massively talented writer and I have definitely enjoyed getting lost in her words. I'm both happy and sad that I've come to the end, here. I adore Levi and Dominic, and as happy as I am they really got their happy, here, I'm sad that it's time to say goodbye. I will reread, though. I want to binge read this series to see if there was anything I missed and to visit with my guys, and Rebel, again.

If you've been waiting for the whole series to come out before starting -- read it, now -- and avoid spoilers if you at all can. This series is best experienced in real-time. Just go with it. If you've read the first four books, but haven't started this one, yet, what are you waiting for! Go! Read it now!

I loved the suspense, the romance, the angst, the mystery. A Chip and a Chair, as well as the whole Seven of Spades series, is entertaining, and riveting.

Review copy of A Chip and a Chair was generously provided by the publisher, via NetGalley, in exchange for an honest review.