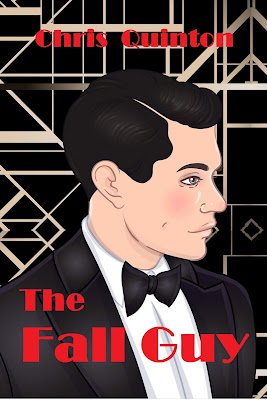 
In 1920s New York, Pinkerton Agent John Brady is assigned to a brutal robbery/kidnapping, an open and shut case with an obvious culprit - but nothing and no one are what they seem.

Small-time crook Cesare Donati has the perfect getaway: a transatlantic cruise ship. When Brady turns up at his cabin door, Cesare knows he is out of options until they reach England.

Will London be a safe haven or a place of reckoning?

I have to admit I’m not really sure what possessed me to want to review this story because it’s honestly two of my least favorite things historical and short, but in spite of that it grabbed my attention and I decided that I wanted to give this one a shot and I’m really glad that I did.

As I’ve said on several other occasions, I’m not a big fan of historical stories, however, that doesn’t mean that I never read or enjoy them, and this one happens to be set during a time in history that has always held more interest for me than most. It’s the roaring 20s in New York, there’s John Brady, who  is not only one of the MCs he’s a Pinkerton agent. I know I’m not alone when I say that the Pinkerton Agency has always held a bit of fascination for me so reading a story that has a main character who’s also a Pinkerton Agent was just too tempting to resist.
When Pinkerton Agent John Brady gets assigned to solve a robbery/kidnapping…a case that should have been open and shut quickly becomes complicated for him when he meets a small time crook Cesare Donati who is attempting to smuggle Alice a person of interest in Agent Brady’s case but what really complicates things as well as what Agent Brady learns from Cesare and Alice about his case is the attraction that John and Cesare share for each other.


I have to admit when I saw that there were less than 40 pages in this story, I sincerely questioned how the author was going to make this one work…I mean, let’s be honest 32 pages means that every word has to count; overall I was impressed by the job that the author did of making each and every word work for the story. While I did get a good sense of the characters, the setting in terms of time and place I would have really loved more. Again, while the story was complete as it was, I can’t help but believe that more would have been even better, and all this is not to say that what was there wasn’t good no more to the contrary…it was good enough that it had me wanting even more.
At 3.5 stars this was a good story…actually a bit above average and given that there are fewer than 40 pages that’s not to shabby, but I can easily see that with a bit more filling out of the plot, the characters and the relationship this could have easily been a 4 or even 5 star read. I must admit I’ve only read a couple other stories by this author and each time I’ve been left both suitably impressed and wanting more…all in all not a bad thing for an author to do.
*************************
A copy of ‘The Fall Guy’ was graciously provided by the author in exchange for an honest review.