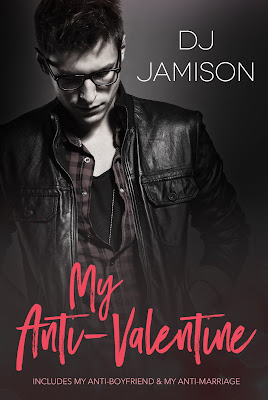 My Anti-Valentine: Jaded by relationships gone wrong, Bret throws an anti-Valentine's Day party to celebrate being single and burn his ex-boyfriends' belongings. Bret's low interest in sex has destroyed every relationship he's had and tarnished his view of romance, but a cute blond guy at the party who says all the wrong things inspires him to hope for more.

My Anti-Boyfriend: Brad has everyone fooled. He's the casual, sexy friend. The fun-time guy who sleeps around. Except not really. There's one man who holds his heart: his best friend -- with benefits -- Riley. Too bad Riley has no interest in a relationship, and as far as Brad can tell, never will. But once Brad acknowledges his feelings for Riley, he can't continue to ignore them. Riley's days of having his cake and eating it too are over. Then again, maybe Brad is tasty enough to keep a man satisfied.

My Anti-Marriage: Love has never been a good bet for Chris, so going on a Vegas wedding trip for his friends is bittersweet. Especially when Ant, the last man to break his trust, is suddenly along for the ride. Which explains why Chris wakes up in his hotel room with the mother of all hangovers. Not so much why Ant is in his bed ... or worse, wearing a matching wedding band.

Bret pointed an accusing finger. “No couples! This is anti-Valentine’s Day. You can take your cards and your candies and your flowers and go to one of the bajillion places celebrating loooove tonight.”

“Ew, no,” Darla said with a laugh. “Harry is my cousin, not my boyfriend. I wouldn’t break your rules, anti-love guru!”

Bret did love the name Harry, mostly when applied to a boy wizard with a lightning bolt scar on his forehead. He gave Harry another onceover, noticing his sky-blue eyes and perfect cheekbones. Nope. Still didn’t like him, especially the frown that was twisting his features.

“Someone must have done a number on you,” he said.

Bret bristled. “Why do you say that?”

“I mean, to be this bitter about Valentine’s Day? It’s hard to imagine you really hate the commercialism of the holiday that much. I bet if you had a girlfriend it would be a different story.”

Bret rolled his eyes. “It really wouldn’t. Romance is a manufactured concept, you realize that, right? You might love someone, but if you do, you should appreciate them every day, not once a year with the most predictable gifts ever. That’s without even getting into the origins of Valentine’s and how very un-romantic it actually is.”

Darla grabbed a drink from the counter and swatted Bret’s butt playfully. “I’m going to leave you boys to it. If you get over your romance phobia, Harry’s on the market, and he hasn’t landed a nice guy in ages, so he’s pretty much a sure thing.”

“Darla!” Harry shouted after her, his cheeks turning bright red. “What the hell? Jesus, that’s not how I usually …”

He’d thought he was engaging in friendly debate with a straight guy, only to discover he’d been bantering with someone cute, available, and gay. And that wasn’t at all the point of this party.

“Um, you know. Tell people I’m gay, or that I’m available. I definitely try not to go the ‘I’m so desperate I’ll take anyone route,’ but Darla seems to have taken care of that for me.”

He cracked a smile. It was crooked, a smidge embarrassed, and way too charming for Bret’s well-being.

“I’m not interested,” Bret said stiffly. “This is an anti—”


“I know!” Harry said, holding up his hands. “I’m not actually desperate.”

Bret stopped short, frowning. Was Harry implying he’d have to be desperate to like Bret? Ouch. He wasn’t Abercrombie and Fitch material like Harry, but he didn’t think he was that bad.

“That came out wrong,” Harry rushed to say. “You’re cute in that nerdy hipster way.”

“Unbelievable,” Bret muttered under his breath.

“I mean it,” Harry said, misunderstanding the reason for Bret’s shutdown. “I would totally do you.”

Bret avoided his gaze. “Thanks, but no thanks.”

He made a quick exit from the kitchen, more than ready to get the real party started now that everyone had arrived.

“Hey, who wants to burn some shit?” he called out, grinning when a round of cheers went up.

Brad had everyone fooled.

He wore his sexuality like a disguise. The short shorts, making his ass look fine and flashing perfectly tanned skin 12 months a year? The mesh shirts, the halter tops, the extra-tight T-shirts that showed his lithe form and nipple rings? Yeah. It was all the equivalent of his bat ears, cape and tights.

Well, tights worked for every disguise. But that wasn’t the point, he reminded himself. It’s just that tights can be so distracting, and Brad — like a playful kitten — could be easily distracted by shiny objects or balls of … well, not yarn. More like balls of Riley.

Too bad he couldn’t fool himself.

Brad watched Riley grinding on another slender guy with platinum blond hair and sultry lips on the dance floor of Club Ozone. A guy who wasn’t him. And his heart panged.

He threw back another shot to drown that feeling ASAP and flashed a grin at the two guys at the table with him.

He’d come out with his regular circle of friends. For the past few years, he’d met up with Riley, Chris and Harry for a few drinks before they each went out to pick up a man. Then Harry met Bret, his boyfriend of a little more than a year now, and he gave up their regular nights out.

Tonight, he and his boyfriend were both there, having been guilted to attend, so Brad had to put on a cheerful face. Just one more element of his disguise.

“You guys ready to get your dance on?”

Harry looked at Bret, and his boyfriend shrugged. Bret was a real cutie, and he could crack up a whole room at a board game night or house party, but put him around a bunch of sweaty, half-naked men and he went quiet.

“Maybe in a few,” Harry said with a smile.

He leaned in and kissed Bret’s cheek. Gag. Who needed that kind of affection, right?

Pang.
Brad jumped up. “Okay, party poopers. Catch you on the other side!”

He stormed onto the dance floor, ready to burn away his sudden onset of melancholy. A good adrenaline rush and an erection rubbing against his ass would take care of him in short order. After all, why should he care that Riley was sexing up his next conquest on the dance floor? That’s what he did. That’s what they both did.

They agreed years ago that hearts and flowers were not for them. They were friends, wingmen and occasional fuck buddies.

But that was all.


EXCERPT FROM MY ANTI-MARRIAGE

“No, problem not solved. We’re still married.” Chris’s breathing sped up. “We have to undo it!”

Ant guided him to the bed and pushed him down on the edge. Squeezing his shoulders, he met Chris’s eye.

“Come on now. Maybe this isn’t what it looks like.”

Chris laughed harshly. “I know that line is like your bread and butter as a player, but it’s always what it fucking looks like. Why the fuck else would we be wearing wedding rings?”

“Do you remember last night?”

“Some,” he said grudgingly. “I remember hitting every casino we passed on the strip and taking a few shots at each one. You were hell-bent on checking out wedding venues for Brad and Riley. Maybe we took that too far, huh?” Ant smiled wryly. “What about you?”

“Not much after you found me at the fountain,” Chris admitted. “You were playing the responsible sober guy card with me, trying to get me to go to dinner. So, how the hell did we end up here?”

“My guess? You were totally unreasonable,” Ant said.

Ant rolled his eyes. They were getting off-track. “So, we both have a few memory gaps,” he said, massively understating the issue. “I’m sure I’ll remember eventually. Or you will.”

Chris sighed. “What now? Everyone’s waiting on us downstairs.”

Ant shook his head. “Brunch first. Try to act normal. No one has to know. Divorce can wait for dessert.”

“Annulment,” Chris corrected. “Annulment makes it like it never happened, right? I want that one.”