We are delighted to reveal the new cover for Marie Sexton's

being re-released by Dreamspinner Press

Includes the Coda series prequel novella, Meant to Be

Jared has simple goals for his freshman year of college: make friends, lose his virginity, come out, and maybe fall in love. He doesn’t anticipate getting caught between his friend Bryan and Bryan’s flamboyant ex. Through the awkwardness, Jared learns love doesn’t always mean sex and the most meaningful connections might have nothing to do with romance.

Jared Thomas has lived in the mountain town of Coda, Colorado, his whole life. He can’t imagine living anywhere else. But Jared’s opportunities are limited—the only other gay man in town is twice his age, and although Jared originally planned to be a teacher, the backlash that might accompany the gig keeps him working at his family’s store instead.

Then Matt Richards moves to town.

Matt may not be into guys, but he doesn’t care that Jared is. A summer camping and mountain biking together cements their friendship, but when Matt realizes he’s attracted to Jared, he panics and withdraws, leaving Jared all too aware of what he’s missing. 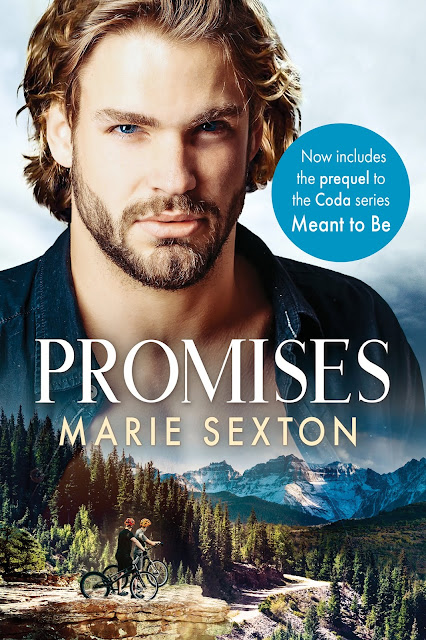 Marie Sexton is the author of over thirty published works. She’s written contemporary romance, science fiction, fantasy, dystopian fiction, historical short stories, and a few odd genre mash-ups. The one thing they all have in common? They all feature men falling in love with other men. Her first novel, Promises, was published in January 2010 and is considered a classic in the gay romance genre.

Marie is the recipient of multiple Rainbow Awards, as well as the CRW Award of Excellence in 2012. She was also a finalist for a Lambda Literary Award in 2017. Her books have been translated into seven languages.

Marie lives in Colorado. She’s a fan of just about anything that involves muscular young men piling on top of each other. In particular, she loves the Denver Broncos and enjoys going to the games with her husband. Her imaginary friends often tag along. Marie has one daughter, two cats, and one dog, all of whom seem bent on destroying what remains of her sanity. She loves them anyway.