Blogtour: The Truth Beyond The Bitterness by Emory Schneider

The Truth Beyond The Bitterness 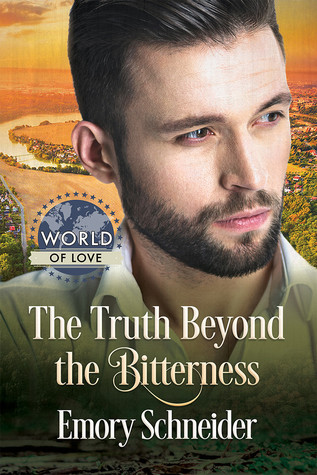 Can love erase a lifetime of fear and bitterness?

Kuba flees the oppressive influence of his strict Catholic family as soon as he graduates high school. In the big city of Pilsen, Czech Republic, he can get a fresh start. Although he is fairly content sharing a flat with his coworker and filling it with books, he knows he’s destined to be alone unless he can come out of the closet. But he just isn’t ready to bare his soul to the world.

When he meets his roommate’s friend Emil, he begins to reconsider. Is a chance at romance with the gorgeous man—and fellow bibliophile—incentive enough for Kuba to face his demons?

Traditional Czech given names tend to be three syllables long because they consist of two words glued together. That isn't much when you look at other languages, but we like to use shorter versions people made up.

I saw Hynek in his blue-and-white baseball cap, blue vest, and jeans heading toward me through the crowd of impatient people who were desperate to get out of the area and into one of the crammed buses.
“I was starting to wonder if you had decided to take some extra hours.” I smiled at him.
“Are you nuts, Kuba?” My given name is Jakub, but everyone in the Czech Republic loved diminutives. Talk with them in a friendly manner for two minutes and they stop using the proper form of your name. “I wouldn’t stay in this madhouse any longer than I have to. Those people are driving me crazy.” Hynek grimaced and shook his head.
“Fine, let’s get to the store or there won’t be anything left,” I said once I’d stopped laughing at his extreme reaction, and we walked to Tesco for some beer and snacks.

When diminutives appeared in the language, there were used for small children exclusively. Even spouses would call each other Jaromír, Stanislav, Milena or Ludmila. That changed so much during the last decades, it became common to use the diminutives not just for your friends and family members, but also for your coworkers.

One of the reasons to do use them is to distinguish people with the same or similar name. When I was small and my brother and I were playing with the kids from the neighborhood, there would be this magical mix of Jardas and Mílas. Basically, we called them Jarda, Míla, Milan, and Jaromír, so they would always know which one they talk to in a game. Lately, when Jaromír started playing ping pong, there was also Jaroslav, but no Milan, Emil, or Miroslav, so they called them Slávek (for Jaroslav) and Míra (for Jaromír).


When I started working in my current job and met my coworkers Jaroslav, Josef, Lubomír, and Ondřej for the first time, they didn't even introduce themselves to me with those names. Right from the first minute, they were Jarda, Pepa, Lubo, and Ondra.

Emory Schneider was born in Děčín, the Czech Republic, as the fourth of five children and later moved to the western part of the country to find a job. They ended up working as a brazer in Pilsen—yes, the home of the beer. Emory spent a lot of their childhood discussing possible scenarios for cartoon and manga series they watched with their brother and pretending they were a knight or a spy. Their love of books and stories in general motivated them to learn English, although they had nearly failed the subject for two years.

During their teenage years, they started to make up M/M romance stories, but it took them several years to put any of them on paper. When not working or writing, Emory tries to fight their laziness and burn some calories they probably gained from staring at chocolate bars at the shopping mall or drinking some of the Coke they bought for their husband.