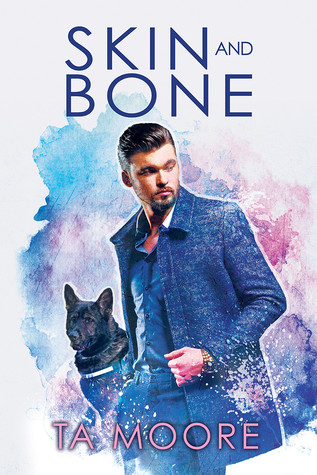 Cloister Witte and his K-9 partner, Bourneville, find the lost and bring them home.

But the job doesn’t always end there.

Janet Morrow, a young trans woman, lies in a coma after wandering away from her car during a storm. But just because Cloister found the young tourist doesn’t mean she’s home. What brought her to Plenty, California… and who didn’t want her to leave?

With the help of Special Agent Javi Merlo, who continues to deny his growing feelings for the rough-edged deputy, Cloister unearths a ten-year-old conspiracy of silence that taps into Plenty’s history of corruption.

Janet Morrow’s old secrets aren’t the only ones coming to light.

Javi has tried to put his past behind him, but some people seem determined to pull his skeletons out of the closet. His dark history with a senior agent in Phoenix complicates not just the investigation but his relationship with Cloister.

And since when has he cared about that?

First of all, thank you so much for having me! I’m thrilled to be here with Skin and Bone, the second book in the Digging up Bones series. Authors should probably be like parents in that they never admit any book is their favourite, but I love this series. It was great fun for me to revisit them in Skin and Bone and I hope you guys enjoy seeing them again too!
For this blog tour I have written a short story called ‘Sticks and Stones’ where you can see what Javi and Cloister were up to between books!

Sometimes even Javi found being around himself unbearable. It wasn’t that he couldn’t help himself, he just never wanted to until it was too late.

He tossed his jacket into the back of his car and followed Cloister around the side of Judge Ellie Buchanan’s appropriately nice house. The flower beds had been trampled by careless boots, but they’d obviously been well-tended with lavender bushes and anthuriums. There was only a spare patch of grass, yellowed around the edges from the hot weather, and an empty kennel with no bowl outside it.

Put him on the spot and Javi would probably call the judge a friend, even though he’d more inherited her from Sol than made her himself, but it was ring-fenced to their respective workplaces. The furthest outside of that sphere they’d gotten was a coffee at the stand outside the courthouse, while Ellie enjoyed an espresso and the cigarette she bummed from the barista and Javi pitched his case for a search warrant.

She’d never mentioned a dog. Or the death of one.

That was probably the sort of thing you told someone who you were friends with.

“That came out wrong,” Javi said as he stepped over the still-raw stump of a cut down tree.

Cloister glanced back over his shoulder. “No it didn’t,” he said. “You were being an asshole.”

From anyone else that would have put Javi’s back up. He had, after all, made the effort toward an apology. Sort of. The least whoever it was could do was acknowledge that and let it go. After all, why even try if it was going to be thrown back into your face.

Cloister got away with it. Probably because he was so matter-of-fact it sucked the emotional charge out of the moment, and let Javi with nothing to hide the fact that...yeah, he had been...behind. That and--Javi let his gaze follow the lean line of Cloister’s back down to the firm curve of his ass--Javi wanted to push him up against a tree and kiss an apology into his mouth.

Or, at least, kiss him until he forgot he was owed an apology.

“We agreed that it was better if no-one else knew that we’d hooked up,” Javi said. That got him a snort. Javi had set the rules, Cloister had shrugged that he didn’t care. He didn’t either. Other people’s opinions weren’t something that Cloister bothered with, whether it was about his personal life or the fact most of his off-duty t-shirts were second-hand Disney ones. Javi admired that sometimes, but that sort of bullet-proof disregard didn’t work when you had ambitions beyond a trailer and a fridge full of cold beer. “But I take the professional distance a bit...too far...sometimes.”

Cloister turned around and walked backwards. The moonlight softened the harsh lines of his face, smoothed out the broken cant of his nose. It didn’t make him pretty all of a sudden, but it made him look softer, younger. The ghost of who he might have been if people had tried harder not to hurt him.
Then he smirked, an amused cant of that beautiful mouth, and Javi was reminded why he was OK with this slightly more battered Cloister.

“No, that’s about right,” he said. “Trust me, people are going to jump to the conclusion we’re screwing way before it would occur to them we might be friends.”

Javi swallowed a brief, unexpected urge to ask ‘are we’. It wasn’t as if it should matter, certainly not right now. He folded the brief moment of tension up and put it away. His not-quite-tendered apology and Cloister’s not-quite-voiced admission of their relationship cancelled each other out, he decided.

“Did Mary-Anne tell you anything that we didn’t already know?” he asked.
People did. Cloister looked like a biker in search of a bar room brawl, but small children and scared women trusted him. Maybe it was the dog.

Cloister stopped as they reached the gate at the end of the path. It was all plain, grey metal tubing and wire, obviously the service entrance. There was a shiny new padlock clipped onto the lock, but it hung open. Javi made a mental note to get Tancredi down here to fingerprint it.


“People are scared when someone goes missing,” Cloister said. “They’re nervous when they don’t want you to know why they’re missing. She’s both.”

Javi swore under his breath as he pinched the bridge of his nose between his finger and thumb. He wished it was concern for Ellie that took priority in his brain, but the potential hassle of a pending retrial shouldered it out of the way. It had been hard enough to convince people to testify against Si Franks--who ran drugs for the cartels, the Ukrainian mob, and had ties to Russia as well--the first time.

Hard enough to keep them alive long enough to testify. Two of Si’s runners who’d agreed to speak up had been first beaten, and then poisoned in the prison. One of the clients he’d pressured for favors, both sexual and professional, who’d come forward had his family threatened and a dead rat left in his office.

“I need you to find Ellie,” he said. “Without her we’ll need to appoint another judge, and Franks’ lawyers will push for a retrial. We could lose him, and all the cartel information that’s in his head. I cannot afford that.”
Cloister crouched down next to Bourneville and rubbed her ears affectionately as he checked her collar and harness.

“Oh, well, in that case,” he said. “Because I was just going to take the night off and head home early. For you, though, I’ll do my job.”

There was no-one around. The rest of the deputies had been left to secure the house, just in case. Javi reached down and tangled his fingers in Cloister’s dark blond hair.

“Pretty sure there’s not room for jerks in my bed,” he said as Cloister looked up at him. “You know what I meant. Do your best.”

“I always do,” Cloister said.

That was his problem. Javi nodded his acknowledgement of that and stepped back. He loosened his collar and undid his cuffs as Cloister showed the shirt to Bon. She poked her nose into and snorted eagerly at the scent worked into the fabric.

After a second Cloister took it away and sealed it into a plastic bag. Bourneville waited, ears up and tongue out, as Cloister tucked the bag inside his shirt and scrambled to his feet. She was too well-trained to lean against the leash but her tail trembled with eagerness to wag.

Bourneville dropped her nose to the dirt and gave it a perfunctory sniff. She barked once, a sharp ‘come on’, and darted out through the gap in the gate.
Cloister broke into an easy, ground-eating jog as he followed her. After a few steps he unclipped a torch from his belt and flicked it on to illuminate the ground under his feet.

Javi resisted the urge to follow. He wasn’t suited for a run and while he could keep up for a while--he was fit, but Cloister ran like it was a religion--there were more useful things he could than follow Cloister’s ass.

Not as fun maybe, Javi thought with a flicker of humor as he cocked his head to the side to admire the moonlit view.

A flutter of lust warmed Javi’s stomach for a moment. It was short-lived, as the weight of other responsibilities pushed it down. It wasn’t like Ellie to be unpredictable. Even her clandestine smoke breaks were once a week, and from a pack she’d given the barista to keep for her.

If Cloister was right that Mary-Anne had something to hide, it was possible that Si had gotten to her. Prison bars and security guards was an obstacle to Si’s influence, but a drawer full of dead rats in an accountant’s office was proof it wasn’t enough. If something happened to Ellie that would be a eighteen months of investigation gone to waste, and there was no guarantee that Javi could make the case stick a second time.

It wouldn’t exactly do Ellie any good either.

Javi grimaced, took one last look after Cloister, and then turned to stalk back down the path toward the Buchanan household. He needed to find Ellie before either of those things happened. Javi didn’t want to know what he cared about more. He had a feeling it wouldn’t reflect well on him.

TA Moore is a Northern Irish writer of romantic suspense, urban fantasy, and contemporary romance novels. A childhood in a rural, seaside town fostered in her a suspicious nature, a love of mystery, and a streak of black humour a mile wide. As her grandmother always said, ‘she’d laugh at a bad thing that one’, mind you, that was the pot calling the kettle black. TA Moore studied History, Irish mythology, English at University, mostly because she has always loved a good story. She has worked as a journalist, a finance manager, and in the arts sectors before she finally gave in to a lifelong desire to write.

Coffee, Doc Marten boots, and good friends are the essential things in life. Spiders, mayo, and heels are to be avoided.