Audio Review: A Fool and His Manny by Amy Lane 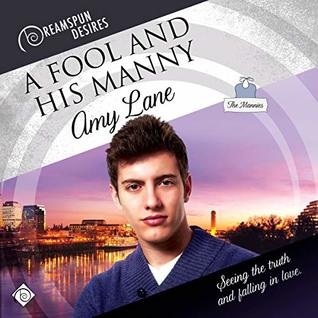 
Seeing the truth and falling in love.

Dustin Robbins-Grayson was a surly adolescent when Quinlan Gregory started the nanny gig. After a rocky start, he grew into Quinlan's friend and confidant—and a damned sexy man.

A Manny and his Grump, more so than 'A Fool and His Manny' but no matter what you call it this was a totally enjoyable story.

Amy Lane is another one of those authors who just never fails to delight me. I've been enjoying this series on audio and while I have to admit there is one that I haven't listened to the audio yet, I'm feeling fairly comfortable saying that this one...right here is my absolute favorite of the series...not that I haven't enjoyed them all, just that I've enjoyed this one more than the rest.

While you could probably read this book without reading all of the other stories...I would strongly recommend books 1 and 3 at the very least and I say this  based on the fact that book 2 is the one that I missed and while I wish I hadn't I can also say that I had no problems following the story in this one or knowing who was who because there are a number of characters from the previous stories in this one.

First off there's Quinlan (ir Q as Dustin likes to call  him)...he's one of the MCs in this book but he's also Sammy's best friend and we met him in a previous story and it's Sammy who helps Quinlan get the job as manny to Nica and Jacob's six children...one of whom happens to be the grouchy Dustin a 14 year old with an attitude...cause this is a rare creature...NOT!!!

So here we are a few years down the road Q's  settled in to his position as Manny for the Robbins-Grayson family and whether he realizes it or not that same family has taken him not only into their home but he's securely entrenched in their hearts as well. Especially that of the no longer 14 year old Dustin.


Dustin's quietly watched Q from the sidelines for years and he's been paying attention to all the things that Q's done quietly and without hesitation over the years to help make his family work but he's seen more than that. He's also seen the pain, loneliness and heartache that  Q's tried to hide over the years and as he grows and watches he begins to realize that he wants to be the one to care for Q, to soothe his heartache and ease his pain. Finally the day comes and Dustin's decided that he needs to make his move.

While this may sound off-putting to some there are a couple of things that factor into the dynamics and made a world of difference for me...
1. There's only a 6 year age difference between Q and Dustin.
2. Dustin's the one who makes the first move and when he does he's around 20 years        old and initially Q is a bit resistant to a relationship between the two men and make        no mistake bout this by the time things happen between these two...Dustin is    definitely an adult.
3. Everyone should have a Dustin in their life. (kidding...well maybe not).

For the most part I've found all of the characters in these stories to be absolutely delightful but Dustin and Q are just so damned perfect together. The care and consideration that Dustin gives to Q might have let me a melted puddle of goo on more than one  occasion and Q...damn, I want to be his momma...because he got so freaking short changed in the parent department it was just heartbreaking.

There was honestly only one thing about this story that I really didn't like...passionately didn't like and that was Qs mother...she's getting added to my 'whack a biotch game' ...because DAMN that woman was rage inducing!!! I could rant about her for more than a few paragraphs but I'll spare you all the rage and just say 'read the story!' then we can rage together.

'A Fool and His Manny' is my fourth audio book narrated by Kenneth Obi and as with the previous stories he's definitely done this one justice. I like the level of depth and emotion that his narration brings to a story giving it a balance that's not always achieved on audio books with the voices conveying just enough emotion to draw the listener in without it being too much or too little. It's a balancing act and Mr. Obi seems to be  mastering it quite nicely.

Amy Lane does something that few other authors can do...she creates a world that has a place for everyone...a place where they can be safe, loved and sheltered. Where even if the family you want isn't the one you were given you can have the family you want and the love we all deserve. It's not an impossible thing...just a thing that doesn't exist...yet.

An audio book of 'A Fool and His Manny' was graciously provided by the publisher in exchange for an honest review.