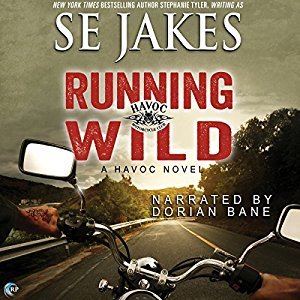 Sean Rush is an adrenaline junkie. That’s why he was in the Army, why he steals and races classic muscle cars . . . and why he can’t stay away from bad boy Ryker, a Havoc Motorcycle Club lieutenant. Fortunately, Ryker can’t seem to stay away from Sean—he’s spent the last eight months breaking into Sean’s apartment and stealing into his bed, leaving Sean physically satisfied but increasingly restless.

Sean has always avoided relationships. He likes to come and go without being controlled. And Ryker is possibly the most controlling man he’s ever known. Still, he finds that he wants more from Ryker than their silent nighttime encounters.

Then one of Sean’s thefts goes bad, and Ryker’s protective instincts kick into overdrive. He takes Sean to the Havoc compound, determined to keep him safe. But Sean’s past threatens the safety of Havoc—and everything Ryker holds dear. Worse, Ryker’s hiding secrets of his own. Soon it’s obvious that the adrenaline rush can’t keep them together anymore. But maybe love can.

Running Wild held just a bit to much chaos for me...

'Running Wild' is the first book in the series Havoc by S.E. Jakes.  Sean Rush is a bad boy adrenaline junkie who steals and races cars...preferably classic muscle cars and is drawn to Ryker a lieutenant in the Havoc Motorcycle Club who coincidentally enough can't seem to stay away from Sean.

I have to say I definitely found this to be a bit of a fantasy world. But what the hell it's fiction and if vampires can sparkle than bikers can be good bad boys...right? It could happen. I have to admit I found it damned lucky for Sean that Ryker was so into him because seriously he saved Sean's backside on more than one occasion.


When all was said and done I definitely liked Ryker more than Sean and even Sean didn't frustrate me as much as his friend Noah...seriously with friends like Noah one would do well to skip the enemies.

Sean's actually trying to stay on the right side of the law but eventually thanks to a friend he gets dragged back into his past and thankfully Ryker's on hand to guard his six because things aren't adding up in Sean's favor and if not for Ryker there's a good chance that Sean wouldn't survive events long enough to find out who and why someone wants him dead.

All this made for enough action and interest to keep me listening...well this and Dorian Bane's narration giving the MCs each their own unique and voice that...and forgive me if I'm stereo-typing here but I liked that each of these men had voices that I as easily able to attach to someone of their character and image. Their voices were gravelly and husky at times giving a hint of danger and other times they held the promise of sex. For me Mr. Bane definitely nailed it with his vocals for these men.

In spite of all this there were times that it just felt like these wild boys were just a bit too tame. While I enjoyed listening to this on audio I can't honestly say that it would have been as enjoyable to sit and read the story. For me this one definitely benefited from the narration.