Audio Book Review: Road of No Return by K. A. Merikan 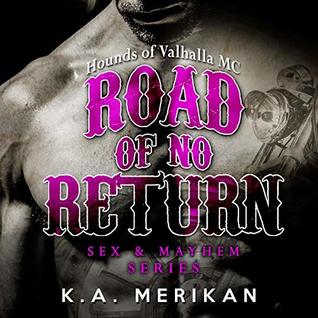 Stitch. Outlaw biker. Deep in the closet. Doesn’t share his property. On the day of Stitch’s divorce, lust personified enters the biker bar he’s celebrating at. Tattooed all over, pierced, confident, and hot as hellfire, Zak is the bone Stitch has waited for life to throw him. All Stitch wants is a sniff, a taste, a lick. What follows instead is gluttony of the most carnal sort, and nothing will ever be the same. Forced to hide his new love affair from the whole world, Stitch juggles family, club life, and crime, but it’s only a matter of time until it becomes too hard. Zak moves to Lake Valley in search of peace and quiet, but when he puts his hand into the jaws of a Hound of Valhalla, life gets all but simple. In order to be with Stitch, Zak’s biker wet dream, he has to crawl right back into the closet. As heated as the relationship is, the secrets, the hiding, the violence, jealousy, and conservative attitudes in the town rub Zak in all the wrong ways. When pretending he doesn't know what his man does becomes impossible, Zak needs to decide if life with an outlaw biker is really what he wants. As club life and the love affair collide, all that’s left in Zak and Stitch’s life is mayhem.

Let's start with the stars...

I cannot lie, I struggled with this one...more so than I've struggled with any book in a while...so at the end of it all I'm giving the story 2.5 stars because...it was ok at best and 3.5 stars are for Wyatt Baker. The narrator for this and a new to me narrator at that. Mr. Baker gave this story character, color, depth and definitely added to the interest.

To say that there were things I liked and things I didn't enjoy in equal measure is a definite understatement. So let's start with one of the MCs...'Stitch' I had a lot of thoughts about Stitch...most of the time I found him to be annoying, irritating, self absorbed beyond belief and from start to finish I never warmed up to this character even when we got those glimpses of him with his little girl...truly the only redeeming moments that Stitch was given...well, those and the occasional interaction with with his ex-wife...but still when all was said and done for me Stitch's annoying as hell factors were more and far greater than the few moments of 'hey maybe...just maybe there's a decent person here...nah, forget it the moment passed.'

Now I have to say for the most part I did like Zak a lot more than Stitch but still not finding my self to be overly concerned with his happiness and well being. Truth be told I was kind of hoping that Zak would cut his losses and move on where Stitch was concerned...needless to say I was disappointed.

The overall plot of a biker trying to leave his gang and find a better life for himself was what intrigued me and had me wanting to listen to this audio book and while the story didn't work as well for me as I'd hoped it would I am more than willing to give props to the authors for not shying away from the fact that life as a biker is violent, brutal and dangerous in ways that few of us can truly imagine...it's not glamorous and fun, there are no heart and flower moments to be  had and often times it's a life that's almost impossible to escape.


I once had a friend tell me about how his sister left home with a biker when she was sixteen. He also told me about how she came home a year later...just a year and at the end of it all how he explained it was that she came home 'a lot older and a lot wiser' and maybe it wouldn't have seemed so bad if he didn't have tears in his eyes when he told me this. We never talked about it again but it always stayed with me and I found myself remembering that conversation as I listened to this book and as I listened to the last part of the story I really didn't need to use a lot of imagination to imagine the level of violence portrayed as being something that could be possible...so while there were a lot of reasons that this wasn't a viable story for me it was definitely a story that I could imagine as being something firmly entrenched in reality.

So in spite of my dislike of Stitch and a couple of the other members of the 'Coffin Nails' I can definitely respect the effort that went into creating this story and as I said at the beginning the narrator absolutely did the story justice so props to all...this one may not be my thing...it's definitely a thing and if you're a fan of these authors and this series you should probably check out the audio and decide for yourself whether or not it's your thing.


An audio book of 'Road of No Return' was graciously provided by the authors in exchange for an honest review.