Audio Book Review: Love You So Special by Tara Lain 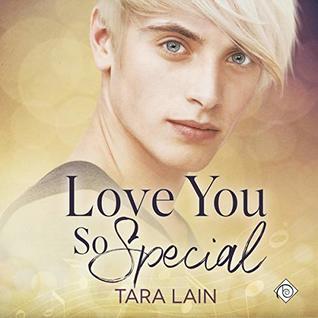 Can a man’s secret yearnings be revealed in a tank full of fish?

Artie Haynes knows he’s nothing special, with just-your-regular-brown hair, a solid plumber’s job, not much education, and a family that can barely get off the couch. But Artie has quirks—like his love of tropical fish, a landlord who’s a professor of existentialism, a passion for the amazing piano music he hears at a concert hall while he’s fixing the bathrooms—and the fact that he’s never come out as gay and probably never will. But when he’s hired to build a guesthouse for the pianist whose music enchanted him, Artie is swept up into an unimaginable world.

Francois Desmarais may be famous, rich, and revered as one of the world’s great classical composers and pianists, but he’s soothed and challenged by the inquisitive, stalwart, protective man in his back yard. When Francois’s terrible fear of crowds turns into a dangerous plot, Artie can stay in the closet or prove just how special he is.

'Love You So Special' was simply beyond cute.

Artie's a blue collar worker and he knows there's so much more out there in the world, but it's not for 'average hard working people like him' but when circumstances conspire to present him with the opportunity to hear just a little of the music that makes his heart soar and brings him to life...Artie's no fool either he doesn't pass up the chance to . I really liked Artie with his fish tank full of pet fish and how he looks out for his landlord who is a retired professor of existentialism. If I could pick a little brother I think it'd be someone like Artie. He's just a really awesome guy...he's kind, hardworking and a son that would make any parent proud, he's pretty damned selfless.

When Artie gets a chance to do some renovation work at the home of Madame Desmarais and more importantly her talented son Francois, who also happens to be a world renowned composer and pianist whose fear of crowds makes performing live an absolute nightmare for him the two become friends and Francois very quickly realizes that not only does he enjoy Artie's company but Artie soothes his soul in a way that no one else ever has and for Artie, Francois sees so much about him that is good and noble. Francois knows that Artie is someone who he would be proud to have not just as a friend, but maybe even as a boyfriend.

One of the things that I noticed with this story was that I felt a bit more engaged with the secondary characters such as Francois' mother, Artie's landlord...I think he was totally adorable and Artie's family in general ended up to be a pleasant surprise.

'Love You So Special' was a nearly perfect blend of romance, drama and comedy that kept me engaged from start to finish and it seems that for this listener it was the perfect entertainment for a Valentine's Day afternoon. At 5 hrs. and 18 mins. it was long enough to provide an engaging and well filled out story but not so long that it became boring at any time.

Admittedly there's a bit of a plot twist towards the ending of this story that was really a bit of take it or leave it for me, I can honestly say that I'm torn on how much I really thought this helped the story but in the end it was there and I guess more than anything I viewed it as a bit of a speed bump something that was on the path and while it may have slowed the journey down a bit, it wasn't enough to stop things completely and once your past it you carry on and the rest of the trip is a smooth ride.

As with the previous books in this series the narrator was once again Rys Forest who once again has given substance to the characters of this story and created a very enjoyable listening experience that I look forward to revisiting in the future along with the previous stories in Ms Lain's 'Love You So' series.

An audio book of 'Love You So Special' was graciously provided by the publisher in exchange for an honest review.