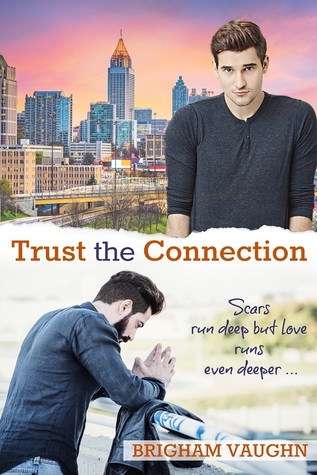 
After a lifetime of being told he’s worthless, Evan Harris is forced out of the closet and the only home he’s ever known. Jobless and homeless, he makes a desperate call to a couple he barely knows. They give him a place to stay at their place in Atlanta while he gets back on his feet. But he’s too shy to explore the big city and go after what he wants: a relationship.

Physically and emotionally scarred from a devastating car accident, Jeremy Lewis struggles to reconcile the brash, outgoing man he used to be with the social recluse he’s become. He’s resigned himself to being alone, but an encounter with an ex-boyfriend shakes up his dull existence and brings Evan into his life.

Loneliness draws Evan and Jeremy to each other, but a strong mutual attraction isn’t enough. At thirty-six, Jeremy is convinced a relationship would be holding twenty-one-year-old Evan back.

Evan must be strong enough to fight for what he wants and Jeremy must let someone close enough to see his scars. Otherwise, they’ll miss out on the love of a lifetime.

Trust The Connection is a combination of the books Connection and Trust, which were previously published.

Evan Harris, 21 and gay, works in a small funeral home owned by his uncle in his small hometown. Despite having been told he's useless for pretty much all of his life, he's good at his job and has ambitions, but also realizes that to continue the life he knows, he will have to stay in the closet. Until he's found out and kicked out of his home, with no place to go, that was his plan.

Evan makes a call to Russ (from the Equals series) in Atlanta, and Russ doesn't hesitate to help Evan. He and his partner Stephen move Evan into their home as a stop-gap, while Evan quickly works to find himself a job and a place to live. He's shy and introverted, and has little interest in one-night stands; he'd rather find someone for a relationship.


Jeremy Lewis has at 36 lived for many years as a recluse; an accident when he was much younger that left him scarred and with some physical limitations has turned him into someone who hides himself away, not wanting to see pity in people's eyes, and someone who thinks he's not worthy of love anymore. He's also Stephen's ex. Their relationship didn't end well, due to some intentional miscommunication on the part of Jeremy's parents, and they didn't get the closure they deserved.

Evan and Jeremy meet at around 1/4 into the book. Both men are broken in their own way and have both established their own way of dealing with things life has thrown at them, even if those ways don't exactly match up. Where Evan hasn't lost hope, and stands up for what he believes, Jeremy seems stuck in the past and has a rather off-putting woe-is-me attitude for some time. It takes him getting a strong wake-up call to finally rejoin the land of the living, so to speak. At first, theirs is a dance of hesitation, as neither can believe the other would be interested - it would have been comical, if it hadn't been so sad to watch their battered self-esteem prevent them from giving in to their mutual attraction.

This is a rather long book and might benefit from tightening the narrative a bit more to remove some of the more minute details, but the author did a fine job keeping me interested and making the story flow really well. The two main characters begin dating and slowly trusting each other, even if Jeremy thinks for a while that he has nothing to offer the much younger Evan. There are many emotional scenes throughout the book, and the author really drew me in - making me care about the characters and cheering them on. Love is not the magical cure-all, and the relationship was not an easy one - it couldn't be, not with their combined baggage - but Evan and Jeremy communicated honestly, discussed their hopes and dreams, their wants and needs, their personal hang-ups, and built a strong foundation for lasting love. They also had a small group of friends who supported them and became their family.

With crisp, realistic dialogue, and a mostly tight narrative, the book is told in dual 3rd person POV, which worked for me, as both Evan and Jeremy have a distinctive voice - there was never any question as to who was telling any given part of the story. The characters were complex, flawed, and relatable. The intimate scenes were well done and not superfluous or gratuitous - something I always appreciate in a romance novel.

Very enjoyable, but not something you can read quickly, so take your time with this one.