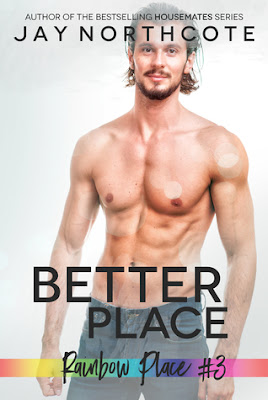 Like the other books in this series, Better Place can be read as a standalone but, in my opinion, will bring more enjoyment if read as part of a whole.

The series revolves around a cafe owned by Seb (MC from book 1), and all the characters interact and are at least tangentially involved in each other's stories.

Dylan has a crush on an "older" (I use this term loosely since Joe is 42) guy who spends hours at the cafe writing on his lap top. Joe is trying his hand at being an author and is working on his first fiction novel. Dylan and Joe engage in subtle flirting and form a tentative friendship. Dylan is interested in more than friendship, but Joe is taken.


And therein lies the rub. Joe's partner of ten years, Harry, takes Joe for granted, isn't supportive, and has a drinking problem. I wouldn't say the relationship is abusive (although Harry is moody and a complete twat) as much as dead.


Joe breaks up with Harry halfway through the story but lives with Harry (understandably, since they owe a house together) under the very end. I don't like stories where one of the MCs is with someone else. Granted, there is no cheating. The guys don't get together until after Joe leaves the relationship, but Dylan is the catalyst for the breakup.

Something about Joe and Dylan's romance didn't fully jive for me. The steam level is fairly subdued, and the ending is a tentative HFN. Because the stories in this series overlap, the epilogues are not particularly satisfying.

However, I liked how real this story was. Dylan had escaped from an abusive relationship and so could relate to Joe's plight. The slow burn was very appealing. I could relate both to Joe's fears and Dylan's reluctance to push the relationship too far too quickly.

I'm intrigued with Lady Gogo and am very much looking forward to that story!