Release Day Blitz: The Case of the Voracious Vintner by Tara Lain

The next installment to the
The Middlemark Mysteries Series
is now available!

The Case of the Voracious Vintner
(A Middlemark Mystery Series, Bk 2)
By Tara Lain 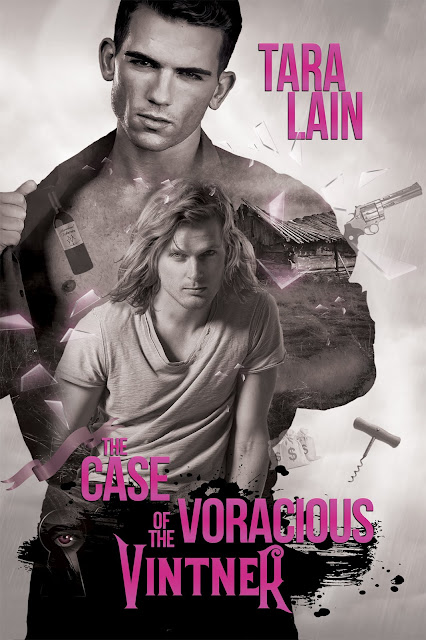 Where Bo Marchand comes from, gay men are just confirmed bachelors who never found the right girl. But now Bo’s a successful winemaker on the central coast of California, supporting his whole damned Georgia family, and all he really wants is the beautiful, slightly mysterious Jeremy Aames.

Jeremy’s vineyard is under threat from Ernest Ottersen, the voracious winemaker who seems to know all Jeremy’s blending secrets and manages to grab all his customers. Bo tries to help Jeremy and even provides a phony alibi for Jeremy when Ottersen turns up dead in Jeremy’s tasting room. But it’s clear Jeremy isn’t who he claims, and Bo must decide if it’s worth tossing over his established life for a man who doesn’t seem to trust anyone. When Jeremy gets kidnapped, some the conservative winemakers turn out to be kinky sex fiends, and the list of murderers keeps dwindling down to Jeremy. Bo has to choose between hopping on his white horse or climbing back in his peach-pie-lined closet.

“Shall we read the rest?”
Jeremy nodded, all that fair hair rippling, and Bo plunged into his next line just for the distraction. “Indeed, you come near me now, Hal, for we that take purses go by the moon and the seven stars, and not by Phoebus, he, that wand’ring knight so fair.” His heart tripped. Knight so fair. He groped for his wineglass, hit it awkwardly, and tipped it right over onto Jeremy’s arm. “Damn! I’m so sorry.”
Bo grabbed the glass and hurried around the bar for a rag of some kind. He found a roll of paper towels and dabbed madly at Jeremy’s soaked shirt, the wine creeping up the cotton fabric toward his shoulder. “That was so careless of me.”
“No problem, really. I always keep a shirt close at hand for just such accidents because they seem to happen several times a day. The red’s the worst.” He walked behind the counter near where Bo stood, opened a narrow closet, and pulled a white shirt off a hanger. Then, as Bo tried to keep his tongue in his mouth, Jeremy proceeded to strip off his wet garment and drop it in a hamper, also in the closet. He pulled another shirt up from it and laughed at the huge red stain on the front. “See what I mean?”
Dear blessed God. His comparing Jeremy to Brad Pitt washed back into Bo’s brain, this time the lean, hard body of Fight Club. How did a normal person get abs like that, below shoulders and arms like that? Whoa.
With no apparent hurry, Jeremy sidled to the bar sink, took some towels and wet them, and began to wipe the wine off his glistening golden skin. Bo would gladly have volunteered his tongue for the job. Jeremy held out a fresh wet towel to Bo. “Would you mind? The wine seems to have seeped up onto my back a bit.”
Catatonic. For a second he thought he’d embarrass himself by being unable to move, but he managed to pull it together and take the towel from Jeremy. Jeremy turned and presented a masterpiece of shoulders and triceps for Bo’s careful inspection. Bo’s dick pronounced Jeremy flawless. “You’re very fit.”
Jeremy glanced over his shoulder abruptly, and for an odd second, he looked—what? Worried? Guilty? Why?
“Uh, yes, I used to be into working out.” He turned his head, but his shoulders had tensed a little.
Taking a breath, Bo wiped the wet towel over Jeremy’s smooth skin on his shoulder and down the side of his back. His hand faltered more than once at the heat penetrating the wet paper and the overwhelming desire to drop the towel and just touch that vanilla crème texture. Thank God Jeremy was turned backward because Bo’s erection threatened to take over the tasting room like Godzilla in Tokyo.
Okay, he couldn’t resist, and probably Jeremy couldn’t tell. Bo let his fingers slip off the side of the paper and slide across Jeremy’s back. Not perfectly smooth as it looked. There were little variations in texture here and there, tiny moles or freckles, like a living, breathing human. Oh dear God, that was more disturbing than perfection. The need to lean in and rest his cheek against all that strength flamed through him.
Suddenly Jeremy made a funny, snuffly sound, as if he was stifling a moan and a sigh at the same time.
Bo froze. Fuckity frogs and fishes! Swiftly and efficiently, he wiped the last dregs of wine from Jeremy’s flesh, dropped the towel on the bar, and walked out toward the opposite wall, taking deep breaths so there was no chance of Jeremy spying his boner. 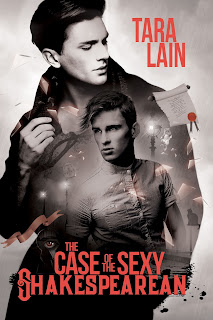 The Case of the Sexy Shakespearean
Bk 1