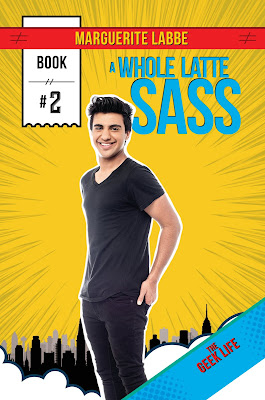 It’s no secret cosplayer Felipe Suero is looking for his happily ever after—in his love life as well as his career. He’s getting his degree so he can quit his miserable job and start his own costume business. Now he just needs to land the sexiest silver fox to ever attend a con.

Trask Briscoe’s life revolves around staying clean and sober, running the Magick Den, and attending local cons. His rules haven’t left much room for romance. But he can’t deny Felipe has caught his complete attention. He’s just not sure what he can offer a man so full of joy and sass.

When Trask finally accepts Felipe’s offer for a cup of coffee, he soon finds himself on a second date and a third. Between cosplay projects and roleplaying games, they discover a deeper connection than either of them expected. And Trask realizes that sometimes rules are made to be broken.

Now Felipe just has to convince his family—and Trask—that Trask has more love to offer than he ever dreamed.

Growing up a Child of Immigrants
Hello everyone. Thank you for stopping by and checking out my new release A Whole Latte Sass. Today I thought I’d talk about something a little different and step away from the geekiness since there’s plenty of that in the books. One of the main characters, Felipe Suero was born American like his dad, but his mama was born in the Philippines. His grandparents on his dad’s side were from Colombia and both cultures have a big influence on his life. Growing up he was cared for by both his Lola and Abuela. He heard Tagalog and Spanish along with English and soaked it all in.
Though my mom was born American, my grandparents immigrated not long before she was born. She grew up with French as her first language and didn’t start speaking English until she started school. She used to go with my grandfather to Montgomery Wards in the winter when work was slow to help him translate the contract that would allow him to buy needed goods for the family until he could start logging again.
Like Felipe’s family, many of my mother’s aunts (or ma tantes as we always called them) came to the U.S. with Grandmaman, several stayed back. Visiting them was an experience as Felipe can attest to because he spent many summers in Manila or Bogota. His Lolo traded finishing in the Philippines to fishing in the Chesapeake Bay area and he taught himself English by reading comic book. My Grandmaman taught herself through newspapers and watching baseball and she passed down a love of the game to us all.
Felipe’s family gave him a love of traditional foods whether it was patilaw, paella, or sancocho. My Grandmaman gave me tourtieres and other poor man’s food like ragout that she insisted never should be served to company, but my friends loved it anyway.
Though I wasn’t as immersed in it as Felipe, my dad was in the military and we moved around often, still it was an interesting way to grow up split between two cultures. Though Felipe has three. There is an incredible richness and sense of heritage. I love having family in other countries that I can visit though I miss having them close by. I feel the weight of passing down traditions that seem to get diluted with each generation. I am the holder of my family’s recipes and at the moment, none of the kids seem interested in learning. I’m hoping that it changes.
I don’t have Felipe’s multilingualism and I wish I did, but like him, I know all the curse words.
Please, tell me about your favorite tradition or recipe passed down from your family, something that makes you go ‘this is home.’ And in the meantime, enjoy this excerpt about Felipe and his family.

Nothing I can’t change around if I get to see you. I can study at your place as well as here. Man, don’t ever play Boggle with my family. I’m getting my ass kicked in three languages.
“Good girl, Sophie,” Trask said as the puppy dropped her squeaky toy at his feet. He enjoyed a good game of Boggle, and he might be able to come up with a few words in Spanish, but he wouldn’t be able to compete with a trilingual family.
Good luck. I’m going to be in Pittsburgh, buying up some stock. Was wondering if you wanted to hit the road with me.
A few months ago, Trask would’ve gone alone and not even thought about inviting anyone. Now it seemed a little lonely. He’d have to find a hotel that accepted dogs, because there was no way he was leaving his girl behind. She was just a puppy, and bonding was important. He reached down and snagged the toy. “One more round and then we’ll go for a walk. We shouldn’t be holed up all night.”
He left Sophie waiting with impatience as his phone dinged.
You realize that is the ultimate test of our relationship?

Trask couldn’t quite figure out that line of reasoning, but Felipe was often two steps ahead or sideways from him. How so?
Trask knelt on the side of the bed and hid the squeaky toy between his knees. That ought to give her a moment’s pause. “Come on, Sophie. Find it.”
A red-and-gold blur came toward him with a happy bark, and at eye level, he realized how much she’d grown. She dove right into her search and soon was pawing at him. Trask shifted with a laugh, the toy squeezed, letting out a plaintive squeak, and Sophie went nuts, barking at his knees and knocking him over. The toy forgotten, she licked him as Trask laughingly fended her off. They needed a new place. One where she could bark and not piss off his neighbors. Where she could run around outside, and if Trask had visitors he’d have room for them to hang out. He’d start looking once the holidays were over.
“Wanna go for a walk?” Trask asked, picking up his phone to see Felipe’s response as Sophie carried her prize off to her doggie bed.
You will be stuck with me in a car for hours. Lesser men have been known to be struck with terror at such a thought.
Trask had to smile at that. Felipe’s chatter was a part of his charm. Trask liked to hear people talk. He ran a comic book and game shop. People came in and nattered at him for hours. He considered it vastly different from socializing. That required putting out as much as taking in. As long as Felipe wasn’t bothered by Trask’s quiet, Trask would enjoy the pleasant flow of his observations.