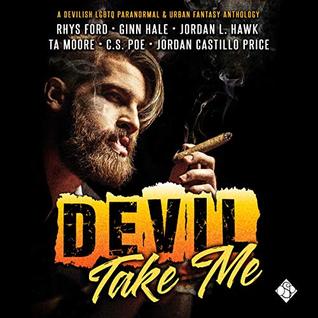 
Temptation lurks around every corner in worlds sometimes dark, sometimes lurid. Giving in is both dangerous and satisfying, though never in the ways one expects. While these enticements offer a vast range of benefits and boons, the cost is a soul and the devil expects his due. Sometimes suave and charming or calculating and cruel, these devils have schemes and desires of their own. They can be creatures to run away from… or toward.

Join the most unique and celebrated authors of LGBT urban fantasy and paranormal fiction for a fast-paced and unpredictable ride, from a city on the other side of reality, to a world suspended in dusk, to a twisted version of the 1960s and 70s.

Meet devils in top hats and waistcoats, a defrocked motorcycle-riding priest, and a genderfluid antihero—among many more. Full of humor, romance, horror, action, intrigue, and magic, these stories have one common element….

They’re one hell of a good time.

So in the interest of full disclosure...

I took a pass on the book because no, just no. I was positive this would never work for me and then came the audio and I looked again...I say Rhys Ford, Jordan L. Hawk, C.S. Poe, Ginn Hale, T.A. Moore and Jordan Castillo Price and the icing on the cake narrated by Greg Tremblay and still I pondered, I waffled, I procrastinated...I told myself I didn't have the time and I kept looking at those names and my brain kept saying...but, but, but...

and finally I caved and said 'yes please.' and what did I learn after nearly 18 hours...well, I learned that what happens when you make a deal with the devil isn't nearly as interesting as what happens when the devil makes a deal with you, I learned that faith can be bent and reshaped but that doesn't mean it's broken, I learned that sometimes believing in someone else helps you to believe in yourself, that things not being what  you think they are doesn't mean they're not what you need...but most of all I was reminded that one should never say never...as in I never read/listen to stories about things that go bump in the night, that a good story is a good story regardless of the subject and that well in the words of 'George Michaels'...Ya gotta' have faith...

I actually finished listening to this audio book a couple of days ago and was left with the question of how to review this. It's an anthology which means it's a collection of stories by different authors, unlike the last anthology that I read which was a collection of stories about the same characters by the same author much easier to deal with but after much consideration what I've decided on is that I'm going to address this in a general sense.


Let's start with the authors. I admit this was what caught my attention from the very beginning I've read at least one book (mostly more) by each of these authors and they have been some of my favorites and in this anthology we get to sample each of these authors as they offer up a tale of demons and things that go bump in the night in worlds that are unlike anything that we know as..

Jordan L. Hawk...gives us 'Infernal Affairs' a story of a demon who finds himself at the crossroads.

T.A. Moore...gives us 'Collared' about a man of god who loses his life and his faith but not his sheer determination to do what needs to be done.

Ginn Hale...gives us 'The Counterfeit Viscount' this ones not about deals or bargins with a demon or the devil. It's about the power of faith.

C.S. Poe...gives us '11:59' and we see what happens when a person strikes a deal with the devil only to discover that they've given up more than just their dreams only to become the one person that can solve the devils problem.

Rhys Ford....takes us back to 'Wonderland City' and trust me this is not the Wonderland of our childhoods and if you think Alice had an adventure in Wonderland the citizens there would tell you it was more akin to a nightmare.

Jordan Castillo Price...and finally in 'Dark Favors' we are given a story about trading in favors in which we discover that payback really can be a bitch and every contract has a loophole....you just have to find it.

These stories all have some things in common first off they were surprisingly good...I mean seriously I'm looking forward to revisiting these stories all of them.  But seriously for as dark as they are and yes these are all a walk on the dark side. Every one of them dealt with love, trust and faith.

Originally I was going to rate each story on an individual basis but truthfully when I got listening to them I realized that by rating them individually I'd be saying that I like some better than others and while there were different reasons that I liked each of these stories and I will be the first to admit while I was able to resist all of these authors collectively because I honestly didn't think this was going to be my cuppa' once it became an audio book and I discovered that it was narrated by one of my absolute favorite narrators...the awesome Mr. Greg Tremblay I decided that I was going to take a chance on this one and I'm so glad that I did. I can't say this would have been a 5 star read for me but as an audio book it was one of those books where I frequently found myself stopping what I was doing so I could just listen to what was coming next.

While I found these stories to be dark and slightly scary what they weren't were stories that 'scared me' and kept me awake at night...yes, I'm one of those people who are rather easily scared but I do still enjoy stories that delve into the dark side of human nature whether it's real or purely fiction...the darker side of things fascinates me...on paper...in the real world I like my sunshine and rainbows thank you very much.

An audio book of 'Devil Take Me' was graciously provided by the publisher in exchange for an honest review.

Buylinks are provided as a courtesy and don not constitute an endorsement of or affiliation with this book, author or booksellers listed.