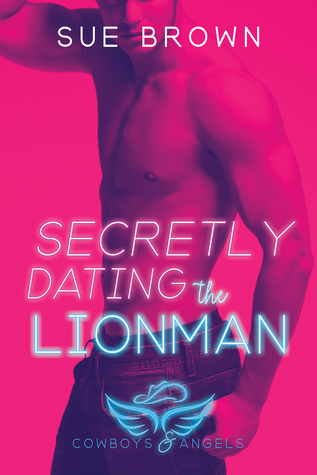 Can a man burdened with family drama find his way into the arms of a happy-go-lucky stripper called Lionman?

Cris likes a drink at the Cowboys and Angels bar after his shift at the strip club—until one night when a trashed young guy named Mikey tries to kiss him. He’s not Cris’s type, but Cris is good enough to see the kid home safely. There he meets Mikey’s handsome older brother, Bennett, and there’s an immediate spark between them.

But Bennett might not be in a position to start a relationship, let alone with the carefree Cris. He’s trying desperately to hold his family together, with a younger brother who’s running off the rails and hostile parents who will never accept not just one, but two gay sons.

When Cris is unexpectedly fired and Bennett’s family drama escalates, they turn to each other for support. But can a shoulder to lean on develop into something much closer, something they both deserve?

I was really looking forward to this book, and I enjoyed the story as such - Cris, the Lionman, was a side character in the first book, and I was hoping he'd get his own story. Bennett, the other MC, is the brother of Mikey (resident lush at Cowboys and Angels bar) and so deep in the closet he's almost in Narnia.

I won't rehash the blurb here, but suffice it to say that Mikey is confused as hell, and Bennett is trying to prevent his little brother from making a huge mistake - though what exactly that mistake is probably isn't clear to Bennett.

Mikey laying a wet one on Cris at the bar while drunk as a skunk, and Cris taking him home to be a good Samaritan apparently doesn't endear Cris to Bennett, and I disliked Bennett intensely for that bullshit.

Then a bit later one, again in the middle of a self-love scene, there's talk about a "pear-shaped slit". I'm sorry, what? Pear-shaped? I've seen a few slits in my life, and not a single one of them could be described as pear-shaped. Is that a thing?


And then the editor clearly took a vacation, because there's no other way that a one story house ended up having an upstairs. I can believe it having a basement, but a one story house has ONE floor. Not a downstairs and an upstairs. That's TWO floors. Two stories. Unless this is a British thing (which is possible), but then this should be Americanized for a story set in the US.

After that, I simply didn't care to continue highlighting the issues I found, just kept reading the story so I could finish. The first meeting with Bennett's parents goes as expected, though this leads to Bennett taking a stand (finally), and things start to get better for him and Cris. I liked seeing Dan and Gideon again - I like this couple - and I appreciated that Cris had a backbone, even if it cost him. There's a good chunk of easy camaraderie inside, with teasing and sarcastic comments, and I really enjoyed that.

The story itself was good, and the book would have gotten 4 stars easily if there hadn't been so many errors that pulled me right out of the reading flow.

I am looking forward to the next book in this series which will hopefully be about Mikey and Ramon. Hopefully, the editor won't be asleep for that one.


**I received a free copy of this book from its publisher. A positive review was not promised in return. **