ARC Review: Rough Terrain (Out of Uniform 7) by Annabeth Albert 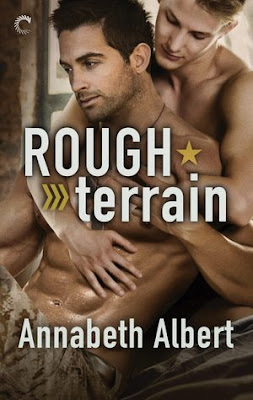 Canaan works at a smoothie shop on a military base, but he has life goals. He's taking care of his grandfather and studying to be a nurse. Canaan used to be the drummer for a band that made it big (or at least bigger) after he left.

But Canaan doesn't regret his decision, nor does he regret ogling the navy SEALs, or one SEAL in particular, who come into the smoothie shop to load up on protein.

Renzo (Rooster to his navy friends) enjoys flirting with Canaan more than he wants to admit. It's not that Renzo isn't out. His colleagues and family know he's bi, but his time in San Diego may be limited and relationships require time, something that's in short supply for a dedicated SEAL.

When Canaan offers trouble, Renzo can't say no, and so begins a relationship built on adventure and kisses. Renzo goes camping with Canaan and Canaan's former band mates (including Canaan's douchey ex), posing as Canaan's boyfriend.

When the men get trapped on a trail during a deluge, their flirting moves to another level. Canaan credits Renzo with saving his life and doesn't want to let Renzo go.

Renzo and Canaan's relationship is strong from the start. Canaan is big on talking things out and realizes quickly that Renzo is a perfectionist, especially when it comes to sex.

Renzo has a rather, uh, BIG problem. But Canaan assures him he can take it (really, it's no hardship!) and there are other ways to have fun. Renzo and Canaan burn up the sheets. This book has some of the hottest frotting scenes I've ever read. I loved all the sexy in this story!

There's also a strong sense of family. Both men want to do right by the people who raised them. Canaan adores his grandpa, who takes a liking to Renzo, especially when Renzo proves he can cook.

Renzo's family, especially his mom, puts him on a pedestal; the hero worship makes Renzo feel like he'll never be enough. His brother needs constant care, and Renzo still feels guilty for an accident that wasn't his fault.

Rough Terrain is well paced and tender, with overtones of hurt/comfort. There is some mild relationship angst toward the end, but it's resolved without undue drama.

I really loved this couple and was thrilled with their wonderful HEA. These two will fly high and land together. Always.

P.S. We've met Canaan in a previous Out of Uniform story, but it took me nearly two-thirds of the book to have this epiphany.