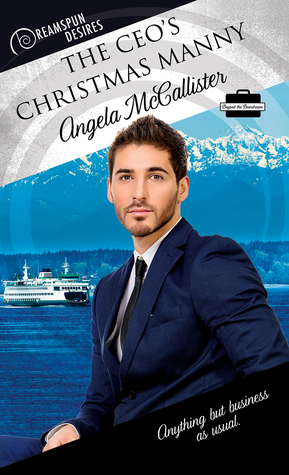 Anything but business as usual.

Billionaire CEO Nic Price lives for his job. With sales down and grumbling from the board of directors—including Nic’s permanently dissatisfied father—the last thing Nic needs is distraction from the new manny, whose freewheeling approach to childcare is outlandish... and who makes Nic feel things he’s never allowed himself to feel.

Ex-teacher Sasha Lindsey is all about fun—that’s the reason people love him, so he has to be. After a bad break-up leaves him jobless and homeless, the live-in manny job with Mr. Price seems like a windfall. But his chemistry with Nic is off the charts, and he can’t afford another workplace romance disaster.

Can Nic leave his dominance in the bedroom and open his heart to the best thing that’s ever happened to him? Or will Sasha’s leap of faith backfire and ruin his chances at the family happily ever after he’s always dreamed of?

In this installment of the Dreamspun Desires series, we're introduced to Sasha Lindsey, who used to be a teacher, but is after a bad break-up currently without a job and home and in desperate need of both, and Nic Price, uber-rich CEO of his family's company, single, and struggling to meet the expectations of his father who can't to ever seem happy with anything Nic does.

Sasha is used to grin and bear it, realizing from an early age that people love him if he smiles and is fun, because his parents' didn't know how to deal with problems and left most of their issues to Sasha to fix. This instilled in Sasha a desire to please people, to agree to do things that he may not want to do, as well as the belief that he's only worthy of love as long as he doesn't rock the boat or comes across as needy.

Nic is caring for his sister's children, after she and her husband died four years ago, but he's doing it badly. Never having been given time to grieve, overworked and under way too much pressure, he's not been able to form a real bond with the two kids that live in his home. And due to that, the kids are, while not physically neglected, struggling emotionally, which manifests itself in skipping school, and driving every nanny they've had away.

When Sasha is hired as the live-in manny, it doesn't take him long to see right through Lucy (16) and Ben (12) - both kids are in desperate need of love and real attention, and that their antics are just a cry for help. As he begins working with them, showering them with attention, including them in meal prep and other things, the two grieving kids slowly start to live again.


Nic takes one look at the manny and immediately has the hots for the younger man, but his strict rule of never getting involved with employees prevents him from making any moves. Sasha too falls hard and fast in lust, and the UST just drips off the pages.

Both Nic and Sasha, despite their disparity in wealth, were very similar in character. Both were raised by parents who didn't deserve that moniker, being all about their own needs and desires, not caring what that did to their children. Nic's parents still being judgmental and never satisfied with his work performance only exacerbated that. Where Sasha's parents were emotionally absent and relied on Sasha to fix the problems they caused themselves, Nic's were also physically absent, shipping him off to boarding school as soon as they could, without any thought to his emotional needs.

Sasha starts to peel back layer after layer of Nic's rigid self-control and shows him how to interact and communicate with his niece and nephew, how to see them clearly, how to build a new family with them. Nic spends more time with the kids and realizes that he enjoys being around them. He learns that it's okay to have fun.

Obviously, there's bound to be some drama, and it takes a bit for Nic to find his backbone and stand up to his asshole father, which almost derails the relationship with Sasha, and with the kids.

But of course this is a romance, so there's quite the satisfying grand gesture and the Happily Ever After our two MCs so richly deserve.

I enjoyed reading this. While it start a little slow, once Nic and Sasha get closer, the story flows by quickly. I knew that the smooth sailing in the middle of this book wasn't going to last, and that there would be a point where things will blow up.

This was a sweet story, with two likable MCs, two great kids, and parents who should be kicked to the curb, and I definitely recommend you giving this a try.