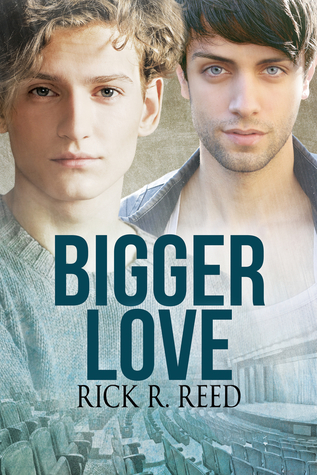 This is first and foremost a YA novel. I don't read those a lot anymore, but since this was the follow-up to Big Love, and because this was going to be all about Truman finding his way around the bigots of his small-town, I wanted to read it.

I adored Truman in Big Love, and I adored him and cheered him on in Bigger Love. Truman is brave. Truman isn't willing to let small-minded people stand in his way, no matter how much their words hurt. Truman is in love for the first time, and Truman will be damned if he's going to let bigots dictate what he can and cannot do, including what he wears and how he expresses his gender.

Truman's mother, his fiercest ally and friend, has been dating a man named George, whose son Mike has caught Truman's eye. Mike is much more masculine than Truman and can totally pass as straight, a fact that is part of what the author tried to convey with this book, IMHO - that what we perceive to be true isn't necessarily correct. So the masculine guy isn't straight, and the homophobic bigot isn't as without sin as he'd like you to believe, and the popular girl's life isn't as easy as you might think, and maybe, just maybe, Truman can play a female role in "Harvey" for his school's theater group.

With his father not gay-friendly, Mike struggles with hiding in the closet as his and Truman's connection grows. Or at least, we're told it grows. I for one didn't actually quite see the sparks flying between them. The romance lacked in chemistry, and a lot of the emotions I expected felt more telling than showing. Mike's actions in some instances also felt a lot like internalized homophobia, especially when it came to Truman's in your face, I'm queer, so deal with it kind of persona. And I didn't like Mike for how his actions hurt Truman. Because I'm super biased, and I love Truman. I think he deserved better.

Of course, there's drama because small-minded small-town bigots just can't keep silent in the face of Truman's fabulosity, but a grand gesture that was both sweet and funny is much louder than the shouting of the homophobes. And Truman's mama, God bless her, is fully and completely in his corner all the way.

The book ends with a HFN, though of course this being teenage love, we don't quite know what the future holds for Truman and Mike. It might be nice to revisit with them a few years down the road. Not sure if that's possible, but it would be nice nonetheless.

I still think Truman deserved better than Mike. Hell yeah, I'm biased. Sue me. (actually, please don't sue me - this is just my opinion, and it's totally cool if you don't agree. really.)