I’m here on My Fiction Nook today to give you a sneak peek at my next release—the start of a new series in the Camp H.O.W.L. universe. Readers will see some familiar faces from the Camp H.O.W.L. series in Stealing His Heart, which is the first book in the Connoll Pack series.
We got a glimpse into the world outside Camp H.O.W.L.’s cozy confines in Hiding in Plain Sight, and the Connoll Pack series picks up where that book left off. All three books in that series will be set in New York, starting with Danny, a werewolf who runs a charity that helps supernatural kids in the foster system get the resources they need. Danny is part of the Connoll Pack (the same Pack Tate, Adrian, Harris, and Jackson joined after they left Camp H.O.W.L.), but he’s a bit estranged from Pack dynamics because his family never embraced their werewolf heritage.
That might be part of the reason why Danny is so open to a relationship with a shifter who isn’t a wolf. Sparks fly and there is instant attraction when he meets the hot detective who lives across the street, but he can’t figure out what type of shifter Max is. Below an excerpt from Max and Danny’s first meeting. 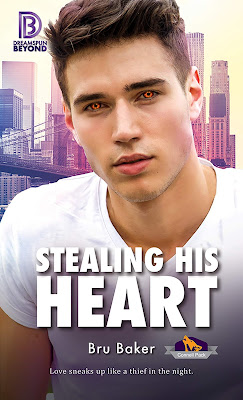 Love sneaks in like a thief in the night.

Danny’s parents raised him to believe his wolf was a curse. He’s part of the wealthy and powerful Connoll Pack, but only nominally. He abandoned that world to volunteer with supernatural kids, and he isn’t looking for a mate….

Max is a shifter who is also a detective. He’s working a case that could make or break his career. Danny’s caught up in the case he’s on, and he’s also irresistible. They’re a bad match—Max, an Alpha having trouble with his new powers and Danny, who trusts Alphas as far as he could throw one. But they can’t get enough of each other, and they might bond before they even see it coming.

They could be amazing together, but they have to get past a few obstacles—especially since someone close to Danny might be involved in the thefts Max is investigating.


It had been forty minutes by the time an unmarked police car with lights on the dash pulled up. He wouldn’t have noticed it if he wasn’t watching for it. It slid into a space across the street, and Danny shot up, waving his hand frantically so the officers could see him. Only one guy got out, and he wasn’t wearing a uniform. When he turned and started walking down the street, Danny streaked after him, using more speed than was cautious. He dodged a Prius. Its driver slammed on the brakes and honked, and the cop turned around. He stopped and watched Danny run, and Danny didn’t slow down until he noticed the calculated way the guy was looking at him.
This was why he rarely used his Were strength or senses. He was so bad at hiding it.
“You got a problem, buddy?” the cop asked when Danny skidded to a stop in front of him. “Pretty dangerous move you just pulled there.”
When the cop squinted at him, Danny remembered a human would be out of breath after a stunt like that. He heaved his chest as best he could, but the cop just rolled his eyes and took him by the arm, pulling him into an alley between buildings.
“Look, you can cut it out. I can smell you’re a wolf. What the hell are you trying to pull?”

Danny’s fake hyperventilation turned into an actual gasp, which triggered a coughing fit. He hunched over, and the cop smacked him on the back a few times, hard enough to bruise a human.
“My apartment was robbed, but you were heading the wrong way. I wanted to catch you before I had to wait another forty minutes for someone else to show up.”
The guy gave him a long look. “You called dispatch?”
“They said they were sending someone right out.”
The cop laughed. “You could be waiting a lot longer.”
Danny couldn’t help the way his lower lip trembled. He swallowed hard, but he knew the cop had scented his tears. The guy’s nostrils flared, and his face softened.
“I’m coming off shift. I’ll come over and take a report. You live across the street?” he nodded toward Danny’s building. Mr. Rodriguez had come out, probably drawn by the screech of brakes and honking. He had his arms crossed, and he was looking right at Danny.
“Let me call it in and tell dispatch I’m taking it,” the guy said.
He walked back to the car, got in, and fiddled with the radio. Danny tuned it out, not wanting to hear how he might recount the story. It had been stupid to run blindly across the street like that. He’d just been so worried when the guy went the wrong way.
After he finished with the radio, the guy got out and popped his trunk. His movements were sure and economical as he opened a safe and took out a scary looking black gun, which he strapped to his waist.
“What unit?” he asked as he slammed the trunk shut.
Danny gave him directions to his apartment, and the two of them crossed the street at a much more sedate pace than Danny’s first crossing. Mr. Rodriguez had disappeared by the time they reached the steps, which was the first thing that had gone Danny’s way all afternoon.
“You stay out here while I clear the place. I’m sure the burglar’s long gone, but it doesn’t hurt to be safe.”
Danny couldn’t help but watch as the man ran up the stairs. He had a superb ass. All of him was pretty superb, actually. Now that his panic was receding, Danny could actually appreciate the way the officer’s slacks and button-down couldn’t quite hide how nicely built he was. His face was attractive too.
And he was supernatural. He’d sniffed out that Danny was a werewolf immediately, but Danny couldn’t place the officer’s scent. He definitely wasn’t a werewolf, and he wasn’t fae either. He smelled earthy, like a shifter, but not anything Danny could pin down.
He’d had a gun. Did that mean he shifted into something that didn’t have claws? Though as a cop he wouldn’t be able to use them, so that’s probably why he had the gun.
He heard the cop thundering down the stairs a few flights before he saw him, and he was ready when the man burst out of the door. He had stowed his gun, and he didn’t look nervous or upset. He motioned Danny up the stairs.
Danny followed the detective inside.
“No one was in your apartment, but it doesn’t hurt to make sure,” he told Danny over his shoulder. “You had a pretty flimsy lock on that door. It wouldn’t have taken much to break it.”
The detective had moved the door aside instead of walking over it like Danny had. It was in pieces, and he had no idea what he was going to do about it. His super was useless, so Danny would have to figure out how to salvage the door until he could get someone to come by and put up a new one. God only knew how much that was going to cost him.
“It doesn’t look like they tossed the place. Do you know what’s missing?”
The lump in Danny’s throat grew. “A lot. I’m the director of the Janus Foundation, and I was storing things for the foundation here. We’d raised enough money to give each of the kids we work with a laptop or an iPad for the start of school.” 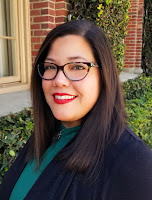