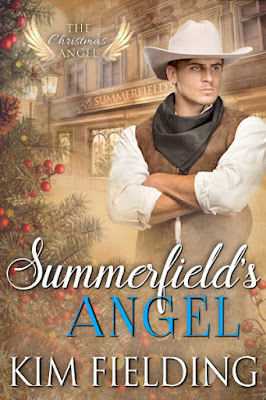 
After the hard winter of 1888 ended Alby Boyle’s work as a Nebraska ranch hand, he returned to New York City in search of his long-lost family. His mother and brothers are nowhere to be found, however, and after Alby’s years of absence, Five Corners no longer feels like home. His prospects seem as dim as the nighttime alleys.

When Alby pauses to admire an angel ornament in a department store window’s Christmas display, he meets Xeno Varnham-Summerfield. Wealthy, handsome, and enthusiastic, Xeno brings Alby some temporary cheer. But for Alby to achieve his dreams of love and a real home, well, that may take a bit of holiday magic.

Alby works hard and longs for simple things: a meal in his belly, some warmth in his bones, some decent rest for his body and mind. He arrives in New York City just before Christmas 1888 in the hopes of finding the family he was forced to leave behind when he was shipped off to Nebraska as a young teen.

His first day in the city, Alby, who knows ranches and horses and cattle, is drawn to a department store window where he finds a beautiful angel with shining red hair. He’s so focused on the angel, he’s nearly trampled in the street by a trolley. Fortunately, a handsome young man is there to pull him back.

Xeno is nothing like Alby: he’s wealthy, articulate, and well traveled. He’s also utterly charming and sees Alby as an equal, despite the obvious difference in social class. Xeno and Alby run into each other time and again, as if drawn together by a thread of fate.

I want to burrow into you—into your mind as well as your body. I want to know everything about you, everything you’ve done and all you’ve hoped for. I want to know what fresh strawberries taste like on your tongue, what the color green looks like through your eyes. I want to see you laugh, Alby.


This is a poignant, magical story about two men from completely different worlds who keep crossing paths. Xeno vows to help Alby find his family, and Alby, prompted by a vision, gallops madly through the streets of New York to save Xeno’s life.


Alby is the narrator of the story, but Xeno feels just as real. He becomes an idealized version of himself because we see him as Alby sees him.

The men share lunch, kisses, and stolen moments of passion; in the end, they save each other, with a little help from the red-headed angel.

Fielding is a brilliant author. The story feels true to the time and place, and 19th century New York comes alive on page. There are the street urchins, ruffians, and men chasing dreams while staying at the YMCA.

I loved every moment I spent with Alby and Xeno. There is so much tenderness in this story; a feeling of nostalgia and hope permeates every page. The epilogue made me weep, not because it was sad, but because it was perfect.

”Now that you’ve unwrapped your gift, does it meet your expectations?”

Kim Fielding is the bestselling author of numerous m/m romance novels, novellas, and short stories. Like Kim herself, her work is eclectic, spanning genres such as contemporary, fantasy, paranormal, and historical. Her stories are set in alternate worlds, in 15th century Bosnia, in modern-day Oregon. Her heroes are hipster architect werewolves, housekeepers, maimed giants, and conflicted graduate students. They’re usually flawed, they often encounter terrible obstacles, but they always find love.
Kim’s novel Brute was the 2013 Rainbow Award Winner for Best Gay Fantasy and tied for fourth place for Best Gay Novel.