Hey readers! I’m JS Harker, and today is release for my book Tit For Tat. You may have seen the cover reveal back at the end of September here at My Fiction Nook. Well, September has turned into December. It’s nearly the end of the year, which is scary and exciting. This year’s been a good one for me as I’ve had the joy of publishing two books with Dreamspun Beyond.

Tit For Tat was a fun story to write. I live in an area where we had really late snows this year, so that helped with motivation for the story. Seemed like every time I looked out my window, it was frozen hills everywhere. Flynn would love that kind of place because it’s a lot like home for him. He’s adventurous, but even the most excited world traveler can miss where they come from. In Tit For Tat he falls Derek, a human boy who has never really left home before. Derek’s pretty sure life is going to be super boring. Graduate college, get job. Plan from there. Flynn definitely upsets that plan.

At the moment, I’m working on a few other stories. Two are follow-ups to Tit For Tat. Each book features its own couple and season. I’m focusing on a Summer fairy story about Jared, a man who works too hard, and Brady, a Summer fairy who’d rather play games then pay attention to responsibilities. The other one is a Halloween-themed idea where a human boy gets lost inside a smaller fairy realm devoted to fall and the spookiest night of the year. Other than that, I have a project that I’m working on for Dreamspinner about an FBI agent whose investigation gets interrupted by an agent of a secret federal bureau that explores the paranormal. 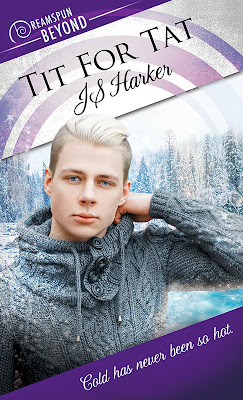 Cold has never been so hot.

College sophomore Derek is busy working over his holiday break—but his shifts at the toy store are no hardship if they mean more opportunity to dream about the sexy new guy working as an elf in Santa’s Workshop. When his mother gifts him a bag of cookies, Derek regifts them to Flynn as an excuse to get to know him. Flynn has presents to offer as well, and soon they’re dating, with Derek finding out his comfort zone is bigger than he imagined.

But Flynn is hiding a secret—he’s really a winter fairy whose magic is bound to the season. He can’t stay in the mortal realm, and Derek doesn’t want to lose contact with his family. Can they find a way to hold on to each other when the snow and sugar plums melt away?

Winter had settled in a couple weeks ago, but fresh snow from the other night returned the shine of the season despite the gray skies. A few dead leaves skittered across the frozen landscape. Normally Derek would brush this off as a dull winter day, but Flynn was beside him. With a daring impulse, Derek took Flynn’s hand. He thought Flynn might pull away, but he interlocked their fingers instead.
That was all Derek had ever wanted, really. To go on a date and hold hands with a guy he liked.
Flynn kept his promise and paid for their skate rental at the small pavilion near the lagoon. They made their way to a park bench on the edge of the ice. There were enough people to make Derek self-conscious about his lack of skating skills. He’d taken a few lessons as a kid, but since he never gained the dexterity for figure skating or the drive for hockey, he’d given it up.
Maybe he should have taken a few more lessons. But really, other than Flynn, he’d never pursued anything.

The realization was as stark as the cold wind. High school was about surviving tests and making it through the next social thing without being totally awkward. It seemed everyone in high school knew he was gay way before he did, and when he finally came out, no one was surprised. But there weren’t exactly a lot of other guys to date either. So the awkwardness continued until college, where it became worse in some ways because he didn’t have any experience.
Flynn finished lacing his skates first, and he stepped out onto the ice as if it were as natural as taking a breath. He glided. The wind tousled his hair. He was jaw- droppingly beautiful in motion. Derek was pretty sure there were others watching him, but he couldn’t take his eyes off Flynn to check.
As if the universe needed to balance Flynn’s astonishing grace, Derek struggled to his feet and onto the ice. He crashed to his knees, attempted to get up, and wound up on his ass.
Flynn came to a stop inches away in a perfect movement. He held out his hand to Derek.
“I’ll pull you down,” Derek said. “I’m too heavy.”
“Then we’ll have a few interesting bruises to explain.” Flynn waggled his fingers.
Derek accepted his help, and they managed to get him on his feet without falling over. He lost his balance almost as soon as he was up. His feet went wide all on their own, and he leaned too far forward. He’d been okay at this the last time he tried this.
But then he’d been eight. Eleven years made a hell of a difference.
Flynn offered his hand again.
“I don’t want to hold you back,” Derek said. “We agreed this is a date, yes?” “Yeah.” “Then how could you possibly hold me back when the whole point is to spend time together?”
Where had Flynn been all his life?

JS Harker loves stories. She was one of those kids who always had a book in her hands and spent many hours adventuring with her siblings. These days she wanders into her imaginary worlds and conjures up tales of magic, passion, and happily-ever-afters. She currently lives in the part of the Midwest that makes Tatooine look interesting by comparison (not that she’s ever obsessively thought about becoming a Jedi or anything).