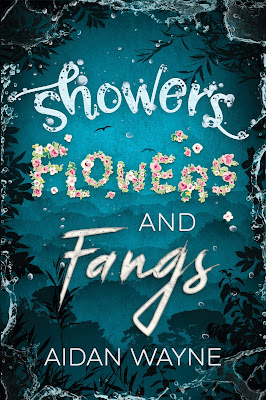 Darren is your average half-human, half-fae trans teenager, busy figuring out his powers and puberty while trying to survive finals. When Vlad, a newly turned vampire, moves in with the witch down the street, he and Darren get off on the wrong foot. Darren is always one to give somebody a second chance, though, and as they become friends, he realizes Vlad is just lonely and struggling with his new powers.

That’s something Darren can definitely relate to, and he’s happy to lend his support. But while he coaxes Vlad out of his shell, Darren ends up learning about Vlad’s past… and the danger Vlad is in. Darren only wants to help—help Vlad feel comfortable in his own skin and help him feel safe.

He hadn’t planned on falling in love.


“You asked some personal questions, just now,” Vlad said slowly.
“Uh. Yeah?”
“May I do the same?”
And there it was. “Okay, shoot, but I’m not promising to answer anything. Depending on the question. I still, like, barely know you.”
“Fair,” Vlad said. “You were… very mad at me, when we first met.”
“Uh. Yes? I was in major pain? That wasn’t a question.”
Vlad rolled his eyes. “Why were you so mad?” he said, carefully enunciating the words.
“Pain. Of epic proportions. I just said this.” Darren waved his hands in the air. “Think, like, someone reached into the pit of your stomach and started twisting things around, and maybe stepping on them, but also you kind of want to throw up, and on top of that your—”
“You don’t have to describe it,” Vlad said, looking alarmed.
“You asked!”
“No, I—” Vlad stopped and pinched the bridge of his nose. “Let me try again. When you told me you were menstruating, you yelled at me like I should have already known.”
“Oh. Oooooh. I thought you thought I was a girl.”
“Why would I have thought that?” Vlad asked, confused.
“Because you’re a vampire,” Darren said. “No, hang on, there’s an explanation. I’m half-fae, yeah?”
“Yes,” Vlad said drily. “You’ve mentioned it several times.”
“Shut up, your face is dumb. Anyway, half-fae, weird potluck of powers. I kinda said this before.”
“Okay?”
“So.” Darren waved at himself. “I can glamour. That’s uh, that’s why I look the way I do.” He gestured at his face then down at his chest. “But only to certain people.” He tipped his seat back, balancing on the back legs. “I’m not good at glamour. I don’t have the power for it. Luckily I don’t have a lot of changes to make. I take after my dad looks-wise. I’ve got my mom’s hair and complexion.” He pointed at his light brown hair. “But I’m fae-build pretty much through and through, and even if it’s the wrong build, they’re not exactly a diverse species. Tall, thinnish, yeah? I don’t care about being like, big and muscle-y ’cause I know it’s not in my genes anyway. Mostly I glamour a flatter chest, deeper voice, my face with some different angles, little stuff like that. But other supernaturals who can glamour tend to see through it, unless they’re not strong, or they’ve got their own weird power-problems or something. So if a fae, or, say, a vampire, hint hint, looks at me, they see, well, me, I guess. A slightly differently shaped me.”
“I see,” Vlad said after a minute.
“Well, actually, you don’t,” Darren said. “That’s the point. I figured that you’d seen right through my glamour, thought I was a girl, and was sniffing out my period anyway. Which, I will remind you, was super rude. Seriously, never do that again. And I was grumpy and hurting. Hence the getting mad at you.” He made a little ta-da wave. “That answer your question?”
“Yes. Thank you for telling me.”
Darren shrugged and dropped his chair back onto all four legs. “It’s cool, I guess. ’S’not like I didn’t just pry into your personal life. Get a little, give a little.”
“I’m glad,” Vlad said out of the blue.
“Glad about what now?”
“That I can’t see through your glamour,” he said. “I haven’t learned how to glamour, so I think that may be why. But I’d rather see the real you anyway.”
“Oh, uh, cool.” That was… that was really nice. Darren was sort of learning that Vlad could be really nice. “Thanks.”
Vlad tilted his head. “What do you do with other people who can glamour? Fellow students, adults?”
“Ah well.” Darren shrugged. “The explanations get old, believe me, but it’s been a few years since, you know. I realized I wasn’t a girl when I was twelve. Four years is enough time for most people to get used to the idea, especially when you grow up with them and they grow up with you. Most of the people around here who can glamour adjust their senses.”
“Most?”


Darren shrugged again and sent dark thoughts toward Levy Bittleberry. Worst camp counselor ever. “There are always gonna be jerks.”
“Hm.” Vlad looked back down at the textbook in front of him. “Can you explain a little bit about American government? This textbook does not match with some of the things I read online.”
Nope. Darren shot to his feet. “I have a better idea. How about instead of spending a beautiful Friday afternoon staring at my homework, we go outside?” At Vlad’s face, Darren added, “Please? I’ve been stuck at school all day, and you’ve been here. We don’t have to go into town or anything, but I’ve been inside forever. Fresh air? Sunshine? Sunshine that you totally promised won’t make you go poof?”
“I thought you said that your friend filled you in on your vampire history,” Vlad said, lips quirking just a little.
Darren huffed. “We only had like ten minutes since I don’t live all that far from school. Also, you’re stalling.”
“A little,” Vlad admitted. “I, ah, haven’t been out of the house much. I’ve sat on the porch a few times, trying to get used to things, and I’ve gone to the backyard, but that is all.”
“You’ve been here for almost a month and a half and you’ve never left Tabby’s yard? And going into town ‘once or twice’ doesn’t count!” Darren was appalled. He got that Vlad was a little anxious around people right now, but that was taking things too far. “You’re going to turn into a ball of dust and die.” Not waiting for Vlad to reply, Darren grabbed his hand and tugged. “Okay, no, that’s it. Come on, you are leaving this house.” Vlad didn’t budge even a little bit. “Your vampire butt is irritatingly immovable.”
“I was strong even before I was turned into a vampire,” Vlad said. He sounded smug.
“Good, yeah, that’s great. And I’m sure you have a lot of time to keep up with your exercise program since you never leave this house.” Darren huffed out a breath. “I mean, look, no pressure, I’m not gonna, like, steamroll you into leaving if you don’t want to. But holing yourself up in here and never leaving probably isn’t going to help you eventually deal with leaving. You’re going to turn into a crazy vampire hermit. And trust me, I remember that part of my vampire history lesson.”
Vlad’s face abruptly closed off. Uh-oh. Apparently crazy vampire hermits were another do-not-touch thing. Fine, then.
“Hey hey, I’m sorry.” Darren tried to let go of Vlad’s hand, but Vlad didn’t let him. Well, okay. If he wanted hand-holding, then hand-holding it would be. “Look, what I said still stands. You’re gonna go crazy cooped up in here. It’s not healthy. Like I said, we don’t have to go into town or anything but—how about the woods?” Tabitha, being a witch, had chosen a house fairly close to a small wood. It wasn’t the forest Bethany lived near, but it was still pretty good. “It’s only like a block or two away. My dad and I visit it all the time. If we’re quick, we probably won’t run into anyone. We could run it! You’re probably fast.”
Vlad hesitated, but he looked like he was considering the idea.
“I’ll show you a cool thing I can do,” Darren added. “Very much magic. Total fae stuff.”
“I suppose I could try it.”
“Awesome! Let’s go.” Darren figured moving faster was better; it gave Vlad less time to change his mind.
Once they actually reached the front door, though, Darren stopped, hand on the knob. True to the month of April, it was a nice, sunny afternoon.
“You absolutely promise you’re not going to go poof in the sun?” he asked.
Vlad rolled his eyes, but there was a hint of a smile too. “We have been over this, Darren. I am not going to go poof.”
“Good. I just don’t want Tabby mad at me ’cause I accidentally sun-murdered her cousin.”

Aidan Wayne lives with altogether too many houseplants on the seventh floor of an apartment building, and though the building has an elevator, Aidan refuses to acknowledge its existence. They’ve been in constant motion since before they were born (pity Aidan’s mom)—and being born didn’t change anything. When not moving Aidan is usually writing, so things tend to balance out. They mostly stick with contemporary romance (both adult and YA), but some soft sci-fi/fantasy has been known to sneak in as well, and they primarily write character-driven stories with happy endings. Because, dammit, queer people deserve happy endings too.