Rebellion is a story that evolved out of a Chinese History assignment where we’d been asked to write an essay on a rebellion/conflict that occurred in China. The examples were of course the Taiping and the Opium wars, which most of the class had chosen as it’s what the bulk of our lectures had been on. I, however, don’t always like to be a sheep and instead chose to write it on The Boxer Rebellion, a conflict I knew very little about. The information I uncovered about the Qing Dynasty and the politics with the nations leasing land off them, and the behaviour of the missionaries was both fascinating and horrifying. But it wasn’t until the following year that the first scenes were written for a Creative Writing paper I took. At the time I thought they’d form the middle chapter of a finished manuscript, except nothing ever goes to plan. By the time the first draft was completed earlier this year, that initial scene ended up as one of the last chapters.

Research become an important part of the writing process; a distracting one that lead me down various rabbit holes, some of which had nothing to do with the story at all. I scoured journal articles, books, websites to locate the information I needed, often double checking it too make sure it was accurate and the horrifying details of the conflict I learned continued to grow – some that made it into the story and others I had to leave out. But it wasn’t just the details of the conflict itself that I had to research. Technology was moving fast by the end of the Victorian era when Rebellion was set and I needed to make sure what was already available and what was not yet. 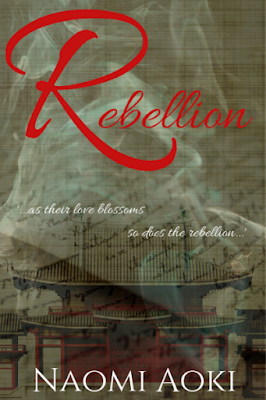 1899, political tensions are rising with the emergence of the Boxer Movement in Northern China, straining ties between the Chinese Imperial Government and the Eight Nations with stakes in the country. As a Captain in the Royal Marines, Alfred Cartwright is deployed to Shanghai, where he discovers more than he'd dared to dream of – Love. Not even the struggles with language or the fear of reprisals if their relationship is found out, can stop Alfred from falling for the Chinese man he encounters. But as the ant-foreigner sentiment of the Boxer Movement grows in strength, their relationship will be put to the test.

Where do Alfred's loyalties lie? With the man he loves or his country, as they stand opposite each other on a battlefield neither can escape.


Naomi would love to runaway to Japan or China and live there for a few years... but she can't. Instead she goes there in her books, hoping to drag the reader into a world they've never been to before.

Historical. Contemporary. Time offers no constraint to the stories she writes, happily dabbling in both so long as there is a happy ending.

She is a mother of three teenage children, one of whom loves to tell people that her mother writes romance stories about gay men just to see their reaction. While she could never claim to be fluent, she has just completed a Bachelor of Arts majoring in Chinese, with minors in Creative Writing and Japanese.

Her stories are based predominantly in Japan or China and her historical stories often involving time periods or situations not often talked about with her characters often being actively involved in the events occurring around them.