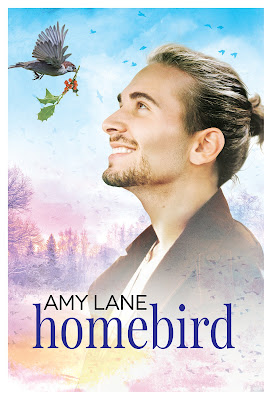 Crispin Henry isn’t an adventurer. He learned early on that the world is a frightening place and that home is rare and precious. If his friends didn’t drag him to sports games and ill-advised trips to Vegas, he wouldn’t get out at all—and his trip to Munich for Oktoberfest is no exception. But it’s there that he meets Luka Gabriel, and he learns to take a chance.

Luka is a free-spirited world traveler, working at Oktoberfest to feed his enchantment with new places and new people. His only possessions fit in his backpack, and he depends on the kindness of strangers for a place to sleep. Crispin should know better—but he takes Luka’s hand anyway, and together they turn three nights in Munich into the relationship neither of them has been brave enough to risk—and neither can let go of.

When Luka turns up on Crispin’s doorstep before the holiday season, Crispin takes him in on hope alone. Yes, he knows the odds are good Luka will flutter out of his life again and leave him bereft, but isn’t it worth it to see if Luka is a homebird after all?


So HomeBird is about a guy who goes on vacation with his friends and has a short fling with someone he meets.

It’s a lovely fantasy, right? But we’re all a little paranoid these days. Going home with someone we don’t know well is fraught with dangers, no matter how much our gut tells us to trust him.

But I swear! This isn’t romantic suspense! Crispin and Luka go to Luka’s lodgings for a night and have a perfectly lovely time! (And then another and another—but you have to read the story!)

But that doesn’t mean Crispin’s friends are okay with Crispin wandering off into the night.

And I’ll be honest…

I sort of love them more for it.

Nick closed the door on Luka and they clattered away, Crispin in their midst.
They didn’t stop for eight blocks, when they got to the train station, and Crispin was panting with exertion and a little dizzy from no breakfast. “The… fuck….”
“Breakfast,” Link told him, because duh! “There’s a breakfast place on the way to the castle—it’s supposed to be phenomenal. All traditional German food—it’s amazing.”
“Breakfast.”
The train came to a stop, and they waited for commuters to disembark before getting on.
“Breakfast,” Crispin reiterated once they were settled. “I have my first date for a decade and you have to get breakfast!”

“Are you okay?” Cam asked, voice hard. “Are you dead? Have you joined a death metal cult? We let our very shy friend wander into the night with a stranger, and these are things we would very much like to know before you go wandering back out tonight.”
Crispin scrubbed his face tiredly and stifled a yawn. “I could use another hour of sleep,” he told them with candor. “And breakfast sounds good, I won’t lie. And….” He shifted in his seat, aware that maybe that thing they’d done around dawn had perhaps been a bit of overkill. “I may need some time in the bathroom,” he said with as much composure as he could muster. “But otherwise, I’m fine.”
They were all regarding him intently, and he was reminded in a hard and beautiful way that for the last six years, these guys—these friends—had been his home as much as his house had been.
“It was a really nice night,” he said simply. “Thanks, guys, for, you know, saying it was okay that I left.”
Cam broke the uneasy quiet first. “Thanks for not getting dead,” he said, yawning. “And seriously, Link, he wouldn’t have been any less dead if we’d maybe spent an extra hour in bed!”
Link yawned too and checked his phone. “See what I’m doing here, Crispin? I’m setting an alarm. We should get there in forty-five minutes, so I’m waking up in forty. Isn’t that interesting, how using this little computer in my hand can save us so much worry.”
Crispin would have rolled his eyes, but Ray was slouched next to him, already snoring softly, and Crispin leaned his head on top of Ray’s instead. “Yeah. Phone. Magic. Wake us up when we’re there.”
Cam leaned against Crispin, and Nick leaned on Link. Forty minutes on the train was a godsend—none of them were going to pass up the opportunity for sleep.


So yes—it’s always wonderful to dream of a romantic vacation getaway.

But don’t forget to be practical, and have a group of friends who are anxious to have your back!

Connect with Amy on her website or her blog.