First, I want to thank My Fiction Nook for hosting me today. My new release, "His Cursed Prince", is an adaptation of Beauty and the Beast. It's lighter than my usual fare, and I had lot of fun with it. In keeping with that attitude, I thought I'd do a list for you today.

1. "I have to get my dog ready for a competition." As a result, he spent a year on the show dog circuit, even though prior to his saying this, he had never considered doing such a thing.

2. "If we go on a date and fall in love, and then I have to do a dress fitting for her, the pitter-pat of my lovestruck heart might cause me to jab her with a pin. Better safe than sorry."

5. "This is a really small village. How do you know we aren't related? Wouldn't want to risk it."


In the excerpt below, Tuck goes to extraordinary lengths to avoid meeting a girl his brother is trying to set him up with. 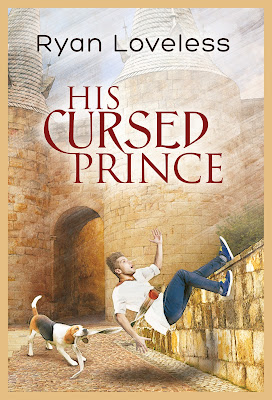 1. Given the choice between illegally scaling the royal castle’s walls to steal flowers for a client at his family’s dress shop or going on a date with a girl his brother set him up with (“He’s fertile, and he can sew!”), Tuck will scale the wall like a spider after a fly.

2. If, upon knocking himself unconscious when he falls off the wall, Tuck wakes up bruised, blindfolded, and inside the castle, where—based on the unearthly wails heard nightly—the prince no one has seen in ten years is probably a ghost, Tuck would still choose this over a date with a girl.


Three facts about Prince Frederick George Deor (Read and approved with great reluctance by Lord “Protocol is Protocol. Stop Being a Pain About It” Todd):

1. He brought a curse upon himself and now bears the skin of a snake.

2. He can’t take his eyes off the injured thief recovering in the castle.

3. Friendships born from lying and insisting the other person wears a blindfold can blossom into true love—which he needs to break the curse.


“Don’t take your coat off!” his mother said as soon as he stepped in the door. “We need purple wildflowers.” He threw his hands into a defensive position upon seeing her rushing toward him like a carriage out of control, and she shoved a pair of scissors and a brown potato sack into his hands.
“It’s too late to go into the woods,” Tuck protested.
“Tuckington, I am not going to adorn the dress of young Miss Pringle with weeds picked from the woods. Use your head, son! Go for the good stuff!”
“Mama, you’re not making—” He stopped talking when the glint in her eyes turned slightly insane. Shit. He began to back out the door. “You’ve got bail money in case I get caught?”


“Of course, dear.” Anna smiled brightly, looking more like her usual self. “And hurry back so you can meet the young lady Daniel has been talking to about you!”
“Right,” Tuck said, as the idea of sneaking into the castle grounds, risking his life scaling the stone wall, dropping onto a muddy hill with no traction, and avoiding the guard dogs and the security detail suddenly seemed like a great idea.
The castle had always had an amazing garden, but ever since Prince Frederick had disappeared, it had been left untended. Wildflowers grew alongside rosebushes. It was a ramble. Usually Daniel did the flower run, after which he was intolerable because he came back all “Return of the Conquering Hero,” full of bombast and backflips.
The last time Tuck did it, he’d been bitten by a dog (thankfully trained to contain and not maul) and arrested.
Jail hadn’t been so bad. He’d spent only a few hours behind bars, and he’d exchanged recipes with a senile old lady in custody for exposing herself in a crosswalk. His mother then paid to get him out and managed to convince the arresting officer to drop the charges because Tuck was “touched,” and had “gotten lost” in the castle garden. Tuck kept his mouth shut and his head down as she led him out of the building, though he definitely caught the sympathetic looks the officer gave his mother, as if she were a saint for dealing with such a testing child.
Back at the section of wall where he had run his fingers on his earlier walk, he looked inside the bag. His mother had placed a paper bag inside. Its contents—hamburger stuffed with sleeping pills—already bled through.
Tuck slung the bag over his shoulder, hooking his arm through the cord. He checked that no one was watching, caught hold of the wall, and hoisted himself to the top. After scrambling to his knees, he wobbled and glanced down. The castle grounds sloped up to meet the castle wall at its half-height, which was about six feet beneath Tuck. An uncomfortable drop for him—he got nervous on the shop’s stepladder—but a heck of a lot better than the twenty-foot one a few yards away. He slung the bag to his front and prepared to lower himself.
And then he was falling, yanked down by a sudden weight as something caught the bag. A split second before his head hit the ground, he registered a furry body trying to make off with the sack that was still caught around him. He landed half in mud and half on stone, banging his head hard. He felt the dog lying down next to him, gnawing on the bag. As his eyes closed and he thought at least I don’t have to impress a girl, he contemplated that maybe it was time he admitted he was gay.


I hope you all enjoy the book if you decide to read it!

Ryan Loveless is the author of numerous M/M romance novels and short stories. She is honored to be recognized as a Rainbow Book Award winner (several titles), Epic eBook Award finalist (In Me an Invincible Summer), and a Florida Author and Publisher Association Awards bronze medalist (Ethan). She lives in New York with her family, a sentence that brings her great joy to write.