Chasing Forever is the final book in the series This Time Forever. Brian and Mal's story is special in all sorts of ways. Even though these books all standalone, Brian has been there since the beginning--as the character everyone loved to hate in the first book, and the character who seemed to have more to him in book two. In this final story, I share who Brian really is, and hope you'll all come to love him as much as I do. Then there's Mal, his other half, my serious soldier who has been waiting all his life for a challenge like Brian. Sometimes we have to be knocked lower than ever before in order to reach that high, and Mal's journey is one I treasure. I hope you enjoy reading this story of redemption and learning to live out loud. 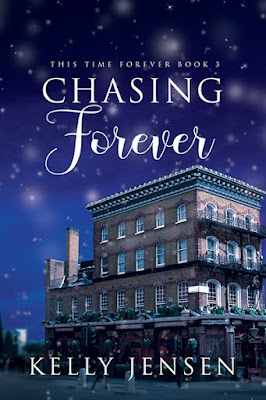 Old wounds, new directions, and a forever worth chasing.

Malcolm Montgomery was a history teacher and track coach until an accident left him with two broken legs. He’ll recover, but life has knocked his feet out twice now. He’s not sure if he’s ready to try again, especially when it comes to love—and slick guys like Brian Kenway. Still, he needs help mentoring the school’s LGBTQ society, so he asks Brian to take some responsibility.

Brian has been hiding behind his reputation as a liar and a cheat for so long that he actually believes he’s that guy—until his nephew, Josh, turns up on his couch, tossed out for being gay. Brian has never considered being a father, but he knows all about being rejected by loved ones. Now Brian wants to be more: a partner for Mal and a role model for Josh.

But when Mal’s recovery is set back and the sad truth of Brian’s past is revealed, the forever they’ve been chasing seems even further from their grasps. It’ll take a rescue effort to revive their sense of worth and make Brian, Mal, and Josh into a family of their own.

About the This Time Forever Series

Behind the Names
If you’ve been following the tour for this whole series, you probably already know the story behind Brian’s name. Briefly, several of my characters have exes named Brian. Somewhere along the line I developed the habit of calling every not so nice ex the same thing—at first by mistake, then out of amusement. So when I started writing Chasing Forever, Brian already had more of a legacy than this one series. (Not really, but kind of?)
Mal is short for Malcolm and it’s a name I really like—which is pretty much the reason I chose it.
Read on for the origin and story behind all the names in Chasing Forever!

Malcolm Montgomery
As I mentioned earlier, I like the name Malcolm. My opinion is based mostly on an uncle I have with that name, who is a really nice guy. Friendly and warm, but stern when he has to be. Great sense of humor. I tried to infuse my Mal with those same qualities.
Malcolm is from the Scottish Máel Coluim which apparently means “disciple of Saint Columba,” who is a reasonably important figure in Scottish history. Saint Columba is credited with spreading Christianity in Scotland and founding the abbey at Iona.
Although my Mal isn’t religious, I do love the tie-in with such an important figure.
Montgomery means mountain, and is pretty damn appropriate. ☺

Brian Kenway
Interestingly enough, Brian means hill, or more laterally, high or noble. So, I paired a high, noble hill with a mountain. Nice going, Kel. I do love the high noble extension, though, because it’s so much what Brian doesn’t think he is. And yet, when you look at his actions—not toward himself (and by extension his romantic partners), but toward those around him—he is a very generous and noble man.
Kenway means brave in war. Another wonderfully appropriate name.

Donald Montgomery
Mal’s twin brother. I chose Donald because I thought paired well with Malcolm. Donald is Gaelic and means ruler of the world. Ha! Although the younger twin, Donny is the dominant personality. He has always looked out for Mal, even when Mal doesn’t need it. A part of Mal’s journey during this novel is in learning when to tell Donny he can step back.
I loved writing brothers who were really close and really enjoyed exploring their unbreakable bond.

Vanessa Smart
Brian’s best friend. The name Vanessa actually has a really interesting history. It was invented by an author named Jonathan Swift by combining the first few letters of his friend Esther Vanhomrigh’s first and last names. Vanessa was later used for a genus of butterfly. I picked the name because I liked the sound. I also thought it was beautiful and sophisticated.
Smart comes from an old English word “smaert,” meaning quick. I chose it because I liked the way it sounded as a foundation name. Smart Kids is pretty catchy, don’t you think?

Vanessa’s uncle and Brian’s guardian. Tristan only gets a few mentions in the book, but he was an incredibly important figure in Brian’s life. Tristan is the man who got Brian off the streets and insisted he finish his education. It’s during his time with Tristan that Brian is first exposed to building and construction and so figures out what he’d like to do with his life. Tristan’s mentorship has a lasting effect on Brian, not only in that he learns to accept his sexuality, but is inspired to help others as Tristan helped him.
Tristan is a variant of the Pictish name Drustan, with the Latin tristis meaning “sad.” While Tristan is rather a tragic figure in Brian’s past (he dies of AIDS only a few years after rescuing Brian), his legacy is one of the most important in the book.

Joshua Kenway
Mal was originally called Josh and Josh was called Ethan, and Ethan (Josh’s classmate and friend) had another name I can’t remember. As sometimes happens when I’m writing, though, the name Josh didn’t quite fit for Mal, and so I chose a new one. I still wanted to use the name Josh, though, so I gave it to Brian’s nephew because I liked it better than Ethan, which I’d chosen simply because it fit the time period in which Josh was born.
The name Joshua has an incredibly rich history and literally means “Yahweh is salvation.” Although references to religion in this book are fairly sparse, there is a lovely moment where Brian assures Josh that he is as God made him, meaning that being gay isn’t a choice, but an essential part of his character, and that he is worthy of love just as he is.
Looked at another way, Josh proves to be Brian’s salvation, and vice versa as these two discarded souls form their own family and strive to be the best versions of themselves, together.

Leo Green
I’ve always wanted to use the name Leo and it just seemed to fit my friendly, neighborhood bartender. Leo is almost a tertiary character, not getting a lot of development on the page. But what I got to share of him, I really enjoyed—especially his change of direction at the end. It really seemed to suit his character. If I ever do revisit this series, I’d be tempted to write a prequel novel where Leo meets his husband Kelsey. Leo pretty much means lion and that suits him very well. Leo is the leader of his pack and fiercely protective of those he cares for.
Green is a name I plucked out of the air and originally, I was going to call the Colonial Tavern something Green. Green’s, or the Green Inn. But as I built Mal (and Leo’s) backstory, the idea to name the tavern after the high school football team occurred and I liked it very much.

Lois
Even the name of Mal’s cat has significance. I named her after his and one of my favorite authors, Lois McMaster Bujold. There’s a scene in the book, set at the Colonial, where Mal gets to meet Charlie and the pair of them disappear into nerd nirvana discussing the Vorkosigan Saga which are among the best of Bujold’s books.

I always enjoy sharing the thought process that goes into choosing the names of things. I hope you’ve enjoyed learning a little more about my characters and that you’re inspired to read their story.


To celebrate the release of Chasing Forever one lucky person will win a $25 Riptide Publishing gift card and a swag pack of stickers, art cards, and bookmarks! Leave a comment with your contact info to enter the contest. Entries close at midnight, Eastern time, on December 15, 2018. Contest is NOT restricted to U.S. entries. Thanks for following along, and don’t forget to leave your contact info!