Audio Book Review: P.S. I Spook You by S.E. Harmon 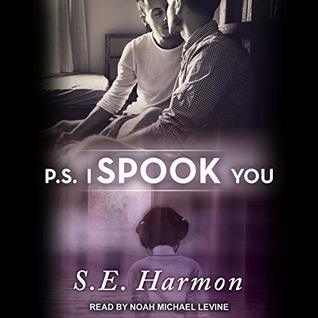 SSA Rain Christiansen used to be the agency’s golden boy. It just takes one moment of weakness, one slight, tiny, itty-bitty paranormal sighting, and all of a sudden he’s the agency’s embarrassment. His boss gives him one last chance to redeem himself—go down to Brickell Bay, play nice with the local police, and leave the ghost sightings behind. Rain is determined to do exactly that, even if it kills him.

Cold-case detective Daniel McKenna’s latest investigation is going nowhere fast. Five years earlier, high school student Amy Greene went missing after leaving her part-time job and was never seen again. Daniel is glad to finally have the FBI help that his department requested, even if it does come in the form of his ex.

It doesn’t help that Rain is pretty sure he’s falling in love with Danny all over again—if he ever stopped. Add to that the frustration of seeing ghosts at every turn while he works a case that’s stalled in its tracks, and Rain is starting to wonder if second chances and happy endings are just for fairy tales.

I see dead people and...more importantly...they won't shut up and leave me alone!!!

I'm pretty sure that thought is frequently in Rain Christiansen's mind. As on of the FBI's golden boys Rain is at the top of his game until a tiny little paranormal incident crashes his world and then he's not. Rain's boss gives him one last shot at redemption when he sends him to Brickell Bay to help solve a cold case...it's the last place he wants to be. Brickell Bay use to be home for Rain, but he's tried hard to leave all that behind.

Not only is Brickell Bay his family home it's the home of the man he once loved and if he's honest about things...he still loves Danny. Daniel McKenna works as a cold case detective and his current case just keeps getting colder and colder until some much needed help arrives in the form of  Rain Christiansen, Danny's ex, who shows up in town with his own personal ghost in tow, a ghost named Ethan.

Ethan's dead and he knows this but he needs Rain to get a message to his family before he can move on and he's willing to do anything to get Rain's help with delivering it. If he hast to haunt Rain or follow him to Brickell Bay, help him solve his latest assignment or even find and bring him other ghost to help him solve things...he'll do it.

More often than not the interactions between Ethan and Rain were laced with sarcasm and humor as we those between Danny and Rain. Although there was a lot of frustration, anger, and sexual tension between these two men as well.

"P.S. I Spook You' is a solid blend of romance and mystery with both plotlines sharing center stage from start to finish. The story flowed at a steady pace that was easy to follow and consistently held my interest not allowing me time to become bored or for my mind to wander off to other things.

It's been a while since I've enjoyed a series narrated by Mr. Levine. His voices gave me distinct and expressive voices that carried me smoothly through the story from start to finish adding to my enjoyment of an already very enjoyable reading/listening experience.

While 'P.S. I Spook You' was not my first book by S.E. Harmon it was definitely different and unique to the other stories by this author and I very much enjoyed this foray into the  world of the paranormal. While it was definitely a serious story but it was tinged with a solid dose of humor that enhanced added levity and simply made things more interesting and fun.

I look forward to enjoying more from both this author and this narrator and would definitely recommend this one to fans of romance, murder mysteries, the paranormal or simply a good story they can enjoy.

An audio book of 'P.S. I Spook You' was graciously provided by the publisher in exchange for an honest review.