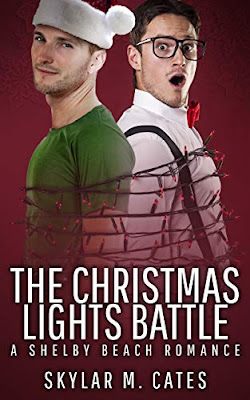 
For a single dad and his neighbor, the Christmas competition is on!

Julian Moss wants to give his children a happy Christmas. Since his divorce, Julian has no time for a social life; he’s been doing the tiring work of two parents while his cheating ex-husband dodges his responsibilities. If that isn’t stressful enough, he has to deal with his new—and ridiculously good-looking—neighbor and his noisy dogs. Christmas used to be Julian’s favorite holiday, but lately all he sees is the cost. Then Julian’s young son tells him about a Christmas lights competition with a much-needed prize.

Leo Adams is going to be alone for Christmas…again. All he’s ever wanted is to be accepted by his family, but he knows that will never happen. Deciding to focus on his career as a personal trainer, Leo develops a boot camp program on the beach, but he needs publicity. The lights competition offers Leo a way to get some free press, and if it annoys his snooty neighbor Julian—all the better.

The battle is on, and both Julian and Leo want to win. The stakes are high, the reward is great, and the neighbors are in it to win it. There’s nothing like a little competition to make Christmas at Shelby Beach extra merry and bright.

Leo and Julian don't take the road well traveled. Julian dislikes Leo on sight for no reason except that Leo is stupidly hot and his dogs bark at all hours of the day and night.

Except the dogs belong to Leo's friend for whom Leo is house sitting, and Leo is actually a very nice, positive guy raised by crazy religious parents who were cold and emotionally abusive.

Once Leo and Julian stop fighting their mutual attraction, they become lovers and then friends. Indeed, instead of competing against each other to win the Christmas lights competition as they'd originally planned, the MCs join forces to beat the reigning two-time champion, who happens to be a racist, homophobic old crone.

The story is light on the plot but brimming with sweetness and steam. I do love me a sexy holiday story!

Julian has two adopted children and a selfish, immature ex-husband who cares more about his new boyfriend than his kids. I wanted to know more about Julian's kids; how old were they when he adopted them, for example?

Leo is really good with Julian's children, but Julian isn't ready to announce their relationship to the world because he doesn't want the kids to get overly attached (which was kind of stupid, since they already knew and liked Leo).

Leo is trying to build up this fitness training business, and Julian's mom happens to be one of his beach Zoomba clients.

I'm thinking this may be the first book of a new series because the story ended rather abruptly with a tentative HFN. Plus, numerous secondary characters were introduced, like Leo's friends and Julian's brother, who seemed like excellent candidates for a romantic lead but didn't contribute much to the plot.

Recommended for a lower angst, sexy story with a fun Florida setting, quirky family dynamics (Julian's mom is a hoot!), and hot men dancing on the beach.