Today we shine the spotlight on Cecelia Storm and


Behind the Themes
I’ll be the first to admit that a billionaire romance set in New York City is far from original, but as someone who lived there for many years, I knew I could paint an accurate and emotional portrait of the city.
Physically, New York can be both beautiful and repulsive. The perfect image of that dichotomy is a snapshot of the streets after a snowstorm: if you get out there early enough, it’s like a crisp, white blanket was tossed over all the concrete, softening the city’s edges. But, ten minutes later, thousands of people, buses, and cars will emerge, and the sidewalks will become raging rivers of black mush.
The social themes in the book are also drawn from my experiences living in New York. The money gap was something I never got used to. Once, on Madison Avenue, I saw a man in a dark tailored suit step out of a black town car and onto a homeless woman’s hand. He yelled at her to get out of his way and walked across the sidewalk to the Prada store. He became my villain, and set the stage for a city divided by wealth and poverty, both equally massive.
There is a darker theme in the book about sexual harassment and assault. For me, the best thing about fiction is the power it gives to safely explore and work through my anxiety, depression, and trauma. I think some folks discount such an idea and say, “Whatever, I just like dirty books. There’s no need to make it serious or turn it into commentary.” But I believe it’s both; cathartic for me as a writer, and open to any interpretation from the reader. 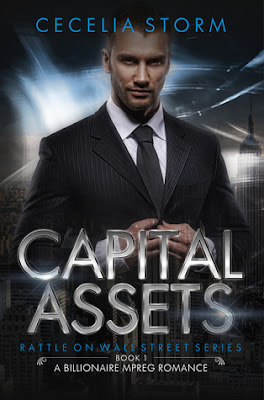 You don't know me, but I need to share my story with you. My name is Archer Wallace.

I'm an alpha hedge fund CEO in New York City.
For years I’d avoided omegas. They were too tempting. In heat, they pulled alphas like me across a hot, dangerous line. I couldn’t risk hurting another one...


Until I caught his scent on a cold Manhattan night. My extravagant world crashed around us as our bodies and hearts collided. His taste brought me to my knees. All this time I thought I was different. I thought I could change this city, choked by corruption and greed. But one omega, Jeremiah Phoenix, struggling to find his way, showed me the frailty of authority, and the power of acceptance.


Now we fight. We stand up to those who seek to break us; but how much pain can we endure? Is our love and future worth the blood and bruises? How can a new, infant life possibly spring from the ashes around us?

“It was a kiss I’d never felt before; it was the slow, gentle taste of a person who holds a piece of your heart, and whom you have greatly missed.”


Come with us as we wade through agonizing mystery, hot sex, tearful pain, and comforting joy. Help us find the love we know is in our broken hearts.

Capital Assets is a gay MPREG romance between a wealthy, CEO alpha whose daily life is dictated by his dark past, and a young, late-blooming omega who struggles against familial expectations and a society against him.

Author Cecelia Storm explores a darker side of romance and sex by addressing the complexities, consequences, and trauma associated with sexual assault, and how they can affect relationships.

Archer
His words burned inside my ears. He was thanking me for that night. Thanking me. As if my actions were something to commend. The things I could have done to him...the things I wanted to do. The things I still want to do.
As he turned to leave, I reached out and took his wrist in my hand. My hold was tight, and I could feel his pulse under my fingertips. “Wait.”

He looked back over his shoulder with wide eyes.
His soft skin in my palm was like a high I could never come down from. I rubbed the underside of his wrist with my thumb. It was like warm velvet. His muscles relaxed, and he turned to face me.
“I can’t...I can’t explain it to you properly,” I said. “Not in a way where I think you would understand. I’ve...made mistakes. I’ve done things I’m not proud of as an alpha, because of what I am. I’ve spent years, years, keeping my distance from omegas. I don’t even date.
“But, when your scent found me by the river that night, the temptation was beyond me. I should have been able to control myself, to resist, but I didn’t. I was weak, and you were vulnerable. You...you thank me for saving you from that other alpha, but...but I would have been that alpha, too.”
Jeremiah shook his head furiously. “No, you wouldn’t have. You were different from him, I felt it.”
I sighed. “Jeremiah. I’m glad you weren’t hurt that day, but I—”
“You didn’t do anything I didn’t want you to do.”
I scoffed. “You were in heat—”
“I know I was!” he interrupted. His face was red, and a vein pulsed along the side of his neck. “Believe me, I know. I felt it burning inside of me. But I wasn’t scared of you. The other alpha...I knew as soon as he touched me that he was going to take whatever he wanted. There was a...a violence in his eyes. But you....” Water collected at the corners of his eyes. “You weren’t going to take anything from me. No... I was going to give...give you...” He sighed, frustrated.
He snatched his wrist away from my hand and wiped tears from his cheeks. All I wanted in that moment was to kiss those tears away.
“Oh, Jeremiah, I—”
I couldn’t form any words because Jeremiah leapt into me. He grabbed my shirt in both his fists and pulled me down to him. His mouth collided with mine, and his tongue slipped between my lips. My body froze. Did he not hear anything I said? That I wasn’t different from any other alpha? That I’d made mistakes? That I could hurt him?
He was so close, so warm. His sweet, delicious taste spread through me. My eyes rolled back, my lids closed, and my tongue slid along his lip to taste him more. His mouth opened up to me, willing, asking. My mind blurred. I tightened my arms around him, drinking my kiss from his mouth like a drunk starved of his favorite gin. We fell deeper into one another. Our hands explored our bodies, and he moaned against me—soft sounds of content and need.

Cecelia Storm is the former gourmet sandwich maker from your local health food store, and the author of the new novel Capital Assets. She explores contemporary social and political issues through a guise of very sexy gay love.

She likes to add dark and suspenseful themes in her stories, which contrast nicely with her simple life by a river in Tennessee. When she isn't wordsmithing, she rescues small animals and tours Europe as often as possible.

“My idea of a perfect day, is a dirty book, in busy café.” -CECELIA STORM