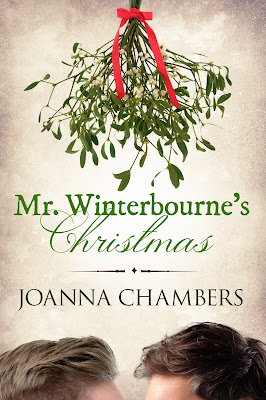 Lysander Winterbourne has been living happily at Edgeley Park for the last eighteen months. By day he is Adam Freeman's estate manager, by night, his lover...but Adam never speaks of his feelings and Lysander has no idea whether their relationship is any more than a convenient arrangement for Adam.

When the two men are invited to Winterbourne Abbey for a family Christmas, matters quickly come to a head. Snowed in at the Abbey with a house full of guests, Lysander has to face up to shocking revelations, long-held secrets and a choice he never expected to have to make...

I absolutely adored this follow-up to Introducing Mr. Winterbourne. In my review of that book, I wrote: The only thing about this story I didn't like is that it ended (on a rather tentative note).Joanna Chambers must have heard my plea, because this holiday novella leaves no doubt as to Adam and Lysander's future. Mr. Winterbourne's Christmas begins with a HFN and ends with a HEA. Adam and Lysander have been together for a year and a half, but neither has expressed his feelings. Adam wonders how long social Lysander will stay without getting bored, while Lysander worries Adam keeps him around only because he's a good estate steward. When Adam is invited to Lysander's family's house for Christmas, the two are placed in separate wings of the house and can't catch but a minute together. Someone, or something, always interrupts.
Chambers creates a wonderful cast of secondary characters, all of whom are involved in the bedroom drama that takes place over the course of several days: a lady sprains her ankle (or does she?); two (three if you count the MCs) couples are caught in rather compromising (and utterly hilarious!) situations; Lysander's great aunt is not nearly as senile as everyone assumes; Lysander's father underestimates Adam, and his son; a hasty engagement is announced; and everyone drinks far too much wine. Too many side plots and characters can prove distracting, but that is not the case here. This story is charming, very funny, sexy (with just enough steam), and romantic. The holiday spirit is out in full force, what with traipsing through the snow and finding mistletoe in the English countryside. And the ending offers not only a HEA for our MCs but a potential pairing between Adam and Lysander's best friends. Oh, please, let it be so! I'm not ready to leave these characters behind.

** A free copy of this book was provided by the tour organizer for an honest review. **