The highly anticipated second installment in the Plummet to Soar Series is now available! 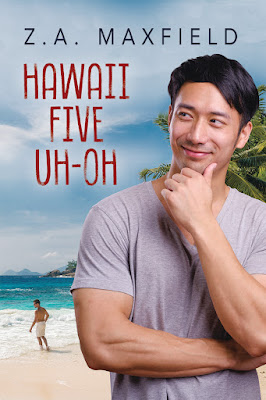 Sarcastic cop Theo Hsu returns home to Hawai‘i after realizing he wants more from his life, and also, less. He hopes to reconnect with his past and make amends with his mother, who remarried a cool, distant man, leaving Theo unsure where he stands.

It doesn’t take him long to figure out where he wants to stand, though: right next to his childhood best friend, tattooed detective Koa Palapiti. Theo would like to upgrade their relationship, but Koa is putting out some seriously mixed signals. It’s a mystery Theo can’t let go, but just as they start to connect, kidnapping, murder, and a deadly game with international stakes get in the way.

Koa wants to keep Theo out of it, and if it comes to a choice between him and Koa’s partner, Freddie Ortiz, Theo doesn’t like his chances.

But even if Koa wants to push him out of the investigation, and his life, Theo still has a few tricks up his sleeve. It’ll take all his special gifts, ingenuity, risk-taking, family ties—and even some kinky undercover work—to save the day… and the man he never should’ve let get away.


“Come with me?” Theo mouthed. He let his body language indicate the back door, miming the sign for smoke. He tilted his head and walked toward the back of the bar.
Koa caught up to him before he got very far. “You mom’s gonna fuck your shit up if she finds out you smoke.”
Theo didn’t smoke habitually, but sometimes he dug a Djarum Black cigarillo because they reminded him of his dad. The bar had filled up, and a smoke was an excuse for some air. An ironic excuse.
He pushed through the door behind the restrooms, jabbed a rolled-up newspaper in the jamb to keep it slightly ajar despite the Keep Locked sign, and lit one up.
First smoke in a while. He took a deep breath and let the unaccustomed rush hit him. It tingled in the tips of his fingers and toes.
“That’s your blood circulation being cut off, Dad.”
“I know it, but it feels good. And cloves. They smell like Christmas. Tell me you don’t love the smell of cloves.”
“They’re gonna kill you.”
“They’re not gonna kill me.”
Theo’d always hated it when his dad was right.
“Oh, Theo.” As if he’d heard Theo’s thoughts, Koa closed his eyes and inhaled deeply. “That smell brings back so many memories.”
Theo offered Koa one, but he shook his head. “Can’t do that shit. Don’t want to lose my edge.”
“You have an edge?”
Theo wasn’t hooked like his old man. He could take the smokes or leave them. He couldn’t afford to lose his wind either, especially now that he was chasing people on foot a lot more often, so maybe he did it once or twice a month. Usually like this, outside bars, when he was hooking up. It was the perfect crutch. Something to do with his hands, something to keep him from grabbing Koa Palapiti around his neck and dragging him in for a kiss so filthy he’d never forget it.
“Te?” Soft and provocative, Koa’s voice sweetened the air. How he wished he could tell Koa the whole truth. Taste those words on his and Koa’s tongues together. Above their heads, a security light seemed to spit and flicker. Koa grinned and stepped forward. “You haven’t called. How come?”
“You haven’t called me either.” Oh yeah. Now Theo smelled not only Koa’s cologne but the slightly aroused sweat beneath it. His scent was sharp. Pungent. Theo, who liked men and liked fighting and fucking and sweat, got a fizzy, almost electric charge out of it.
He said, “You smell fucking good, Woodie.”
Koa, whose once racy nickname came from Koa wood—that specialty lumber from the Acacia tree found all over the Hawai‘ian Islands—whispered, “Subtle.”
“Not known for it,” Theo admitted.
When the door burst open behind him, he had to leap out of the way.
“Special K.” Freddie dislodged his makeshift doorstop when he emerged from the wedge of inside light. When he then let the door go, it pistoned closed behind him with a sigh, and probably locked. Great.
Theo’d encountered Freddie a few times at the gym, and so far he wasn’t impressed. Freddie was one of those guys who didn’t like hearing that anyone else might have some skill, or probably he didn’t even like puppies, because he was just that guy.
So when Theo’s old coach praised Theo, welcome back, hometown boy makes good, and all that, of course Freddie Ortiz had to try to take him down a notch. He’d gotten in a lucky—some would say dirty—punch the last time they’d sparred.
“You ready?” he asked Koa. “We gotta bounce.”
“No.” The two of them stared at each other for a few seconds during which Ortiz made a long, thorough perusal of Theo’s body. Koa sighed. “Wait for me inside, O.”
“But you said we were going an hour ago.”
“That’s one, Fred.” Koa narrowed his eyes at his partner. Friend? Lover? Hard to tell. “Do as I say.”
Theo did a double take. “Didn’t know you had kids, Palapiti. Past his bedtime?”
Ortiz leaned against the jamb. “I ain’t sleeping tonight, brah. Maybe you will, huh? Tucked away in your bedroom in your mommy’s nice little—”
“Shut up, O.” The muscles in Koa’s neck strained visibly. “You’re on two.”
Fascinated, Theo watched them. He’d never seen them interact up close, but obviously they had a thing. Disappointment probably sketched flags of hot color on his cheeks when he met Koa’s gaze again. Something flickered there, some apology or protest, but then it died.
“I’ll be there in a sec,” Koa reiterated.
“Why bother with Hsu, man?” Ortiz seemed to resent this more, because he wasn’t done mouthing off. “You know you ain’t getting what you pay for there.”
Theo’d had enough. He went for Ortiz. “That’s the third—”
“Nope.” Koa’s arm came out to clothesline him. It was like steel; he couldn’t budge it. “Stand down, Theo. Freddie’s an asshole, but he’s mine, and I’ll deal with him. He owes me five now. Good ones.”
“Five?” Freddie let out a snort of disbelief.
“With a cane.” The words drew serious energy from the lack of emotion with which Koa said them. “Every violation comes with a price, O.”
Theo shivered. His dick—which had shriveled with outrage at Freddie’s arrival—now grew like the Grinch’s heart. Was Koa serious? Was he actually interested in caning people? Theo would’ve asked right goddamn then and there, but Koa had already dismissed him. The expression on his face, while mild, boded ill for whatever part of Freddie the cane was gonna land on.
“Kekoa Palapiti’s a kinkhound.” Theo waited for Koa to turn to him before adding sweetly, “You think you know a guy.”
Koa only smiled, but oh, a smile like that was probably against the law in all fifty states and the territories. A smile like that could get a guy in deep, deep trouble.
Too bad Theo welcomed trouble these days. He invited it in. 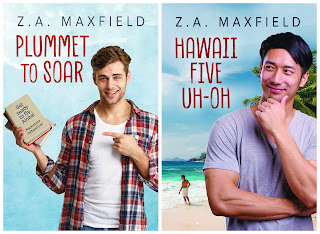 Z. A. Maxfield started writing in 2007 on a dare from her children and never looked back.  Pathologically disorganized, and perennially optimistic, she writes as much as she can, reads as much as she dares, and enjoys her time with family and friends. Three things reverberate throughout all her stories: Unconditional love, redemption, and the belief that miracles happen when we least expect them.

If anyone asks her how a wife and mother of four can find time for a writing career, she’ll answer, “It’s amazing what you can accomplish if you give up housework.”

Readers can visit ZAM at her