Still single, despite his best efforts, Kev is a gay cross-dressing teenager, searching for love in the late nineties in Wiltshire. He may not know whether to put Yours Sincerely or Yours Faithfully at the end of a letter, but he sure can belt out a show tune in a pair of heels and a frock.

Looking after his worrying mum, who refuses to slow down despite having a funny turn and ending up in hospital, Kev’s working in a shop to support the household now his dad has left. Irreconcilable differences. His dad said Kev needed fixing and Kev and his mum thought he was perfect as he is.

Tony, his best friend and Human League fan agrees, although he thinks Kev’s a chaotic big-hearted, trusting mess. But he’s Tony’s mess and they’re there for each other through useless boyfriends, jobs, and studying. Because that’s what friends are for, right?


Contains an inordinate amount of singing on stage, many costume changes, lashings of heart, family and friendship, an almost complete absence of the internet and a big dollop of optimism.

Still no sign of Kieran. He was in Australia with Jo, living it up in the sun, enjoying the fun with the surfers and costumes and whatever else they had planned. And where was I? I was still in the same little village just outside Salisbury, with Mum. Who was better now. On the mend the doctors said. Making a full recovery, was another phrase they used at her review meeting.

I knew my luck was going to change because it was my birthday. Nineteen. I was in the final part of those teenaged days. This time next year, I’d be twenty. A proper adult. Probably.

Anyway, that’s a year away.

I was at the bar, of the Sailor’s Arms pub, in Southampton, getting Tony and Donna a drink.

Tony said, flicking his fringe from his eye, “One round, and then it’s back to us paying. This is your night. I told you how it was going to work, didn’t I?”

Donna sipped her lime and soda, the designated driver for the night. “Same again. Stack ’em up baby and I’ll glug ’em down.” She slapped her thigh. “If half as much has happened to you as he’s told me, you should be selling the rights to your story to a film company, love. Get back sharpish I want to hear all about your last gig. He said everyone stood and clapped at the end and asked for an encore.” She turned to Tony.

He nodded, flicking his fringe again.

So, in preparation for regaling them with the story of my past glories, I went to the bar for my one round of the night.

No Jo and Kieran because, oh yes, I told you that. The bar was three deep and I stood politely, waiting my turn, trying to catch the eyes of the bar staff with a smile. Much better than waving money at them. Oh no, never do that.

I wore a very understated and normal pair of flared jeans, platform trainers and a grey T-shirt with three-quarter length sleeves, Chinese wording across the front. Goodness only knew what it said, but its bright yellow and white had caught my eye in the shop. It had been a busy week of performing, lots of different costume changes, sets to learn, so tonight I wanted a night off from all that. And a night off from looking after Mum—not that I begrudged her it, not at all, but I wanted a night of not having to worry or think about her and taking her to appointments, picking her up, having to slip off work early to collect her, fitting eighty minutes of things into an hour. All that. And the Plan. I definitely wanted a night off from the Plan. And aren’t they always the nights when something unexpected happens? Like when you’re really gagging for it, and really on a manhunt, it’s a barren desert, but when you’ve sworn off men, it’s like a real-life underwear catalogue for Calvin Klein.

Well, this was one of those nights, this was the night, he came along.

And there in front of me, all six feet six and a bit of him, dark blond hair, dark jeans and a red and white plaid shirt, was a man who reminded me of He-Man.

“What have you done to mean you’re getting all the drinks?” He smiled, and his teeth were almost as white as He-Man’s too.

I smiled at him weakly. Now was not the time for men. Now was the time for friends, that was what we’d agreed a while ago, since my run of terrible luck with boyfriends over the past year.

He held his hand for me to shake. “Aaron.”

Another weak smile. I really wanted him to leave me alone, but part of me, and I was well aware which part, wanted to see if he still looked like He-Man under the plaid shirt, or whether he was wearing one of those fake muscle stomachs I’d read about in Gay Times. I caught the eye of a barman, shouted my order and thanked him.

Aaron’s hand hung in the air between us, not quite limp, he didn’t look like the sort of man who’d have anything limp about him, no, it was more in anticipation. He had a light dusting of mousy blond hair on the back of his hand, and his nails were perfectly clean and trimmed. “Why are you here tonight? Look, if it’s with friends, I’m just making conversation, I’ll leave you alone once I’ve got my drinks. I’m only having one, and then I’m off. I’m here on my lonesome.” And he did the smile thing again, and this time his blue eyes did something too, a sort of smile with the eyes, and I knew he wasn’t lying.

My stomach fluttered with butterflies. Shit, I think he might be my next mistake. I shook his hand. His handshake was firm. A good pump up and down. Smooth hand. It smelt of hand cream. He didn’t roof houses or shift pianos for a living. I looked up to his face. “It’s my birthday.” I was still holding his hand and found myself smiling back at him, staring into his greeny-blue eyes.

“How come you’re buying the drinks?”


“They’ve already got me a few, and I don’t want to take the piss. They did say it was my night, I could do anything I wanted, I didn’t have to pay for a thing. But I don’t want to freeload off them. Not with friends. You know?”

“I’ve just left an old friend’s twenty-first. Not that old. He wanted a pub crawl in the city centre, so we started at Above Bar and worked our way down towards St. Mary’s street.” He paused, told the barman what drink he wanted, then returned to staring at me. “He’s not that old, this friend. Twenty-one’s not old, is it?”

I laughed. “I’m nineteen, so you’re an old man as far as I’m concerned. Once you’re in your twenties, it’s downhill all the way. So I’ve heard.”

He knocked my shoulder playfully. “Cheeky. Anyway, after all that beer swilling in the sports bars. We ended up at the one by the river. They all wanted to go, so I followed alone.”

I knew of it well. It had a TV to rival the cinema and was always full of men in brightly coloured sports shirts, shouting at the TV and drinking pints of lager. I usually avoided it. “So you thought you’d grab yourself a bit of gay before going home.”

He laughed, his white teeth flashed. “No, nothing like that. I’m not on the pull. I just wanted to be. Without having to think about where I was.”

I looked him up and down. “Wouldn’t think you’d have too much problem blending in those places.”

Little did he know. I smiled, handed over my money as my drinks had arrived. “Still, better get back. My friends’ll be wondering what’s happened to me.” I started to leave.

He put his hand on my shoulder. “Wait until my drink’s here, eh? Keep me company a bit longer. I was enjoying talking to you.”

Is he really? Or is that just a line. “Five minutes.” I put the drinks back on the bar and sipped mine. I peered through the crowd to try and catch a glimpse of Tony’s lopsided black haircut but couldn’t see anything.

I rolled my eyes, internally, at his wonderfully original question and told him about TK Max and some singing work too, leaving out the dressing up part.

“I love coming here for the cabaret. That’s why I came here. Needed something to balance all the sport in the other pub. I hoped there’d be one of the drag acts on. I enjoy them. The put-downs, the songs. I’m a fan of it all.” He leant forward and whispered, like he was going to say something illegal. “It’s a bit of a guilty pleasure of mine as it goes. Do you like all that stuff?”

I smelt his aftershave. A sweet musky scent. His cheek had brushed against my ear as he’d whispered to me. The finest dusting of a weekend beard grazed my ear. Maybe I’ll stay with him just another five minutes, just until I’m a third through my drink. “Funny you should say that, I do actually. You know the singing I told you about?”

He nodded, accepting his drink and paying, taking a sip and listening to me as I told him about the Plan, and performing at that pub, and others in I’d visited on the circuit.

He asked me how I’d got into it, and how did I know I could perform.

“I’ve been performing all my life really,” I said with a smile. “Always loved karaoke, so singing on stage was pretty obvious for me.”

He chinked his now almost empty glass against mine, which was almost finished too. 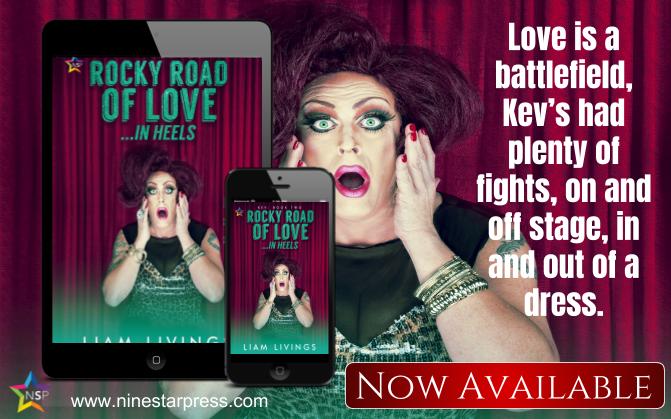