Release Blitz: Checked Baggage by Valentine Wheeler AND A Touch of a Brogue by Christine Danse

A Thanksgiving Romance When Faris has to take a trip back to his family’s home in Lebanon to handle his grandmother’s estate, he finds himself caught between the world he left and the world he’s built himself in the United States.

After an exhausting stay with his boisterous extended family, all he wants is a quiet trip home and a chance to rest before Thanksgiving with his parents in Massachusetts. But the weather has different plans for him. Charlie’s father left when he was a toddler, and he’s never gotten a chance to connect with his paternal roots.

A trip to the village his grandparents left in the 1930s gave him the facts but left him yearning for a connection he still didn’t feel. When both men are stuck in Beirut for the night unexpectedly, can they find the feeling they’re both missing and make it home in time for Thanksgiving?

Valentine is a latecomer to writing, though she’s always been a passionate reader. Through fanfiction she found her way to an incredible community of writers who’ve taught her to love making stories. When she isn’t writing, she’s making bad puns, yelling about television, or playing with her small child. Her life’s ambition is to eat the cuisine of every single country. Find Valentine on Twitter. 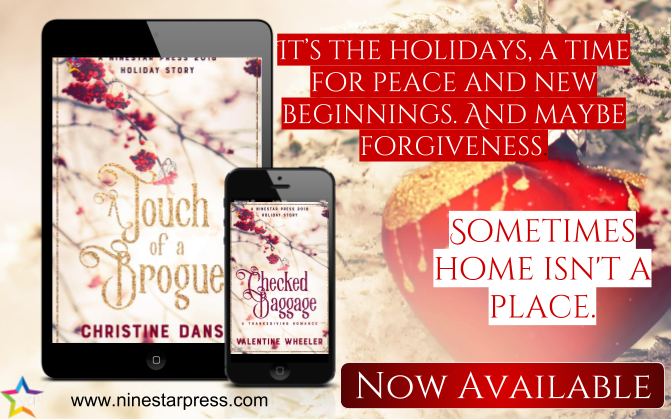 Title: A Touch of a Brogue

Eric Rossi isn’t a bad person. But he’s been talked into doing some pretty regrettable things by the man he thought he loved–like write a fake review of a pub he never stepped foot in for a food magazine that makes or breaks restaurants in Portland. He’s since dumped the boyfriend, but he can’t undo the review or the damage it’s done to the Irish Sisters and its passionate owner, Colm.

When Colm paid to have his family pub shipped from Ireland to Oregon, he put his savings, his heritage, and his sanity on the line. Now he gets so few customers, he notices each one. Especially the sweet, shy man who is dragged into the pub by his pink-haired niece. He calls himself Mark, and he is a chef’s dream, a man who completely enjoys everything Colm cooks. What Colm doesn’t know is that the man he’s falling for is the critic who’s almost cost him everything.

Eric didn’t mean to fall in love with the Irish Sisters or its blue-eyed, Irish-American owner. He definitely didn’t mean to lie about his identity. He’s already done enough damage, after all. Now he must make things right for the restaurant and disappear from Colm’s life before Colm learns the devastating truth, because the last thing Eric wants to do is destroy the chef’s heart, too.

Christine lives with her writing partner in the wilds of urban Oregon, where they raise weeds, worms, and eyebrows.