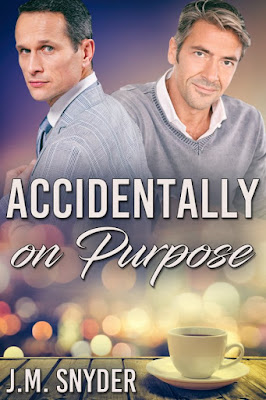 One morning before work, Alan Travers accidentally bumps into Detective Jim Garrison at a cafe where both men stop for coffee. The handsome younger man interests Alan, but he misses his chance to get to know the detective better and wonders if he'll get another.

With the help of his nephew Brooks, Alan concocts a plan to try and get Jim's attention "accidentally on purpose." It works, but as things heat up between them, Alan worries what Jim will think if he finds out their getting together was no accident.

Then Brooks goes missing, and Alan's going to have to come clean. But is he the only one not being truthful?


Standing on his porch is Detective Jim Garrison with the Richmond police. Dressed in a navy suit and tie, Garrison is a good decade younger than Alan and it shows. He’s sternly handsome, with a wide jaw and smooth, clean-shaven cheeks. His thin lips have a natural redness to them Alan wants to taste. He wears his thick brown hair short, combing the length on top to the left. He tilts his head that way, too, as if afraid to ruin the part. His dark bedroom eyes soften when he sees Alan.

“Detective.” Alan wonders if his own voice sounds as high out loud as it does in his head. Clearing his throat, he adds, “Nice to see you again.”

Understatement of the year.

“Well,” Garrison drawls, “you might change your mind when you find out the reason why I’m here.”

Alan presses his lips together to keep from grinning. “Oh no. Don’t tell me it’s Brooks again?”

“You are aware there’s a curfew for anyone under eighteen?”


Of course he does. Garrison knows he does. The detective has been here for the same reason before. More than once.

“I know, I do,” Alan says. “But I didn’t know he wasn’t here, honest. The last I heard from him, he turned in around nine. Long day, you know. He was out at the high school football game earlier. Here I thought he was upstairs sleeping this whole time.”

Garrison narrows his eyes, and for a moment, Alan wonders if the jig is up. Then the detective lets out a weary sigh. “Yeah, well, he wasn’t.”

“Where’s he now?” Alan leans closer, pretending to look out at Garrison’s unmarked car but really trying to catch a whiff of the detective’s cologne. Calvin Klein’s Eternity, if he isn’t mistaken. Light, sexy, and seductive. He’d love to wake up with that scent on his pillows.

Well, that isn’t exactly true. He is here to see Alan, but only about Brooks being out after curfew, again. Even if he does smell damn delicious.

“In the car,” Garrison says. “Front seat, don’t worry. He isn’t under arrest.”

“Maybe he should be,” Alan mutters. This time he allows himself a quick smile to show he’s only kidding. Mostly. “Didn’t he want to get out?”

Garrison turns now, too. The driver’s side window is down, and through it Alan can almost see the long black sleeve of the hoodie Brooks likes to wear. A faint light flickers inside the vehicle; Brooks on his cell phone, texting someone or playing one of his games.

Alan leans out a little more, crossing his arms in front of his chest. The night’s chilly this late. Ducking down, he can see farther into the car, and for one brief instant, Brooks glances his way. Alan raises his voice so it carries easily across the yard. “Coming in sometime tonight then, son?”

Brooks’s dramatic sigh can be heard all the way to the porch. The phone’s light goes out; a moment later, the passenger side door opens and Brooks doesn’t step so much as fling himself out of the vehicle. Angrily the door slams shut behind him.

In a low voice only Garrison can hear, Alan murmurs, “Someone has an attitude.”

“It could be worse,” Garrison suggests.

Alan looks at the detective, who’s watching Brooks approach and can’t see the naked want Alan knows has to be written all over his face. God, this man. So close Alan could reach out and touch him, if he dared. Careful, mate, he warns himself. Don’t go scaring him away just because you’re too damn eager.
Fighting against everything in him that wants Jim Garrison, Alan tries to keep his voice steady as he asks, “How, exactly?”

Garrison shrugs, and in the gesture, Alan sees a friendliness that makes his heart sing. It’s almost familiar, as if they might be more to each other than what it looks like tonight. Garrison raises his voice a little, so Brooks can overhear. “He isn’t into drugs or alcohol or fighting. You should see some of the riff raff I have to deal with some nights.”

Brooks has closed the distance between the car and house, and now he stomps up the porch steps with exaggerated force. His pale skin stands out against his black hoodie and jeans; even his hair is black, so dark it looks almost blue under the porch light.

“He just likes to run off at all hours.” Alan reaches out and ruffles that thick, inky hair, getting in a good rub before Brooks ducks out of reach. “You’re lucky you aren’t old enough to spend the night in jail.”

Brooks glares at Alan from under his dark fringe. “If I were older, I wouldn’t be picked up for breaking curfew,” he mutters. “I don’t even know why it matters anyway. It’s Friday. I don’t have to get up early for school tomorrow.”

“Curfew’s the same every night,” Garrison says, “school or not. You know that by now. How many times have I picked you up after eleven?”

Brooks doesn’t answer, just shoves his hands in his pockets and scuffs his shoe as he frowns at the floor.

Brooks mumbles something under his breath.

“What’s that?” Leaning out the door, Alan cups a hand around his ear. “Speak up, son. I’m a little hard of hearing.”

Alan can’t leave it alone. “Are you going to stay in there this time, then?”

With an aggravated sigh, Brooks pushes past Alan into the house. He storms upstairs, stomping with more force than before, if that’s possible.

Alan shares an amused smile with Garrison. “He’ll tear the house down if he isn’t careful. Thanks again for bringing him in.”

Then, to Alan’s surprise, Garrison doesn’t make any move to leave.

Am I reading this right? Alan barely dares to hope. 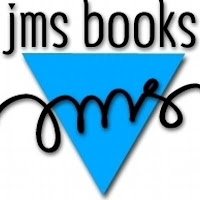