Renewing Forever is the second of a series of standalone novels focused on older characters who think love has passed them by. Frank and Tom's story is a true second chance romance, reuniting childhood friends and first loves separated by an argument and thirty years of misunderstanding. I hope you enjoy reading about their renewed friendship and their plans for forever. 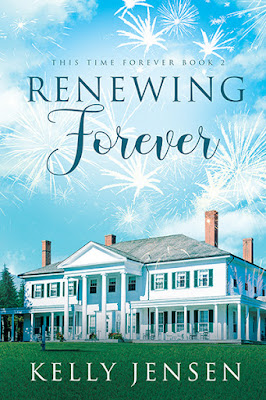 A neglected resort, a lost chance at love, and one last chance to renew forever.

Frankie and Tommy once dreamed of traveling the world together. But when seventeen-year-old Frank kissed Tom, their plans ended with a punch to the jaw and Frank leaving town without looking back.

Thirty years later, Frank’s successful career as a journalist is interrupted by his uncle’s death and the question of his inheritance—the family resort where his childhood dreams were built. When he returns to the Pocono Mountains, however, he finds a dilapidated lodge and Tommy, the boy he never forgot.

Tom’s been keeping the resort together with spit and glue while caring for Frank’s uncle, Robert—a man he considered father, mentor, and friend—and his aged mother, who he refuses to leave behind. Now Robert is gone, taking Tom’s job with him. And Frank is on the doorstep, wanting to know why Tom is still there and why the old lodge is falling apart.

But before they can rebuild the resort, they’ll have to rebuild their friendship. Only then can they renew the forever they planned all those years ago.

The Careers I Could Have Had
This edition of “The Careers I Could Have Had” has a happier ending than last time. To recap: in relation to Building Forever, the first book in my series, This Time Forever, I talked about how a sixth grade teacher squashed my dreams of being an architect. I actually went on to study Graphic Design.
After college, I worked as a finished artist and copy writer. I’ve also worked a lot of part time jobs in admin and marketing. And food service. We all do food service at some point, don’t we? Eventually, I got in to teaching, and I’ll talk about that in the third edition of this post! For now, though, I’ll talk about how I actually got into fiction writing.
Nearly fifteen years ago I signed up for a correspondence course. I indicated a strong interest in writing fiction—speculative fiction in particular. My tutor, however, steered me toward journalism, stating that there was no money to be made in fiction. As I quite liked the idea of learning to write articles and editorial pieces, and figured I could continue writing my short stories on the side, I agreed. To my surprise, I really enjoyed the course, and was published in several magazines by the time I graduated, with my first article returning a paycheck large enough to by myself a really nice laptop to dedicate to my new career. I also enjoyed the research, and the art of finding just the right angle for each piece. What I didn’t enjoy as time went on, though, was selling myself.
I switched to fiction and I still have to sell myself, but it’s a different market. It’s slower, and in some ways more forgiving. While journalism is very much representative of the present moment, fiction can be more reminiscent. And strange. So, for me, being able to transition to fiction writing meant I was finally able to pursue a dream.
When it comes to selling his self and his vision, Frank is a natural. Although he’s actually quite shy, Frank has a warm and inviting manner. He can laugh at himself, and often does, and has the knack of being able to make anyone feel like the absolute center of his attention. He’s also naturally curious, and has the focus required to hone his craft. As a journalist, he’s a success. More importantly, he enjoys what he does.
At the beginning of Renewing Forever, though, Frank is beset by a feeling of inertia. He no longer enjoys what he does as much as he used to. It’s not because he’s bored, though. More, it’s that he’s lost some of his perspective. His career has drifted sideways and he’s not interested in continuing to pursue that exact trajectory. He wants to return to the beginning—to the type of journalism that made his name and his career. Finding Tom, reconnecting with him, and exploring the options for the family resort will help him do just that.


Frank’s personal story in Renewing Forever has a gentler arc than Tom’s. He’s suffered just as much heartache and regret. But what I loved about his journey in this book was how much of it was reflected in the proposed restoration of the resort.
In other careers I might have had but decided against pursuing is photography. I still enjoy it, but I don’t have the proper ‘disconnect’ for it. My father, however, is a keen photographer and I actually based a substantial portion of Tom’s character on him: the way he sees the world and interacts with it; his faults—perceived and observed; and that unique frame of reference that all good photographers seem to have—the way in which they look at the world.
Frank uses his skills as a journalist to maintain distance between himself and others. He is the interviewer; everyone else is the interviewee. He sees himself as the pencil, or type, and everyone else as the story.
Photography works the same way for Tom. He is the camera. He’s a static object through which the world can be viewed. The scenery can be altered by exposure time and filters, but not change in any essential way. Tom doesn’t intentionally leave a footprint. He’s not in any of his photos. Tom exists as part of the world, but is also apart from it.
What Tom fails to understand, however, is something only Frank is qualified to point out: Tom actually has a substantial impact on the lives of others. His image is a permanent mark on the retina of Frank’s heart. More than that, though, his success as a photographer does have an effect on people’s lives. In every wedding, he captures the moment that makes that day special for the happy couple. That’s why he keeps getting business. In every landscape, he captures the essence of his subject in such a way that the viewer is transported there.
Tom is a lens. Through him, Frank will come to appreciate not only what he left behind, but what his future might be. And because of that, Frank will be able to help Tom step out from behind the camera and actually engage, for his own sake.
I hope you enjoy meeting Frank and Tom and agree that their chosen professions are very well suited to them, and that as a team—personally and professionally—they really are the complete package.

If aliens ever do land on Earth, Kelly will not be prepared, despite having read over a hundred stories about the apocalypse. Still, she will pack her precious books into a box and carry them with her as she strives to survive. It’s what bibliophiles do. Kelly is the author of a number of novels, novellas, and short stories, including the Chaos Station series, cowritten with Jenn Burke. Some of what she writes is speculative in nature, but mostly it’s just about a guy losing his socks and/or burning dinner. Because life isn’t all conquering aliens and mountain peaks. Sometimes finding a happy ever after is all the adventure we need.


To celebrate the release of Renewing Forever one lucky person will win a $25 Riptide Publishing gift card and a swag pack of stickers, art cards, and bookmarks! Leave a comment with your contact info to enter the contest. Entries close at midnight, Eastern time, on November 17, 2018. Contest is NOT restricted to U.S. entries. Thanks for following along, and don’t forget to leave your contact info!