Book 2 in the Supernatural Selection series


Hello and welcome to the blog tour for Vampire With Benefits! I can’t wait for you to meet Rusty and Cas, the second mismatched couple in my Supernatural Selection series (part of the Mythmatched universe). Thank you to all of you and to this blog for helping me celebrate the book release! 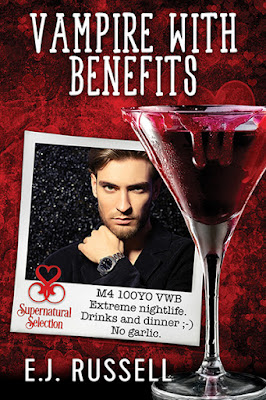 A match between a vampire and shifter could be deadly—but this broken beaver doesn’t give a dam.

Silent film actor Casimir Moreau had imagined that life as a vampire would be freewheeling and glamorous. Instead, he’s plunged into a restrictive society whose rules he runs afoul of at every turn. To “rehabilitate” him, the vampire council orders him mated to an incubus with impeccable breeding who’ll mold Cas into the upstanding vampire he ought to be. Or else.

As an inactive beaver shifter, construction engineer Rusty Johnson has fought—and overcome—bias and disrespect his entire life. But when his longtime boyfriend leaves him for political reasons, Rusty is ready to call it a day. Next stop? Supernatural Selection and his guaranteed perfect mate, a bear shifter living far away from Rusty’s disapproving clan.

But then a spell snafu at Supernatural Selection robs both men of their intended husbands. Rusty can’t face returning to his clan, and Cas needs somebody on his arm to keep the council happy, so they agree to pretend to be married. Nobody needs to know their relationship is fake—especially since it’s starting to feel suspiciously like the real thing.

Are you a shifter who’s lost faith in fated mates? A vampire seeking a Second Life companion? Or perhaps you’re a demon yearning to claim a soul (mate)?

Congratulations! Your search is over!


A Vampire's World - Part 2
(Get Part 1 of A Vampire’s World at Joyfully Jay.)
So…this is going to be a little grim, but you know, vampires. So I hope you’ll bear with me.
In an earlier post on the tour, I talked about the basic underpinnings of my take on vampire society for the purposes of the Mythmatched story universe—how and why the vampires emigrated to America from Eastern Europe and why there aren’t many of them left.
But what happened once the vampires arrived in America? Did they docilely submit to the rules imposed on them by their rescuers?
Well, as you might imagine . . . not so much. Here’s what I decided happened.
At the center of the Mythmatched universe is the Secrecy Pact. This pact was entered into by each of the supernatural races: under no circumstances could any of them expose the existence of supe society to humans in a way that jeopardized the safety of all.
Of course, some of the supe races had ways to mitigate exposure: the fae have glamourie, the vampires have mesmer, the ‘cubi have thrall. But when and why did the Secrecy Pact go into effect?
Well, it was the vampires’ fault. But I needed to find a good reason for it to be their fault, so I looked up unsolved murders that had two qualities:

In 1918 and 1919, New Orleans was terrorized by a killer calling himself the Axeman. He attacked twelve people (not all of whom died from their injuries), using . . . well . . . an ax. The attacks were bloody and violent enough, but the Axeman didn’t stop there. A letter purporting to be from him was printed in a local paper. It began like this:
Hell, March 13, 1919
Esteemed Mortal of New Orleans:
They have never caught me and they never will. They have never seen me, for I am invisible, even as the ether that surrounds your earth. I am not a human being, but a spirit and a demon from the hottest hell. I am what you Orleanians and your foolish police call the Axeman.
He goes on to warn Orleanians that he’ll kill again on March 15th, but promises to, er, spare any home with a jazz band playing.
In my story world, the Axeman is a vampire. He betrayed the hospitality of his new country by not only killing for no reason, but for announcing to the world that he wasn’t human. Not only that, but he made a fledgling.
The Axeman wasn’t heard from again after that letter—no attacks occurred on the 15th. In my story world, the fae “took care of him” and the Secrecy Pact was put into effect.
But one vampire still chafed at the restrictions. This one made a fledgling in 1926, which got him put under close scrutiny by the vampire council, although they didn’t take extreme measures until 1947, when a gruesomely spectacular “Black Dahlia” murder occurred in Los Angeles. When the mutilated body of would-be actress Elizabeth Short was discovered, there was no blood at the scene. Later, the killer sent the contents of her purse to an LA paper.
An unsolved murder, missing blood, and interaction with the press: another vampire on an indiscreet rampage. And since all of these things would violate the terms of the vampires’ evacuation agreement with the fae and druids, that vampire got staked by the council for his crimes.
Casimir Moreau, the co-hero in Vampire With Benefits, is the youngest vampire and one of only two American-made vamps. The other, Henryk Skalding, has been Cas’s death-long nemesis. Henryk’s sire (the vampire who made him) is the Axeman.
Cas’s sire is the Black Dahlia’s killer.
Stay tuned—the vampire lore continues with a post about Nosferatu. tomorrow at OMG Reads!

To celebrate the release of Vampire With Benefits one lucky person will win a $25 Riptide Publishing gift card and an ecopy of The Druid Next Door, the second title in the Fae Out of Water series, also from the Mythmatched universe! Leave a comment with your contact info to enter the contest. Entries close at midnight, Eastern time, on October 27, 2018. Contest is NOT restricted to U.S. entries. Thanks for following along, and don’t forget to leave your contact info!