Characters
Thank you for having me on the blog today.
Hi, everyone! Jesi Lea Ryan here. I’m so excited to introduce you to my new novel, Surreal Estate. These characters hold such a special place in my heart, and I can’t wait to for you to get to know them too.
People ask me all the time how I come up with my characters. For this book, Sasha popped into my head more-or-less fully formed. I knew I wanted to write about a homeless person, since there is a disproportionate number of LGBT homeless, but I didn’t want to have him tossed out of his family because of his homosexuality. I have read several books that cover those issues before. I also didn’t want to make him an addict or a sex worker. Those stories are very important, but I don’t think I’m the one to tell them. Instead, I decided to turn the addiction trope on its head and have his mother be the addict who kicks him out of the house.
Sasha is introverted, thoughtful, talented and resourceful. He knows how to hustle when he has too. Before he discovers the vacant home at the center of the story, he earns food money by busking on street corners with his guitar and taking part-time jobs in coffee shops. All of this matures him beyond his twenty-four years.
And then, there is Nick.  He‘s more like me than any other character I’ve written. We’re both hard-working, spontaneous, optimistic, and willing to take risks (sometimes unwisely) to achieve our goals. We even have related careers. I don’t build houses like Nick, but I do insure them, which requires me to know a lot about construction and building materials. He’s not a Mary Sue for me though. I only borrowed some of my personal traits when finding his voice.
It was important to me when writing Nick that I wasn’t falling into a “gay for you” trope. (That’s not to say it’s impossible for a person to only find one person of the opposite sex attractive. Who am I to judge?) I view sexuality as a spectrum, and I wanted to write a story of a person discovering their bisexuality for the first time. Nick is a straight-leaning bisexual, but that does not make his feeling for Sasha any less real. Nick had been attracted to men before, even though he had never acted on those feelings. Part of what makes his relationship with Sasha special is that he is discovering a part of himself at the same time he is falling in love.
Of course, Sasha and Nick don’t exist in a bubble. When writing secondary characters, it is just as important to understand them and their motivations, even if they don’t make it into this story. Nick’s brother Steven is one that I would like to write a book about in the future, so it was important to me that I flesh him out well. Steven is very different from Nick, and while they tend to butt heads  a lot, it’s obviously they love each other. I needed to ride a balance of pitting him against Nick while also making him sympathetic to the readers.
The villain of the book is Frank Diamond. I heard a long time ago that the key to writing a good villain is to make them the hero of their own story. This makes giving them a well-thought out motivation key. Frank is motivated my money, sure, but he also thinks he is helping people him his own way. People turn to him when they are financially stuck. When no bank will help them out of their predicaments. He sees his loan sharking as a service to those who are out of other options. And why shouldn’t he make hefty interest in exchange. When all goes according to plan, his clients get when they need, and he gets rich. When it doesn’t go his way, well, that’s just business.
I love these characters, and I hope you will too.
Surreal Estate releases on November 5,2018. 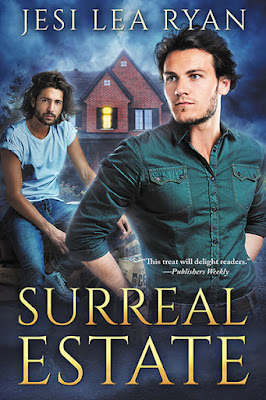 Sasha Michaels is a psychic with an affinity for houses. And he’s homeless. Go figure. After months of sleeping rough, he stumbles upon an abandoned house, and the lonely place beckons him inside. He’s finally safe . . . until someone comes blundering in to his hideaway.


USA Today bestselling author Jesi Lea Ryan grew up in the Mississippi River town of Dubuque, Iowa. She holds Bachelor's degrees in creative writing and literature and a Master's in business administration, along with an assortment of Associate's degrees, certificates and designations, none of which have anything to do with writing books about psychics.

Jesi considers herself a well-rounded nerd. She loves studying British history, exploring foreign cities on Google Earth, watching TED talks, listening to true crime podcasts, floating in her pool, and reading or listening to books — approximately two hundred books a year in many different genres. The side effect of all this is that she’s the ideal person to have on your trivia team, or what a former co-worker called “a dump truck of knowledge.

Her biggest vice is procrastination. #TheStruggleIsReal

Jesi spent most of her adult life in Madison, Wisconsin, but now lives in Maricopa, Arizona, with her spouse and two exceptionally naughty kitties. Summers may be brutal, but at least she doesn't have to shovel the heat off her driveway.

To celebrate the release of Surreal Estate, one lucky person will win a $20 Riptide gift card! Leave a comment with your contact info to enter the contest. Entries close at midnight, Eastern time, on November 10, 2018. Contest is NOT restricted to U.S. entries. Thanks for following along, and don’t forget to leave your contact info!