Blogtour: Stoker & Bash #2 - The Fruit of the Poisonous Tree by Selina Kray

Hi! I'm Selina Kray, and this is the last stop on the blog tour celebrating the release of Stoker and Bash: The Fruit of the Poisonous Tree. A huge thanks to everyone at My Fiction Nook for hosting me today!

Greetings, friends! We've tackled some serious subjects on this blog tour, so I thought the last post should be something fun. I don't know about you, but whenever I read/watch/listen to something amazing, and then finish that thing, I immediately want something that evokes the same kind of emotion or mood, to make the feeling last that much longer. I want to cocoon in the world I've just experienced.

On my website, I occasionally do a feature called Five Things I'm Loving Right Now. Here are Four Things that Inspired The Fruit of the Poisonous Tree. A short list of things to keep that feeling going after—hint, hint—you've read Stoker and Bash #2. Hope you enjoy them as much as I did.

A Gothic romance featuring two strong female protagonists, a melancholy hero with a mysterious past, and the grandest, creepiest house ever put to film. (There is a hole in the roof. Like, permanently.) All from the magical mind of Guillermo del Toro.

If you, like me, have a mild obsession with cults, Gwenda and Cher have your weekly fix of "Why do perfectly sane people fall for these things?" and other deep-cut questions about cults both famous and obscure.

Marisha Pessl writes like no one else. This is her debut novel, about a girl named Blue trying to get in with the coolest kids in school and win the approval of her femme fatale teacher, who comes to a deadly end. Part noir murder mystery, part coming of age novel, part Orphean journey into a dark high school underworld, the ending will shock the socks off you.

To Bring You My Love, PJ Harvey

One of my all-time favorite albums, and one I listened to constantly while writing this. Full of heartache and vibrant feeling, she takes classic musical tropes and gives them a feminist spin. Legend has it she played her guitar with a chainsaw for one track. The epigraph for S and B #2 is from her song "Snake", which is basically the book's theme song.

I hope that's put you in the mood for some dark and sexy shenanigans in the lush garden owned by the Daughters of Eden, the cult at the heart of The Fruit of the Poisonous Tree. Enjoy! 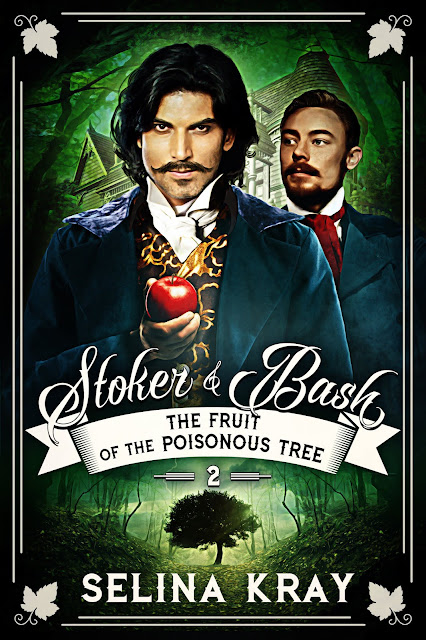 When will She open Rebecca Northcote’s box?

Finding lost poodles and retrieving stolen baubles is not how DI Tim Stoker envisioned his partnership with his lover, Hieronymus Bash. So when the police commissioner's son goes missing, he's determined to help, no matter what secrets he has to keep, or from whom.

When a family member is kidnapped, Hiero moves heaven and earth to rescue them. Even if that means infiltrating the Daughters of Eden, a cult of wealthy widows devoted to the teachings of Rebecca Northcote and the mysterious contents of her box. The Daughters' goodwill toward London's fallen women has given them a saintly reputation, but Hiero has a nose for sniffing out a fraud. He will need to draw on some divine inspiration to rattle the pious Daughters.

Like weeds gnarling the roots of Eden's fabled tree, Tim and Hiero's cases intertwine. Serpents, secrets, and echoes from Hiero's past lurk behind every branch. Giving in to temptation could bind them closer together—or sever their partnership forever.

Selina Kray is the nom de plume of an author and English editor. Professionally she has covered all the artsy-fartsy bases, having worked in a bookstore, at a cinema, in children’s television, and in television distribution, up to her latest incarnation as a subtitle editor and grammar nerd (though she may have always been a grammar nerd). A self-proclaimed geek and pop culture junkie who sometimes manages to pry herself away from the review sites and gossip blogs to write fiction of her own, she is a voracious consumer of art with both a capital and lowercase A.

If you’re interested in receiving Selina’s newsletter and being the first to know when new books are released, plus getting sneak peeks at upcoming novels, please sign up at her website: www.selinakray.net