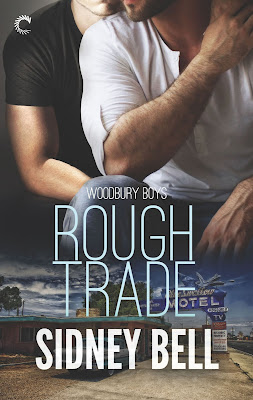 Quick-witted hustler Ghost is no stranger to living dangerously; survival has always been the name of the game.

Now he’s got the wrong people breathing down his neck, and the only way out demands placing his trust in the unlikeliest of heroes: Duncan Rook, a gruff cop whose ethics are as solid as his body.

Cozying up to a criminal is hardly what Duncan’s reputation on the force needs—especially when that criminal is temptation personified. Ghost is Duncan’s polar opposite, and the last person he expected to fall for.

So then why does every imaginable scenario for taking down their common enemy end with Ghost in his arms?

This book is approximately 122,000 words

He turned around with his jaw set and put both hands on Duncan’s chest. He pushed gently, so gently that Duncan couldn’t interpret it as anything but a question, and a nonthreatening one at that, so he found himself playing along until his back hit the concave wall of the tunnel. The cement seeped cold through his own thin, sweat-dampened T-shirt, making him shiver.
Or maybe it was Ghost nudging at Duncan’s feet with his toes until Duncan widened his stance, making room for Ghost to step closer still, until their thighs brushed, until Ghost’s tilted-up face was only inches away, his breath on Duncan’s lips. Ghost’s hands trembled against him. That small vulnerability made Duncan hurt deep in his belly, hot and sweet and aching.
“What are you doing?” Duncan whispered.

“You asked why.” Ghost cupped the back of his skull, trying to coax him to lower his head, and Duncan stupidly, stupidly, went along with it. Ghost’s mouth, when it pressed against Duncan’s, was dry and tentative and awkward.
He should move. He should push Ghost away. It was an act. It was bullshit. At the very least, it was manipulation. It had to be. He should run for his life and sanity and soul, but he couldn’t. He was stuck in place by nothing more than two hands resting on his sternum and the slow realization that this was Ghost kissing him, not the sly seducer, not the innocent victim, not the wry pal up for a convenient good time. This wasn’t the empty distance of disconnection that Ghost had given him before when he’d gone doll-still and creepy. It wasn’t the confident, knowing, arousing seduction of the kisses that had preceded Ghost’s fugue that last time, either.
This was new and uncertain and heavy. It reminded Duncan somehow of climbing down the outside of the parking garage, the terror of looking at a long drop and a messy landing if he couldn’t figure out what he was doing.
It was the waiting, maybe, that made it so overwhelming. He’d been waiting for this all along, wanting this all along. He’d tried not to think about it, but it’d been there, and now that Ghost was here and it was happening, he felt strung tight as a rubber band, on the verge of snapping, because this tiny, tentative, closemouthed kiss, was a cup of cool water after a day in a desert, enough to tempt, but not nearly enough to sate.

Sidney Bell lives in Colorado with her amazingly supportive husband. She received her MFA degree in Creative Writing in 2010, considered aiming for the Great American Novel, and then promptly started writing fanfiction instead. More realistic grown-ups eventually convinced her to try writing something more fiscally responsible, though, which is how we ended up here. When she’s not writing, she’s playing violent video games, yelling at the television during hockey games, or supporting her local library by turning books in late.