You’ll find the relevant info on the story below, but here’s the short version: This is the love story of a surly private detective and a sultry burlesque starlet with a big secret who both end up in even bigger trouble and an amazing adventure.

Today I’m a guest here at My Fiction Nook—thank you kindly, Sandra, for having me—to talk about one of the themes in the story. And that theme is… burlesque. Yes, though this is a contemporary gay love story with male main characters, it features burlesque. And yes, there’s an exclusive excerpt below.

Many years ago, in my twenties, I happened to catch a burlesque show, which are a rarity in home country of Finland. It was spectacular and beautiful and fun. I’d never quite understood how a girl could be a “doll,” but I did after that night.

Later, as I became a writer, I began to wonder what would happen if a man entered this female-dominated field of self-expression. This story, Femme Faux Fatale, is the result of that thought experiment.

Here’s a bit of back history for the phenomenon. I hope I won’t bore you too much.

With the term burlesque, I mean a type of cabaret involving dancing and striptease. Back in the day, you see, burlesque was mainly a comedic mockery of more serious works, such as theatrical drama or solemn musicals. It was a parody full of caricatures and extravagant showmanship.

Later, in the late 19th and early 20th centuries, burlesque began to mean Victorian variety shows with bawdy numbers, female striptease, and male comedy acts. These were theatrical shows with comedic elements but adding more risqué themes. The female artists known as soubrettes started out being equal parts singer, dancer, and stripper. Later the singing went away in favor of semi-clad girls whose main task to strip virtually or entirely bare.

In the U.S., closer to contemporary times, American burlesque experienced a revival and evolved into modern neo-burlesque. New themes, such as female empowerment, took center stage, and I think that’s grand. While the traditional striptease acts were still a big part of the show, comedy plays, modern dance numbers, even circus-type acrobatics have been added to the mix.

One could say these days burlesque has become mainstream and is largely accepted by the wider public. Everyone knows famous movies like Cabaret or recognizes the pop icon Dita Von Teese. And that, I believe, spells a bright future for burlesque.

My story, however, is about boylesque. A young man who does modern burlesque. Add a grumpy private dick, scheming Hollywood royalty, and a crime of the century, and you get… Femme Faux Fatale.

Once again, thank you, Sandra and My Fiction Nook, for having me here today. And, as promised, below is a short exclusive excerpt from the book. Enjoy! 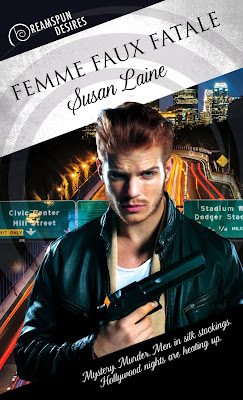 Hardboiled Los Angeles PI Cain Noble is hired by wealthy and gorgeous Camille Astor to find her husband and a priceless work of art, both of which have disappeared.


At the nightclub owned by Mr. Astor, Cain encounters the mesmerizing Lily Lavender, who has the body of a goddess and the sultry voice of an angel—but is really a young man named Riley who attracts trouble like a magnet.

What’s a private dick in the vein of LA’s bygone era and a cross-dressing burlesque starlet to do when faced with the hidden decadence and lethal dangers of the Hollywood Hills? They have their work cut out for them because they haven’t even scratched the surface of an elaborate scheme more twisted than anyone could ever have imagined.

Glam Vamp trotted along the stage like a prancing peacock, singing with a potent voice that left nothing to the imagination. It was blunt and brutal, a kick in the groin, a hit on the head, a knife in the chest. This seductress was an assassin of the night, ever ready to hold your heart in her hand, only to squeeze the life out of it and leave you bloodied and bruised on the floor, broken and rejected and useless. A piece of trash discarded.
Cain was aware women wore masks, one for each man they knew. It was in their nature to always keep a secret and hold back a piece of themselves, never willing to yield all of their true being to another. Absolutely nothing wrong with that. In fact, it seemed like a sound approach to any given situation and person.

This creature strutting onstage was a stalking tigress. She must have possessed opposing facets, like flip sides of a coin, her personality splintered between a reserved lady and a lewd vixen.

Her formal education revolves around anthropology, but her hope is to be a full-time writer. Susan enjoys hanging out with her sister and friends in movie theaters and bookstores. Her other pastimes include walking, swimming, and fantasizing about sizzling hot manlove. Some of her likes are pop music, chocolate, and doing the dishes, and a few dislikes are sweating hot summer days, tobacco smoke, and purposeful prejudice.