I'm enjoying this blog tour that Dreamspinner Press set up for my book Fair Isn't Life, and I appreciate the welcome from My Fiction Nook.
In a previous post, I introduced readers to Luke, one of my two main characters. Now I want to let people get to know the other guy— Mason— with an exclusive excerpt from his POV in the story.


Mason's 20, proudly out and gay, attending university in Minneapolis. He likes his eyes lined, his hair long, his lips glossed, and his clarinet in tune, although music is just a hobby for him. Mason left his hometown and took to the big-city University of Minnesota, like a duck takes to… less than calm waters. There are many good things about the U for Mason, but he hasn't yet found his solid ground. Seeing his high school crush, Luke, picking up trash at the Minnesota State Fair, reminds him that some good things may have gotten lost in his move to the Twin Cities. And Mason's never been one to let the grass grow under his feet, so he's about to try to change that. 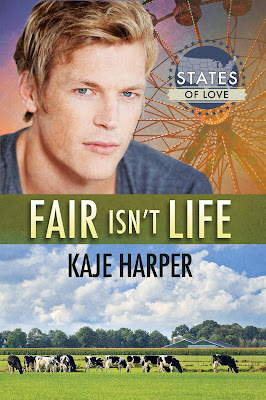 Luke Lafontaine survived the past year by not thinking about the father he lost, the dairy farm he couldn’t save from bankruptcy, or his way of life that vanished with the rap of an auctioneer’s hammer. Cleaning up city folks’ trash at the Minnesota State Fair is just another dead-end job. But at the Fair, surrounded by a celebration of farm life, ambitions he’d given up on and buried deep start to revive. And seeing Mason Bell in the parade—gorgeous, gay, out-of-his-league Mason—stirs other buried dreams.

Mason left his hometown for college in Minneapolis without looking back. Student life is fun, classes are great, gay guys are easy to find, but it’s all a bit superficial. He’s at the State Fair parade route with his band when he realizes a scruffy maintenance worker is Luke, his secret high school crush. Luke should be safely home working on his dad’s farm, not picking up litter. Mason wishes he hadn’t fallen out of touch. He’s an optimist, though, and it’s never too late for second chances. Now he just has to convince Luke.


One of Mason’s perks for being included in the State Fair parade—thank you, Dr. Tristan’s connections—was free admission. After they'd finished marching and the instruments had been safely stowed away, they’d traded heatstroke-inducing jackets and bibbers for T-shirts and shorts, and spent six hours blowing their cash on food, rides, and vaguely phallic balloons for sword-fighting. Mason had convinced the gang to go back to the haunted house twice, but he’d never caught sight of Luke.
Which was why he was back buying a general admission ticket the next day. He could’ve pretended it was because he hadn’t eaten enough foods on a stick, or because Mindy had shot down checking out the fancy chickens. Weird poultry were always cool; she didn’t know what she was missing. But he liked to think he didn’t tell lies, at least to himself.
He wanted to see Luke again.
They’d had a weird almost-friendship in high school, based on math tutoring and baseball. He’d even spent time at Luke’s farm for tutoring sessions, and they’d played a little Path of Exile. Luke was a good guy, quiet and slow-moving but not stupid. Big as a barn, which wasn’t a bad thing in Mason’s book. Behind in his classes—yeah, to where he’d been held back a grade at some point—and sometimes off in his own head, which was why he got teased for being dumb, but Mason had seen different. People like Arnie hadn’t known the real Luke. He was just really hard to read.
His house had a Bible cross-stitch in the entry and a picture of Jesus in the bathroom. (Because who doesn’t want the Lord watching them take a shit?) His dad was even bigger and gruffer than Luke was. Luke wore ugly clothes, and yeah, maybe he was buying secondhand, but Ragstock had cheap and not-ugly, if a guy cared how he looked. Yet he hadn’t blinked an eye at being assigned one of the gayest guys in his class as a tutor.
A few times, Mason had imagined Luke’s rare smiles might mean something besides pleasure at finally learning how to factor an equation. He hadn’t dared ask because coming on to a probably straight guy the size of a bear was a bad idea. But he also hadn’t realized how much unresolved curiosity he’d pushed aside until he saw Luke again and his whole body and brain went huh, I wonder?
The haunted house zone where he’d seen Luke was near the gates. He headed there first. The Sunday crowd was even bigger and a bit rushier, either because the day was cooler, praise all the gods, or because people knew they only had one more chance to eat forty-one foods on a stick. Mason stepped off the sidewalk onto a patch of beat-up grass and debated strategy.
He could stand still in the place where Luke had appeared yesterday and hope Luke had a set routine. Or he could wander the area and let fate take its course. Mason had never been a standing-still kind of person. Wandering, definitely.
Two hours later he was about ready to give up when he spotted a pair of wide shoulders bent over a trash barrel. Mason jogged across the street, managing not to be hit by the trolley. “Hey! Luke!”
Luke whirled and took a big step back, glaring, hands raised as if to ward him off. It wasn’t the welcome Mason had been picturing.
“What’re you doing here?” Luke’s sharp tone made Mason’s breath stutter.
“I-it’s the Great Minnesota Get-Together. I thought we could get together.” The dumb line spilled out of his mouth, his brain totally forgetting the ten better ideas he’d come up with. “I mean, I thought we could hang out. If you want to.”
“I’m working.”
“Yeah, like, after you’re done.”
“Why?”
“Um.” He ran his fingers through his hair, tugging at it to get his brain back online. “Because I haven’t seen you in a couple years, and we’re friends.”
“Are we? You left, and didn’t look back.”
“Yeah, okay, that’s fair. But I’m trying to fix that.”
“I don’t need fixing.”
“Not fix you.” He sighed. “Look, I realized I’ve missed hanging out with you. I figured this was the best place to find you and see if you wanted to grab a pop and get caught up.”
“Is Arnie here too?”
“Are you kidding? A few hours at practice is all I can stand of Arnie.”
Luke glanced away, walked two steps, and picked up a stray corn dog wrapper. Still not looking at Mason, he dropped it in a bin.
Is that it? Mason decided he hadn’t sprung for gas and a ticket to walk away on a maybe. “I figured we could still be friends. But if you don’t want to, say so. I’m still just as gay, if that makes a difference.” He wasn’t sure where that bit of snark came from.
Luke snorted. “No kidding, Mase. What are you going for, the Cher look?”
Mason flicked his hair back over his shoulder. “I wish. I’d need more eyeshadow and another two feet of hair.”
“Yours is already pretty long. But you’d need higher heels. Does Cher ever wear sneakers?”

He couldn’t hold back a smile, because what straight boy would argue over Cher’s footwear? The idea that maybe he’d been right about Luke after all lit a warmth inside him. “She has to, right? She had a kid. I bet she didn’t chase him around the playground in stilettos.”
The corner of Luke’s mouth twitched. “True. But she probably had a nanny.” They looked at each other in silence; then Luke added, “I really need to get back to work.”
“When do you finish?”
“Six.”
“Can we meet somewhere?”
“I guess.” Luke straightened the badge on his chest. “You still like butterflies?”
“Huh? Yeah.” The butterfly stickers on his locker door had been more of a fuck-you to one of the bullies, but still. He remembers!
“How ’bout the Butterfly House? Six fifteen?”
“I’ll be there.”
“Right.” Luke strode off. But even as Mason was feeling dismissed, Luke glanced back and raised his hand in a tiny wave. The gesture was so quickly aborted Mason thought it might’ve been his imagination. But it totally wasn’t. He stared at Luke’s back as he dodged between fairgoers. Wait till six fifteen. We’ll see if I can’t hold your interest…


* Read the rest of Luke and Mason's story in Fair Isn't Life.

I get asked about my name a lot. It's not something exotic, though. “Kaje” is pronounced just like “cage” – it’s an old nickname. I’ve been writing far longer than I care to admit (*whispers – forty years*), mostly for my own entertainment, usually M/M romance (with added mystery, fantasy, historical, SciFi…) I also have Young Adult short stories (some released under the pen name Kira Harp.)

It was my husband who finally convinced me that after all the years of writing just for fun, I really should submit something, somewhere. My first professionally published book, Life Lessons, came out from MLR Press in May 2011. I now have a good-sized backlist in ebooks and print, both free and professionally published, including Amazon bestseller The Rebuilding Year and Rainbow Award Best Mystery-Thriller Tracefinder: Contact. A complete list with links can be found on my website "Books" page.

I'm always pleased to have readers find me online at: