Howdy all! And welcome to the blog tour for book three of the Blue Unicorn trilogy, THE BURNING MAGUS!
THE BURNING MAGUS is a cyberpunk/fantasy Ocean’s 11. Or it would be if Danny and Rusty had been an orc and an elf, they’d been lovers, and the Bellagio casino had been an evil wizard’s tower.
If you’ve been following the series, BURNING MAGUS brings the whole gang together: JT and Austin, Comet and Buzz, the Blue Unicorn and Roan.
It’s the final book in the series where the heroes get their HEA, the villains their come-uppance, and well… I won’t spoil everything.
For this book tour I’d like to introduce y’all to some of the minor characters in THE BURNING MAGUS and this time around I’d like to introduce you to NICO:
Nicolás Ruiz-Chavez was all of sixteen […] jeans sinfully tight, black, and razor-ripped. His antique biker’s jacket studded and chained, La Calavera Catrina on the back, brilliantly colored.
Nico is a new addition to JT and Austin’s band of thieves. He’s a street-smart elf, a petty thief and a virtual graffiti artist. He’s a runaway who’s lived his life alone on the streets of San Francisco and built up a reputation over the years by virtue of talent and sheer chutzpah.
He had quiet hobbies. He listened to music, volume way down. When the recording part of his vinyl records ended, the needle fell into a repeating groove of hissing and pops. He’d listen to that for ten minutes or more as if that white noise held just as much data as the grooves that preceded it.
Nico is a solo act. He’s suspicious, which is a good defense for a thief to have in this world. But that also makes him difficult to recruit. He won’t have anything to do with JT and Austin, what with their reputations, so it’s up to JT’s apprentice Dante to convince him to join the team.


He and Dante together are just trouble waiting to happen. I hope you enjoy him! 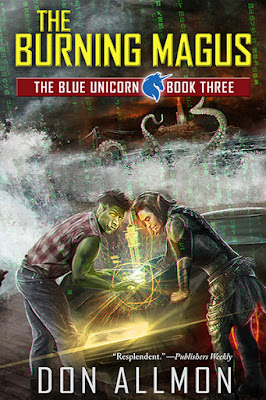 JT was a perfectly happy orc building cars in the Arizona desert until his old friend and sometimes lover Austin showed up and talked him into one last crime. Now “one last crime” has snowballed. With a new team of thieves — a supersoldier, a hacker, a driver, a graffiti artist, and a seafaring wizard — JT and Austin are determined to free an artificial intelligence from the dungeon of the Burning Magus.

For JT, this job is more than a prison break; it’s a do-over of The Job That Went Bad two years ago, the catastrophe in which JT lost his closest friend and then chose to abandon everything, even Austin. Maybe this time no one will die. Maybe this time JT can return to Arizona and bury his old life for good.

Except Austin won’t be buried. After two years alone, Austin knows he wants JT — not just as a partner in crime, but as the lover he always should have been. Maybe this time they won’t make the same mistakes, especially when it comes to each other.

About the Blue Unicorn Universe 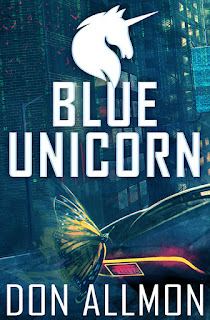 Soon JT’s up to his tusks in trouble, and it ain’t just zombies and Chinese triads threatening to tear his new life apart. Austin wants a second chance with JT — this time as more than just a friend — and even the Blue Unicorn is trying to play matchmaker.

The Blue Unicorn stories can be enjoyed in any order — jump in wherever you'd like!


In his night job, Don Allmon writes science fiction, fantasy, and romance. In his day job, he’s an IT drone. He holds a master of arts in English literature from the University of Kansas and wrote his thesis on the influence of royal hunting culture on medieval werewolf stories. He’s a fan of role-playing games, both video and tabletop. He has lived all over from New York to San Francisco, but currently lives on the prairies of Kansas with many animals.

To celebrate the release of The Burning Magus one lucky person will win a hardback copy of the cookbook BIG GAY ICE CREAM by Bryan Petroff and Douglas Quint!  Leave a comment with your contact info to enter the contest. Entries close at midnight, Eastern time, on November 24, 2018. Contest is NOT restricted to U.S. entries. Thanks for following along, and don’t forget to leave your contact info!

Fun sidenote from the host: I've been to the shop in NYC near Christopher Street, and their ice cream is absolutely fabulous!! Good luck with the contest!