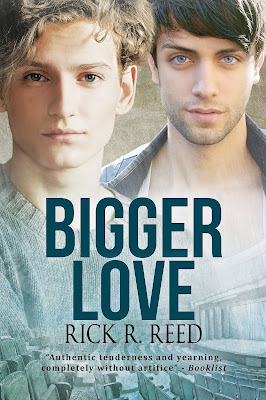 Bigger Love is all about accepting who you are, embracing it, and telling the world, “If you have a problem with who I am, that’s your problem, not mine.”

It’s also about falling in love for the first time—as a teenager, on a school bus.

There was something about the guy that set Truman’s heart to racing, that erased every logical thought from Truman’s mind as all the blood in his body rushed south.

It wasn’t only the fact that he was gorgeous—which he was, with cropped black hair and a five o’clock shadow—but there was something about him that called to the nurturing side of Truman. Even at a glance and from this distance, there was something dark and brooding about him. It set him apart, making him both mysterious and alluring. For just a moment, everything around Truman silenced—the chatter and laughter of the other kids on the bus, the grumble of its engine, the whine of its brakes as it slowed to a stop, and the pneumatic whoosh of the doors opening.

Truman knew, somewhere in the back of his mind, that these sounds should be there, but for one brief, shining moment, all that existed was the boy.

He was at least six feet tall, probably a couple of inches above that. Broad shoulders. Beefy. To use one of Patsy’s terms, he was “strapping.” Unlike Truman he dressed not to attract attention to himself. He wore only a pair of faded Levi’s, a plain white crewneck T-shirt that had seen many washings, and a pair of very basic black canvas tennis shoes. Slung over one shoulder was a battered and faded red backpack.

Mesmerized, Truman watched as he made his way to the bus and then disappeared from view for an instant as he boarded. Truman snapped out of his reverie as he realized Alicia was staring at him as she stood a few people back in line. She stuck her tongue out as their eyes met. Truman chuckled. And he went right back to searching for just one more glimpse of that face.


And then he was on the bus, passing close enough to Truman to touch. Truman swore his heart stopped. Their eyes met, and Truman was nearly bowled over by how crystalline blue they were, bluer than Truman’s own, with an icy paleness from which it was impossible to look away. The lashes fringing those eyes were as black as the hair on his head—which, by the way, contrasted wonderfully with the pale blue—and long enough to cause a twinge of jealousy and desire to flare up in Truman.

Truman swore he felt something pass between him and the boy in that smallest exchange of glances. Something charged. Truman actually felt the downy hair on his neck rise, tingling. He would be hard-pressed to say just what that something was, but he knew for certain that a kind of communication definitely took place.

For the fearful, teased boy who still lived somewhere inside Truman, there was a supposition that the good-looking boy met his glance because he was appalled by what he saw. Through those self-hating eyes, Truman would see a boy dressed all wrong, a boy with makeup who should be ashamed of himself. He wasn’t a real boy. Through that lens, Truman saw disgust.

And it made his blood run cold.

But the other—and ever-growing-even-stronger—part of Truman hoped that what had passed between them was recognition, a kind of kindred-souls thing. Maybe a little interest?

Rick R. Reed draws inspiration from the lives of gay men to craft stories that quicken the heartbeat, engage emotions, and keep the pages turning. Although he dabbles in horror, dark suspense, and comedy, his attention always returns to the power of love.

He’s the award-winning and bestselling author of more than fifty works of published fiction and is forever at work on yet another book. Lambda Literary has called him: “A writer that doesn’t disappoint…”