Blog Tour - Why I... series by Colette Davison

(available individually or in an omnibus edition)

They are a loosely linked series, but can all be read as standalones. 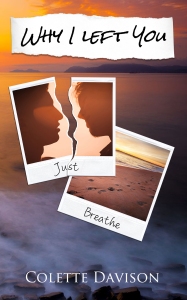 Jamie is struggling with university, money and depression. The last thing he needs is for Brett—the guy who left him four years ago—to walk back into his life. Yet it could be just what he needs.

Ever since Jamie left him, Brett has been running away from commitment. But when he meets Jamie again, he’s forced to re-examine every aspect of his life.

Brett and Jamie are drawn back together by an undeniable spark, but unless they can come to terms with the past, their relationship won’t survive the present.


Following the death of their parents, Fin put his life on hold to raise his little sister. He’s convinced her well-being is all that matters, even if it’s at the expense of his own. A chance meeting with Noah opens his eyes to the possibility of happiness. A happiness that could shatter the moment Noah discovers Fin has an eight-year-old in tow.

Noah has been living a lie for years. When he gets publicly outed, he gets kicked out of his parents’ home and business. Although he’s angry at being disowned, Noah knows it means he’s finally free to love whomever he wants. But in order to have a fulfilling and lasting relationship, Noah has to get past his repressed upbringing and inhibitions, before Fin walks out of his life.

In order to stay together, Fin and Noah have to be brave enough to be honest with themselves and each other.

Why I Trust You


Martin is the larger than life funny guy, the one who’s quick to soothe other’s pain, whilst hiding his own. He wants nothing more than to find ‘the one’, but his love life consists of a string of break-ups. He’s close to giving up on love, until he meets Ryan online, the artist whose work speaks to his soul. There are just two problems: Ryan already has a boyfriend and he lives in California, which is one hell of a long way from England.

Working with Martin to develop a game is supposed to be purely business; a way for Ryan to earn the money to leave his abusive boyfriend. Except, he finds himself falling for the enigmatic Englishman. Wondering what kind of spark there might be if they were in the same country is one thing, escaping his boyfriend is another.

Wounded by their past relationships, Martin and Ryan have to learn to trust each other in order to have a chance at building a future together.

**These stories contain mature language and scenes, including descriptions of sex, depression and domestic abuse**

Why I Trust You


“You’d get drunk faster on spirits,” Brett said, wandering up to him.

Jamie glowered at him and then fixed his gaze on the dance floor. “Thanks for the tip, but I’m good.” He sipped more slowly at the new pint.

Brett didn’t move. “I didn’t think you were into guys anymore.” The question sounded casual, but his body was full of tension as he leaned against the wall beside Jamie.

“What the fuck would you know about it?” Jamie tipped his head back against the wall, closed his eyes and breathed in and out. Just Breathe. “Sorry. I don’t want to fight with you, not tonight.” He pushed his hair back and took a good-sized gulp of his beer. “I just want to hang out and relax. If you’re not gonna help me do that, would you please get lost?”

Brett’s eyes widened. “Help you? How would I be able to help you?”


Jamie shook his head. “Forget it.”

Except he couldn’t get the thought of kissing Brett out of his head, which was totally fucked up. He decided it was the drink talking, stirring up long-forgotten feelings. He glanced at Brett and knew instantly he shouldn’t have done. Brett’s blue eyes seemed more intense under the ultraviolet lighting, almost supernaturally so. They bored into him, trying to understand what he’d just said. And damn if that gaze didn’t make his legs weak and his stomach flip over, the way it always had done when they were younger.

He knocked back the rest of his beer and then put the plastic cup down on the floor beside his feet. He straightened up too fast and swayed. Brett reached out and grabbed him by the shoulders to steady him.

“On second thoughts, I guess you’re already well on the way to being plastered,” Brett said.

Before he had time to regret even thinking about it, Jamie did something stupid. He stepped in to Brett and kissed him.

“I’m staying at a friend’s house for now,” Noah said, trying to inject lightness into his voice. “Martin. He’s cool. You should meet him sometime.”

“Just a friend?” Fin asked, his eyes narrowing ever so slightly. Was that curiosity playing across his face?

“Yes,” Noah said. “We went there once, in high school, but we’re really not into each other. What about you? Have you got a boyfriend?” It was a stupid question, really. They wouldn’t be out together if either of them was involved with someone else.

“Really?” Noah acted surprised. “I can’t believe someone as cute as you is available.”

Fin let out a short laugh. “I’d have thought you’d have been snapped up quickly, too.”

Noah ran his finger around the rim of his pint glass. “I’ve been keeping a low profile. I had to keep up appearances for my parents and all that. Now, I’m free. What’s your excuse?” He was sure he saw panic flit through Fin’s eyes. They certainly darkened for a couple of seconds, his irises becoming almost indistinguishable from his pupils.

“I’ve been too busy, I guess. Too much work and study.”

“You know what they say,” Noah said. “All work and no play makes Fin a dull boy.”

“Not from what I’ve seen. Yet. But you’re in danger of it,” Noah said in a knowing tone. “You should definitely get out more.”

“Oh, yeah?” Fin asked, his voice lower than it had been moments before. He leaned towards Noah, resting both elbows on the table. “And who would I do that with?”

Noah leaned towards him as though there were some sort of invisible tug coming from Fin. He could tell by the way Fin’s eyelids were a little heavy and the lazy curve of his lips that he’d welcome a kiss in that moment. Noah found he wanted to. He wanted to feel the texture of Fin’s lips against his own, wanted to taste him. His hands became clammy. It felt like the few people in the bar were all staring at them. It didn’t matter whether it was true or not; he could already feel the blood pounding in his head. His stomach lurched at the thought of prying eyes watching what should have been an intimate moment. So, instead of doing what he knew they both wanted, he leaned back.

“I’m sure you can find someone,” he said in what was supposed to have come out as a cocky, laid-back tone but actually sounded really dumb.


Why I Trust You

As Martin spoke, Ryan drew as quickly as he could. He wasn't aiming for anything of beauty, just the gist contained in a series of incredibly rough sketches. It was impossible not to get caught up in Martin's vision. The childlike excitement in Martin's voice encouraged Ryan to smile as he drew, visually realising the story that was beginning to unfold in Martin's rambling and often chaotically organised sentences.

"And that's it," Martin said. "I talked too fast, didn't I? You should have stopped me."

The truth was, Ryan had loved listening to Martin's deep, smooth voice. He'd loved being able to switch off from everything else to focus on nothing but Martin's words and the sketchpad and pencil. He used his phone to snap a few photos of his rough sketches and emailed them straight to Martin.

"Got it," Martin said. "Holy shit. You drew these while I was talking?"

"Yeah, they're kind of rough."

They were more impressions than clear drawings. Bold lines used to create the suggestion of vast detail. But despite that, Ryan was confident that the content of each sketch was clear.

"I'll obviously need to translate all these ideas into digital format and pick a style that'll work across platforms without pixelating on larger devices or looking too visually cluttered on smaller screens. I'll work on some solid graphics ideas over the next few days."

"These are amazing," Martin breathed. "I just… wow."

Ryan felt a warmth surge through his chest. It felt so good to be really, truly appreciated by someone. The fact that it was a guy he'd never met and who lived several thousand miles away only made it hit home how truly miserable he'd become. But that awareness didn't stop the guilt from seeping into every fibre of his being. He was sneaking around behind Zane's back, talking to another guy. A guy whose voice he liked. A guy who made him feel appreciated. If Zane found out, he'd flip out and accuse Ryan of cheating. He gripped his pencil tightly, to the point of almost snapping it in half.

"I'd better go," he said, his voice suddenly weary. "I've got work in a few hours, so I'd better get some sleep." Not that he was convinced he would be able to sleep, as his thoughts were so mixed up about the way Martin made him feel.

"No problem. It's been fun." It really had been. That was the thought Ryan wanted to take away with him, rather than the guilt, but he knew the guilt would win.

Colette’s personal love story began at university, where she met her future husband. An evening of flirting eventually led to a fairytale wedding. She lives in the north of England with her husband, two beautiful children, a crazy dog and a lazy cat. 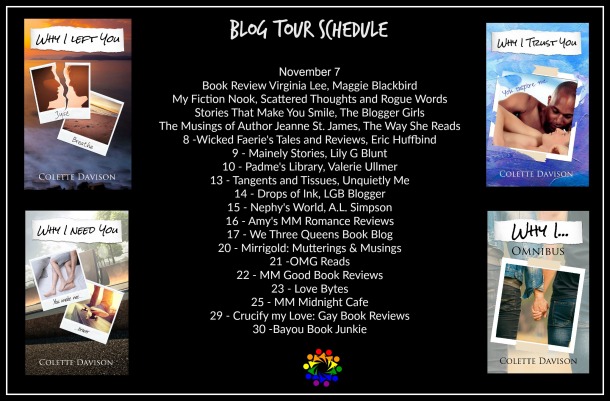