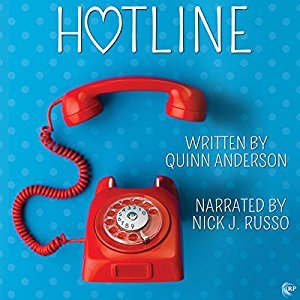 
Zack never intended to become a phone sex operator, but with half a college degree and a smart mouth, his options were limited. It helps that he has a knack for thinking on his feet and a willingness to roll with whatever his clients throw at him. Sure, he gets his fair share of creeps and unconventional requests, but it pays the bills, and he’s in no danger of breaking his one rule: never fall for a client.

Zack is a PSO (Phone Sex Operator) for Murmur Inc. It's not a permanent thing just a temporary stop to pay some bills until he gets himself back on track. But somehow he's been around longer than he'd planed he's fallen into a bit of a rut or at least he was until the day that 'John' calls.

What starts out as a simple phone sex call...just another day on the job for Zack begins to evolve into something more as the calls continues and with each call...each new role play that the men begin, each one of them begins to slip bits of the real them into the story.

For Zack life is getting better...at least on the work front it is. Zack's landed a whale and he's finally good earning money and he's doing it talking to a man who seems to push all the right buttons for him. Needless to say for the first time since who knows when Zack doesn't find work to be a hardship.

John's educated, cultured, lead a life of privilege. In Zack's eyes he's everything that Zack's not or at least that's how he sounds and that's ok because it's just phone sex and they're never going to meet...or at least they're not suppose to but Destiny...she'd be Karma's sister and sometimes she's also a biotch...anyways, Destiny has other plans for Zack and John and when Zack finds himself face to face with John he does what any sane young PSO would do...he runs.


Surprisingly while the sex was good when it happened for me the phone sex was the smoking hot stuff and maybe that was because of the fact that these men didn't know each other and it was obvious from that start that they were going to so there was definitely a layer of anticipation involved that wasn't there when they finally met.

'Hotline' was definitely unique in the overall premise of the story. It's the first story that I've ever read where one of the MCs is a PSO.  'Hotline' was a light fun read, laced ironically a bit of miscommunication and a touch of humor...all of which combines to make an enjoyable little romance story.

Nick J. Russo was the narrator for this story and as always his narration made what would have probably only been a 3 star read for me into something just a little bit better. I could go on about this narrator and expand on all the reasons that I enjoy listening to audio books that Mr. Russo has narrated but I think the simplest thing I can say is in the world of audio book narrators Nick Russo is on my auto buy list.

Reading gives us some place to go, when we have to stay where we are.  (Mason Cooley)