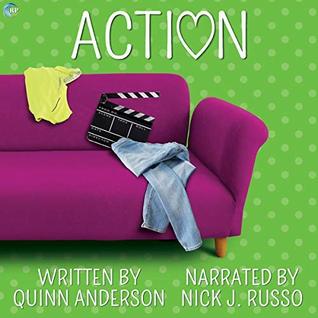 'Action' is the second book in Quinn Anderson's series 'Murmur Inc.' and while 'Hotline' dealt with the phone sex side of Murmur Inc. there's more to this company than a few ringing phones...there're lights, cameras and more than a little action that takes place on film.

Pete Griflow is quiet and gawky. At times he's more than a little awkward when it comes to talking to men...so not happening at least not until he steps in front of a camera and becomes power-bottom...Jaden Prime.

I liked Pete and Kyle together their personalities played well off of each other and while Pete was by far the less confident of the pair he had fleeting moments of confidence and adversely we got to see Kyle struggle with moments of insecurity.

Regardless of the 'too much sex' this story was really saved for me by Pete and Kyle I liked them and as a couple I found them to be really sweet as a couple in spite of what they both did for a living I loved that for each of them sex wasn't just sex when they were the parties engaged it meant something because it was more than the physical there were feelings and their hearts were involved.

'Hotline' was a good start to this story but for me 'Action' was just a tiny bit better and gave me the push I needed to keep this one on my radar...of course I'll be waiting for the next book when it's released on audio and without a doubt I'll have my fingers crossed that the narrator's the same because really...Nick J. Russo...need I say more? maybe not but I'm going to...

Once again Nick J. Russo was the narrator for this story and once again 3.5 stars became a little more...a little better so at the end of it all 3.5 stars becomes 4.

An audio book of 'Action' was graciously provided by the publisher in exchange for an honest review.

Buylinks are provided as a courtesy and do not constitute an endorsement of or affiliation with this, book author or booksellers listed.