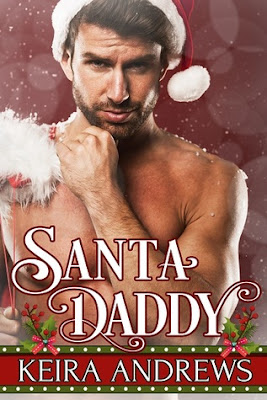 Hunter Adams is hopelessly adrift after college. He’s still a virgin, can’t find a real job, and has no clue what to do with his life. In desperation, he returns to his humiliating old job as an elf at the Santa's Village in his hometown's dying mall. The Santa on the job is an unexpectedly sexy lumberjack, twice Hunter's size and age. He makes Hunter feel very naughty—too bad he's grumpy and intimidating.

Years after the tragic death of his partner, Nick Spini has his beagle and long, hard days on his Christmas tree farm. That’s plenty. But he can’t refuse a loyal friend’s plea for help and finds himself filling in as Santa at the local mall. Despite Nick's attempt to stay aloof, the beautiful, anxious young man playing elf brings out his long-dormant daddy instincts.

When a surprise blizzard traps them alone in Nick’s isolated forest home, their attraction burns even brighter. Will they surrender to the sizzling connection between them and find the release and comfort they crave?

This is an adorably kinky story!

Yes, this book has ALL that and MORE, including spanking, licking, and ... well, let's just say Hunter is a very eager virgin and he's been a bad, bad boy.

Santa, as played by Nick (terribly fitting, no?), doesn't like his elf assistant. Not initially, anyway. And that's all on Nick, who's grumpy and a bit judgmental.

When Hunter is late AGAIN, Nick assumes the worst, then feels like an arse when he realizes Hunter almost froze to death because Nick wouldn't listen.

Fortunately, Nick warms Hunter right up, and then some.

Thumbs up for the age gap, light Daddy kink (this is how I like D/s: mild and limited to the bedroom), Hunter's awesome mom, Nick's friend John who cheers him on, and the lovely epilogue.

The angst is minimal. Hunter is a little insecure and a master of getting in his own way, and Nick has loved, lost, and is scared to love again. But Hunter stands up for himself and gets his man!

I highly recommend this sweet morsel of a holiday story. It's perfectly fluffy and steamy too.