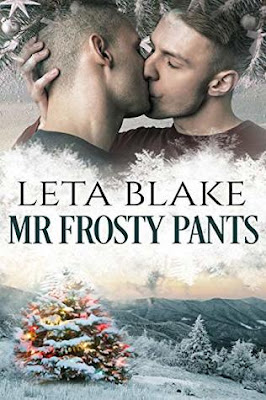 
Frosty former friends get a steamy second chance in this Christmas gay romance!

But it's more complicated than that.

When Casey left for college four years ago, he ghosted his friend Joel. Coming out to his snobby parents was hard enough. Casey didn't want to risk Joel's wrath. He didn't trust enough, even though he'd been in love with Joel for eons.

Joel is prickly and standoffish. He is not an easy character to like, but because the story is told in a dual POV, we see that Joel's sarcastic, aloof exterior hides a heart that's been bruised by his abusive father.

Joel wants nothing to do with Casey's offer to renew their friendship. But then Casey kisses him, and everything changes.

While Joel's father is truly despicable, Casey's parents are more complicated. I think they really wanted the best for Casey, even though they went about it the wrong way. The way Casey's dad treated Joel was unforgivable. And I kind of wanted to shake Joel for making a promise he never intended to keep, a promise he didn't want to keep.

Both MCs have soft edges and rough patches; they are real people. Joel's love for his dog made me smile, and I loved the way Casey cared about Joel and wanted to see him succeed. Joel worried Casey would judge him for living in a trailer home, but Casey couldn't care less about that.

This is a slower-paced novel where the relationship is nurtured and allowed to evolve; it's not always easy, but Joel and Casey talk and cuddle and make love (and holy hell does Leta Blake write amazing sex! *growls*).

The epilogue is warm and passionate and absolutely perfect. When Leta Blake writes sweet, she adds enough angst and hot sex to elevate the story from nice to naughty.

I would love to read more about the secondary characters (like Walker) who were introduced here.